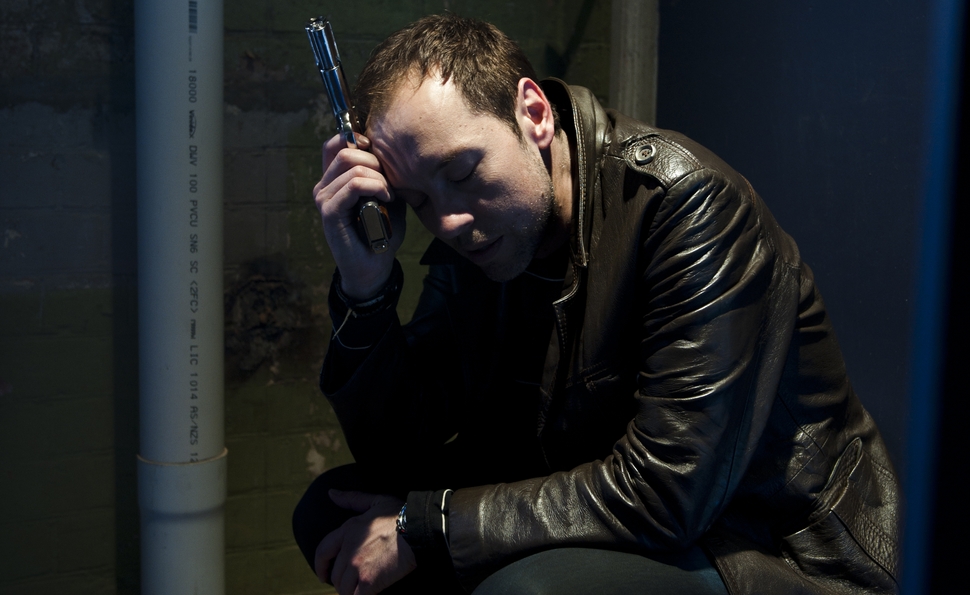 With research ample enough to merit publication in The North American Quarterly Journal Of Ill-Conceived Screenwriting Premises, chronically unhappy Percival (Leon Cain) has devised a theory. The gist of the blandly gritty Aussie drama The Suicide Theory is that no matter what method Percival tries, he’s incapable of offing himself. Due to reasons never made explicitly clear, he’s landed in a catch-22 in which he’s unable to fully snuff out his life unless he feels genuine, complete happiness at the time. He’s willing to subject his theory to scientific rigor, running a series of trials that leave his face latticed with scars and his body dotted with bruises. (Every time he lands back in the hospital after a stymied suicide attempt, the attending physician, who’s all but named Dr. I.R. Ony, tells him he’s lucky to be alive.) But try as he may to meet the cold embrace of death, he’s practically indestructible; he can only kill himself if he doesn’t want to die.

Theories, however, only exist so scientists can pursue answers, and Theory’s best guess at the forces binding Percy to the plane of the living amounts to a gaze into the distance and a quiet whisper of “Destiny.” A fatal excess of meaningless metaphysical jibber-jabber chokes the life out of this film with a totality Percy would envy. Even before the film sputters, wheezes, and falls apart in its third act (see The Reveal), director Dru Brown mires it in life-affirming hokum. Theory’s premise dares to interrogate what, if anything, the apparent randomness of life means. Brown and screenwriter Michael J. Kospiah haven’t the foggiest, but they’re willing to unload as many harebrained plot twists as it takes to obfuscate the question.

At the film’s outset, Percy has had it with his botched suicide attempts. Tormented by the memory of his murdered boyfriend, Percy decides that enough is enough and hires a salty contract killer named Steven (Steve Mouzakis) to put him out of his misery when he least expects it. The nature of the job mandates that the terse, violent man must first help Percy achieve true happiness before blowing his brains out, in the sort of screenplay-ready scenario that’s hard to swallow. Steven is a tough cookie with a melty, gooey inside, and he can’t help but develop an affinity for Percy while working on this unusual assignment. Not so much fast friends as thematically inevitable friends, the pair find that their tragic baggage matches nicely; a drunk driver mowed down Steven’s girlfriend in a crosswalk years earlier. Before long, Steven has strayed from his original mission and gone to shoot the dick off a homophobic predator who brutalizes Percy.

A tonal mishmash of warmth and stark despair prevents Theory from leaving any lasting impression. Painfully generic piano music grants pivotal scenes the tension of the split second before reality-show hosts reveal who’s getting kicked off that week. Brown and Kospiah plant a friendship in a character dynamic not capable of sustaining new life, and despite Cain and Mouzakis’ best efforts, their budding fraternity doesn’t feel believable for a single moment. In one of the few welcome surprises from the film, Mouzakis gamely plays out the unconventional method of mourning that provides Steven with solace after his lover’s death. It feels like a scene spliced in from a different, more mature film. The vulnerability and careful self-regard in that scene only highlight their conspicuous absence from the remainder of Theory. In most cases, it’s poor practice for a film to flash back to events that happened not 20 minutes prior. Not so for Theory, which boasts scenes that can be forgotten the second they’ve ended.

Ultimately, this film sees authors with limited creative means tackling one of the most demanding topics imaginable. Nobody expected them to grasp the greater significance of existence over the course of a feature (especially one operating on such a modest budget, judging by some of the gory practical effects), but audiences still deserve more than the cockamamie parade of twists that closes out the film. This under-thought project could’ve stood three or four more drafts, but the reason why really only becomes clear in The Reveal. For now, however, consider this Theory effectively disproven.