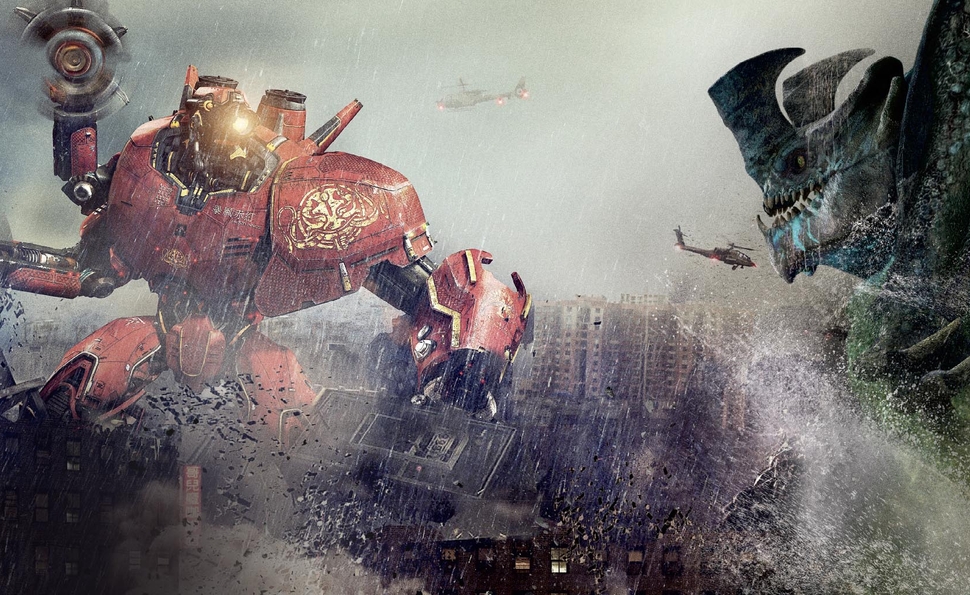 Nobody who wants to see gigantic, well-armed robots battle Godzilla’s contemporary cousins will leave Pacific Rim disappointed. Even jaded viewers who yawned at the release of the Kraken will have to acknowledge that few titans have clashed so impressively—even when the combatants are slugging it out in the ocean, miles from shore (which is most of the time), the sheer scale of the action is awe-inspiring. Director Guillermo del Toro has so much fun staging the various assaults that at one point, he constructs a throwaway gag about desktop physics, in the tradition of Jurassic Park’s coffee-cup ripples. It’s significant, though, that this moment, funny as it is, takes place in a completely empty office building. No human being is present to register it and raise wide eyes to the camera in classic Spielberg style. Like most monster movies, Pacific Rim is at its best when humanity has been all but forgotten, reduced to a puny abstraction.

Unfortunately, the movie aspires to more. Set in a near future, it begins in earnest a few years after an unexplained breach at the bottom of the ocean starts coughing up enormous beasties from another dimension, dubbed kaiju (a Japanese word meaning “strange beast”). Mankind responds by building an army of equally gargantuan robots, called Jaegers (the German word for “hunter”), piloted from within by two people who each serve as one hemisphere of the thing’s brain, early tests having determined that the neural strain was too much for one pilot alone. Renegade pilot Raleigh Becket (Charlie Hunnam) loses his beloved brother/co-pilot in an early battle and quits the program, but his former commander, Stacker Pentecost (Idris Elba), asks him to suit up one last time for a mission that will attempt to permanently seal the undersea breach with a nuclear bomb. He’ll need a new copilot, naturally, and the best candidate seems to be Mako Mori (Rinko Kikuchi), a woman with plenty of buried anger, but no Jaeger experience outside of a simulator.

The most intriguing—yet least explored—human element of Pacific Rim involves what’s known as The Drift: a mental link between a Jaeger’s pilots, in which they share each other’s memories and emotions. Co-pilots need to be Drift-compatible, and Raleigh immediately identifies Mako as a good fit. But apart from one near-disaster in which Mako gets lost in one of her own traumatic memories—there’s lingo for everything in this movie; being sucked into the past is called “chasing the rabbit”—nothing much ever really comes of The Drift, which is otherwise just a generic science-fiction metaphor for good ol’ teamwork. People occasionally describe the bond in conversation (“I felt it”), but its only genuine import on the story appears in a subplot that finds two twitchy scientists (Charlie Day and Burn Gorman) attempting to Drift with a kaiju brain in order to determine the creatures’ intentions. These scenes are as strained in their efforts at comedy—Day sometimes seems to be doing a vintage Bobcat Goldthwait impression—as the Jaeger training scenes are soggily earnest, and Pacific Rim falters badly whenever it isn’t clobberin’ time.

But oh, that clobberin’. The first such sequence expends too much energy making sure viewers comprehend how the Jaegers are operated, constantly cutting back and forth between the pilots performing movements in their goofy spacesuit-style getups, and the robot’s corresponding actions. Too much Wii, not enough “Whee!” Once that symbiosis can mostly be taken for granted, however, del Toro and the ILM crew go to town, so to speak. Kaiju are classified by category, like earthquakes, and there’s a long, slow buildup to the inevitable Category 5 monster, which appears at the climax. But the Category 3 and 4 specimens are all formidable enough to serve as thrilling climaxes to almost any other movie, and del Toro stages the metal-on-tentacle action with the giddy verve of a 10-year-old boy playing with his action figures, even as the F/X wizards conceive every imaginable permutation of physical destruction. (The battles in the ocean, which don’t afford the traditional options of buildings, cars, and fleeing citizens, compensate with spectacular beauty involving great plumes and sprays of water.) Pacific Rim never amounts to more than the sum of its setpieces, but it delivers on the promise of its premise. Giant robots. Killer monsters. Wrestlin’ picture. Whaddaya need, a road map?