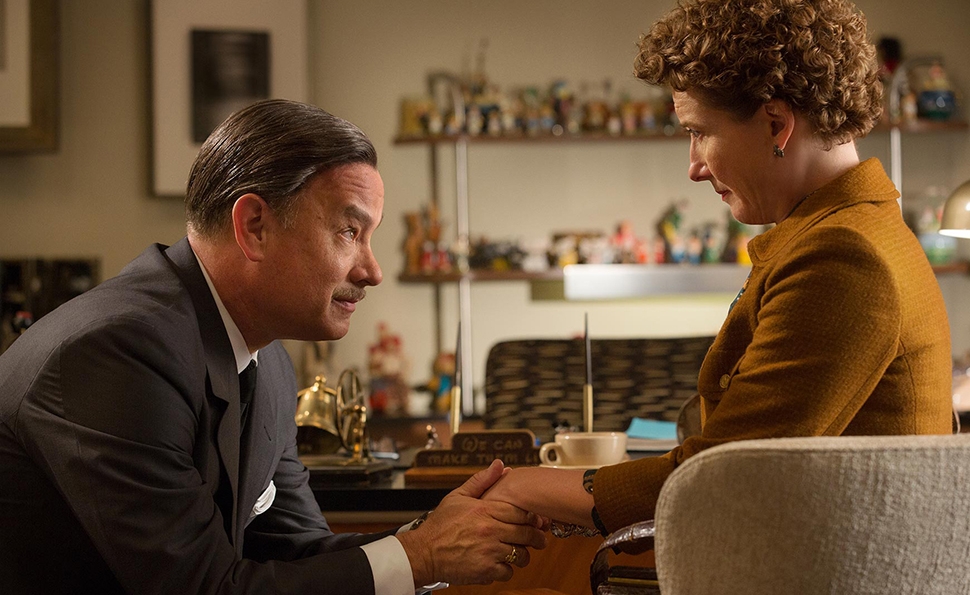 In some ways, it’s surprising that Walt Disney Pictures would make a biopic about a figure as wholly unlikable as P.L. Travers reportedly was, and that it would commit to reinforcing that unlikability again and again over the course of said film. But it’s utterly unsurprising that, in the end, the Mouse House softens Travers considerably, and uses her and her resistance toward Disney as a tool to reinforce the ultimate benevolence of the company and its namesake. Saving Mr. Banks commits to the narrative strategy of tracing one person’s behavior back to a formative tragedy, and then goes a step beyond to suggest that the company behind the film was the catalyst in Travers overcoming that tragedy. It would all seem horribly manipulative and distasteful if Saving Mr. Banks weren’t buoyed by a strong sense of nostalgia and, yes, a good bit of Disney Magic™.

Saving Mr. Banks chronicles the long, difficult process of bringing Travers’ Mary Poppins series of children’s books to the big screen under the Disney banner, a process made much longer and much more difficult by Travers (played by Emma Thompson), a hard, self-sufficient woman who regards fun and frivolity in all their forms as the ultimate affront. This naturally places her at odds with Walt Disney (played by Tom Hanks), who crafted an empire from the idea that fun and frivolity can have deep emotional resonance. Forced by increasing financial hardship and dwindling book sales into a partnership with the man whose pleas to license Mary Poppins she resisted for 20 years, Travers travels from London to Burbank to serve as a consultant on a film she’s determined to see not get made. 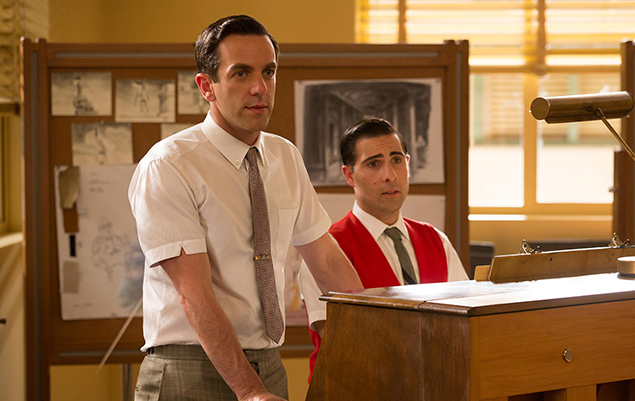 Travers’ efforts to block Disney and his Poppins cronies—primarily screenwriter Don DaGradi (Bradley Whitford) and composers Richard and Robert Sherman (Jason Schwartzman and B.J. Novak, respectively)—at every turn vacillate between bitingly funny and exasperating, but Thompson’s characteristically sharp performance goes a long way toward keeping the scale tipped in the right direction most of the time. Hanks’ Disney is more problematic, in that his characterization never extends beyond Tom Hanks doing a Walt Disney impression, which becomes especially distracting whenever he’s not playing against Thompson. But the scenes the two of them share have a great, prickly chemistry, as her constant rebuffs of his formidable charm leave him flustered in a manner well-suited to Hanks’ talents.

There’s more than enough conflict in the Disney-Travers schism to sustain an amusing Hollywood-outsider story, but Kelly Marcel and Sue Smith’s script, a rescue from the 2011 Black List, goes for the full biopic treatment instead, interspersing the scenes of Travers in Burbank with scenes from her childhood in Queensland, Australia—scenes that all have a direct bearing on the events unfolding in the current day. The film’s mirroring of past and present is frustratingly literal and often distracting; an early scene where present-day Travers freaks out over the inclusion of some pears in a gift basket from Disney exists only to set up a later scene involving a traumatic pear-based incident from her childhood. And once it’s revealed that the young Travers’ father (Colin Farrell) was a whimsical yet troubled man who wasted his life working for a bank, it’s not too hard to see the point at which these roads will converge, at least for those who recall the occupation of Mary Poppins’ workaholic father figure and the film’s draggiest musical number, “Fidelity Fiduciary Bank.”

And yet that convergence ends up being one of the film’s most affecting—though admittedly somewhat silly—scenes. Saving Mr. Banks’ biggest asset isn’t in its cast or its script; in fact, both have significant flaws that keep the film from being more than the sort of pleasant trifle Travers would have hated. (And it seems safe to assume that, if the real Travers disliked Mary Poppins as much as it’s claimed, she would have hated Saving Mr. Banks with a fiery passion.) No, Saving Mr. Banks’ biggest asset is its Disney pedigree—specifically, the association that allows the film to draw heavily on Mary Poppins’ legacy in the form of familiar imagery and especially its unforgettable songs. From the strains of “Chim Chim Cheree” that open the film to a breakthrough moment centered on “Let’s Go Fly A Kite,” Saving Mr. Banks utilizes Mary Poppins’ Oscar-winning score to tremendous effect, using it not just for emotional cues, but often to drive the story itself.

Nobody does nostalgia like Disney, and Saving Mr. Banks has the benefit of drawing that nostalgia from the well of one of the best and most beloved films in Walt Disney Pictures’ 63-year history. If nothing else, Saving Mr. Banks should leave viewers with a desire to revisit the film that inspired it (which just so happens to have a 50th-anniversary re-release coming out at the same time as Mr. Banks), and hopefully a new curiosity about the woman behind it, whose story is much more complicated and compelling than this pat redemption tale forces her into. But Saving Mr. Banks is ultimately what Walt Disney Studios President Sean Bailey called a “brand deposit,” a phrase coined by Steve Jobs to describe actions that improve a company’s perception and influence in the eyes of its customers. (The company has two more “brand deposit” films on the horizon, according to Bailey, in Maleficent and the Brad Bird-directed Tomorrowland.) Those willing or prone to buy into the idea of “Disney Magic” are likely to choke up at least once or twice over the course of Saving Mr. Banks, while those who resist it—the Traverses of the world—will choke on the heaping spoonfuls of sugar the film ladles onto its story. But, in the film’s estimation at least, even the Traverses of the world will have to come around eventually.