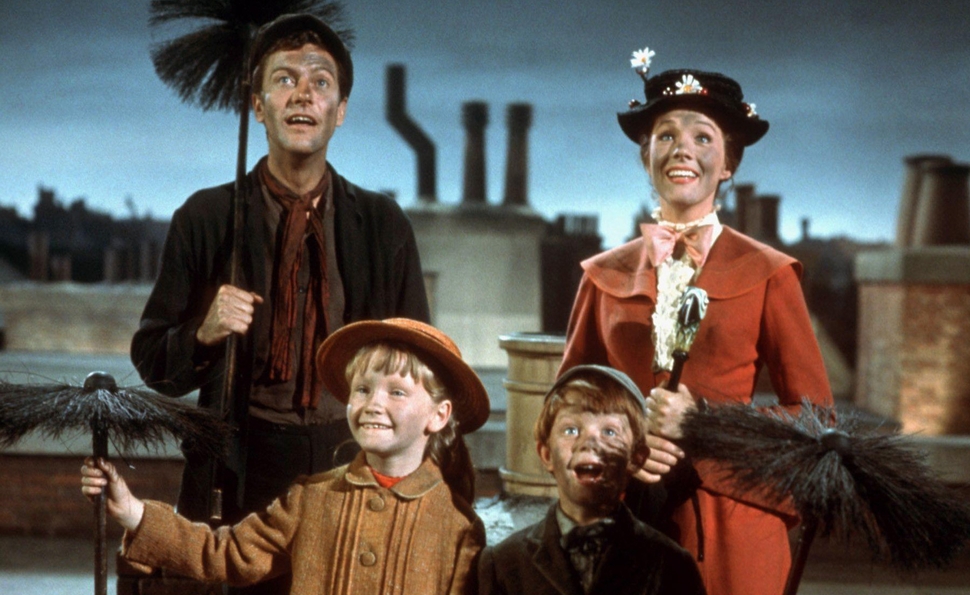 In the opening chapter of P.L. Travers’ 1934 children’s novel Mary Poppins, a no-nonsense nanny arrives unexpectedly at Number 17, Cherry Tree Lane, in London: the home of a busy, highly opinionated couple named Mr. and Mrs. Banks and their four children. Within minutes of Mary Poppins’ installation, she’s brightened the mood of the house with her casual magic—sliding up the stair-rail, pulling endless knick-knacks out of her empty satchel, feeding the kids sweet-tasting medicine—although Mary herself remains aloof, because that’s her nature. She’s fussy and strict, and over the course of Travers’ series of Mary Poppins books, she also reveals herself as subject to whim, often abandoning the Banks family whenever the wind changes, or when she feels like she’s done enough for them. Even at the end of that first chapter, Travers describes how contented everyone is now that Mary is around, then adds, “But nobody ever knew what Mary Poppins felt about it, for Mary Poppins never told anything.”

Travers did not share her heroine’s inscrutability. From the moment Walt Disney and his brother Roy began pestering Travers to let the Disney company make a Mary Poppins movie, she resisted, not wanting her creation to become “Disneyfied.” Travers finally relented, but spent the rest of her life voicing her displeasure over the finished film, released in 1964. The personality conflict between Australian-born Englishwoman Travers and the staunchly middle-American Walt Disney has been the subject of magazine articles, books, and now a movie—the Disney-approved Saving Mr. Banks, which softens the conflict—because it’s such a compelling clash of temperament and ideals. Travers poured a lot of her own life and worldview into children’s books that are funny and imaginative, but also prickly, while Disney never met a sharp, personal voice he couldn’t round off. Besides forging what became, for most people, the safe, definitive versions of classic fairy-tale characters like Snow White and Cinderella, Disney had a habit of flattening out the kinks of distinctive 20th-century U.K. authors like A.A. Milne, J.M. Barrie, Dodie Smith, and Kenneth Grahame.

Even with Travers pressuring him, Disney still made Mary Poppins into a Disney movie. Julie Andrews plays Mary as sweeter and smilier than Travers’ version. Dick Van Dyke’s Bert—a composite of several characters from the books—is an Americanized version of a Cockney jack-of-all-trades, serving as a friendly, unifying companion to an episodic story. Richard and Robert Sherman’s songs are fanciful and spry, with an underlying optimistic spirit evident even when they’re meant to be melancholy. And right smack in the middle of the film, when Mary and Bert take Jane and Michael Banks on an outing, the two children—not four, as in the book—interact with cute animated animals. (Travers especially hated that last part.) So purists do have good reason to be appalled by the big-screen Mary Poppins. Throughout Travers’ books, what comes across most strongly is the Banks children’s fascination with adults—so capricious, so exotic. Disney’s Mary Poppins, by contrast, sanctifies childhood. Mary teaches her charges to be well-behaved and responsible, but not at the expense of having fun, and she eventually enlists the Banks parents in her crusade to put the children first. Most of the characters and scenes in the movie originated with Travers, but their meaning has been altered, sometimes subtly, sometimes egregiously.

Regardless, Mary Poppins is a near-masterpiece. It’s the best of the first wave of Disney live-action features, and the most complete and satisfying musical of any kind that the studio produced until Beauty And The Beast came along. Maybe Travers’ presence had a net-positive effect on the Disney combine, or maybe Walt Disney’s vision for the project was so strong that Travers’ objections proved irrelevant. (This was one of the last films Disney helped shepherd from start to finish, a couple of years before his death). Whatever the reason, there’s a soulfulness to Mary Poppins that was rare not just for the big Disney films of that era, but for the movie-musical genre in the 1960s. So many would-be blockbusters back then were straight and leaden, while Mary Poppins is light, and more than a little weird.

That weirdness is what keeps the movie from being flawless. Some of the comedy—in particular, Ed Wynn’s scene as a man who giggles until he’s weightless, and Van Dyke’s other role as a decrepit old bank-director—plays more goofy and grotesque than funny. But those few overly broad moments are balanced by the artistry of some of Hollywood’s best craftsfolk, working within a well-oiled system. The sets are stunning. The special effects are creative, and still hold their magic. The Shermans’ songs—to a one—are hummable and moving. And whether the movie’s message is Travers-approved or not, the emphasis on joy and empathy proves heartening, even today.

Credit the joy and empathy exhibited by the two leads. Van Dyke is cartoonish at times, but also nimble and wistful, showing a real sense of pleasure in performing, and a real depth of feeling toward Mary herself. And Andrews, in her first film role, is a force of nature. She exudes confidence and inner happiness, whether she’s twirling about or shooting disapproving looks at misbehaving children and adults. She gives Travers’ creation her own equally indelible interpretation. Her Mary Poppins isn’t the one from the books, and yet she’s still practically perfect in every way.

This 50th-anniversary Blu-ray set repeats many of the extras from the 40th-anniversary DVD, the most significant of which is an insightful, not overly nostalgic commentary track that weaves together observations from Andrews, Van Dyke, the Sherman brothers, and Karen Dotrice (who played Jane Banks), adding in a few archival recordings of Walt Disney and director Robert Stevenson. Also returning: interviews and featurettes that go in-depth into the making of the movie, focusing particularly on the music. The biggest new featurette is a Saving Mr. Banks-related piece that has the actor Jason Schwartzman  interviewing Richard Sherman, whom he plays in the film.