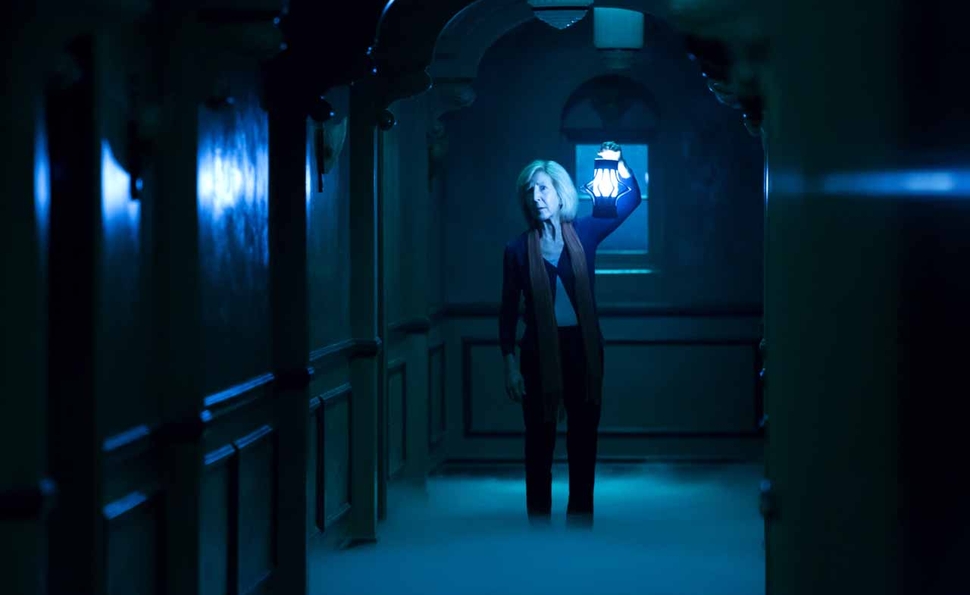 See The Rocky Horror Picture Show with the right crowd, and you’ll hear this loving jeer shouted during the scene in which Brad and Janet get shown to their rooms: “Same room, different lighting, cheap movie!” The same observation could be applied liberally to any film in the Insidious series, but it would have to be delivered more admiringly. Since the first entry appeared in 2011, the series set the standard for delivering shocks on the cheap without dipping into found-footage territory, sometimes by simply re-dressing sets to double as spooky, alternate-dimension versions of themselves. With Insidious: Chapter 3, writer Leigh Whannell takes over the directing reins from longtime collaborator James Wan. (Wan, who left horror for cars with Furious 7, stayed on as a producer, and has a cameo.) Much of the previous films’ effectiveness could be attributed to Wan’s direction and his uncanny command of classic horror-movie mechanics. Much, but not all: Chapter 3 finds Whannell ably assuming command behind the camera, turning in a solid entry in the style of its predecessors. Chapter 3 doesn’t quite fight the sense of diminishing returns that tend to set into horror series after an entry or two. The scares are still here, but they aren’t as novel as they once were.

They’re still scary, though. Though Insidious: Chapter 2 ended with a tease of what was to come, the somewhat confusingly titled Insidious: Chapter 3 doesn’t pick up where it left off. Instead, it takes a leap back in time to the period before the first Insidious film, and before the haunting-prone Lambert family first called on psychic Elise Reiner (Lin Shaye) and her assistants in paranormal investigation, Specs (Whannell) and Tucker (Angus Sampson). It doesn’t leap as far back as portions of Insidious: Chapter 2, though: That film flashed back to the 1980s. This one seems to be set in some unspecified time in the ’00s, based on the amount of time characters spend talking about blogs and using QWERTY-keyboard-equipped phones.

This time, high-school senior Quinn Brenner (Disney Channel vet Stefanie Scott) is experiencing the hauntings, though she mistakes them for otherworldly visitations of a more benign kind. Quinn reaches out to Elise, who reluctantly agrees to try to put her in touch with her late mother, despite having recently retired from the psychic business. In the process, Elise picks up some indications that Quinn might be in danger, thanks to the teenager’s naïve attempts to talk to her mom on her own. “If you call out to one of the dead,” Elise tells Quinn, “all of them can hear you.” She isn’t wrong: Before long, Quinn is distracted by a grotesque figure in a breathing mask while crossing the street, and she winds up with two broken legs. This adds a new complication to her already-chaotic home life, where her perpetually frustrated, newly widowed father Sean (Dermot Mulroney) struggles to keep all plates spinning while still working full time. Also complicating matters: the demonic force putting cracks in the ceiling, pounding on the walls, and grabbing the helpless Quinn.

The best scenes in Chapter 3 take full advantage of the horror of Quinn’s helplessness. In one, the camera holds still as a dark figure slowly fills the frame around her bed. In another, she’s pushed down a hallway that looks like it took decorating tips from the Overlook Hotel. The spookiness recedes a bit in a final act that can’t entirely top what’s come before. It does, however, serve as a fine showcase for Shaye—a gifted character actor whose talents have been served well by the series—and as another chance for Whannell and Sampson to again bring in some much-needed comic relief just as the film starts to tip into unrelenting grimness. Its pleasures are familiar and its frightening bits less frightening than before, but Insidious: Chapter 3 still does right by a series that’s served as proof that, in horror, less can be more. But to keep that standard up, everyone involved should consider learning a few new tricks.