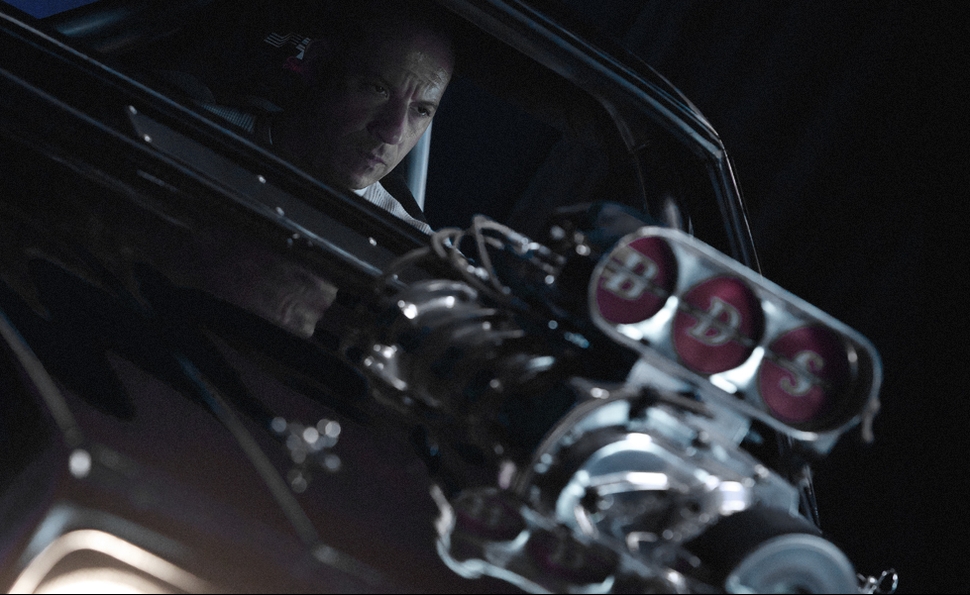 A word-cloud representing the most frequently uttered lines in Furious 7 would be dominated by the terms “family,” “loyalty,” “[grunt],” and “I’m okay!” perhaps with the image of a scantily clad female ass superimposed over the entire thing. The word “car” would be much smaller, which seems counterintuitive for a series built on the chassis of street racers and their souped-up machines. But the automotive aspect of the Fast And Furious series has become a secondary—yet still integral—feature in a franchise that has morphed into an unstoppable beast mutated from the DNA of James Bond, the Mission: Impossible movies, and Ocean’s 11, with most of its brains removed and replaced with ever-more-excessive amounts of brawn. But it’s a dependably friendly, even lovable, beast, one that all but dares uptight viewers to question or be offended by its go-for-broke stupidity.

After wending through an inadvertently twisty timeline that rendered the series’ fourth through sixth films as prequels to 2006’s Tokyo Drift—born mainly of the popularity of Han (Sung Kang), who died in the third film and was then brought back—Furious 7 begins with some obligatory place-setting: After taking down Fast 6 baddie Owen Shaw (Luke Evans), the crew headed up by Dominic Toretto (Vin Diesel) are targeted by even-badder-baddie Deckard Shaw (Jason Statham), an unhinged assassin set on getting revenge for his younger brother’s defeat. Shaw’s first victim, Han, was dispatched at the end of 6—and then again at the beginning of this film, for viewers with a short memory—inciting a ouroboric revenge quest between Shaw and Dom’s crew (sorry, family) of loyalty-obsessed gearheads. Then, because one conflict is too basic for a series set on one-upping itself at every turn, Furious 7 adds on more plot involving super-surveillance software known as “God’s Eye,” the hacker responsible for its creation (Nathalie Emmanuel), and the terrorist (Djimon Hounsou) who’s after it. At the behest of an ambiguously friendly maybe-government-official who calls himself Mr. Nobody (Kurt Russell, having a ball), Dom and his crew agree to track down God’s Eye, under the condition that they can then use it to take out Shaw the elder.

That’s a lot of plot, characters, and continuity for a series committed primarily to blowin’ shit up real good, and the good thing about Furious 7 is that processing the particulars of its plot isn’t essential to enjoying the film. In fact, the film’s greatest pleasures are enjoyed independent of the story, which invites lots of distracting questions about the state of the American military and law-enforcement, reparations for massive property damage, and other logistical flaws inherent to a tale of a ragtag group of non-professionals taking out scads of highly organized and weaponized bad guys. It’s better to view Furious 7’s plot as the engine that propels the movie from one ambitious, insane setpiece to another, an engine fueled by the series’ overarching theme of steadfast (and steadfurious) loyalty.

What makes Furious 7 a serious contender for the title of Fast franchise highlight—challenged only by 2011’s Fast Five and its unmatched vault-heist sequence—is the way it embraces the series’ most basic pleasures while amplifying everything tenfold. After many years and many movies’ worth of juggling characters, Furious 7 settles on the core trio of Dom, FBI-agent-turned-rogue-turned-family-man Brian O’Conner (the late Paul Walker), and Dom’s girlfriend Letty (Michelle Rodriguez), who was presumed dead in 2009’s Fast & Furious, then revealed as alive and amnesia-addled in Fast 6, where she served as a conflicted villain. (Ludacris’ droll tech-guy Tej and Tyrese Gibson’s perpetually grinning himbo Roman also return to function as backup and comic relief, while Dwayne Johnson’s Agent Hobbs bookends the film in what amounts to a large, memorable cameo.) Lettie’s return to the fold and struggle with reclaiming her memories, combined with Brian’s conflicted obligation to his wife (Jordana Brewster) and son, gives the film’s emotional core more genuine weight than the series has managed in the past. (Inevitably, that emotional weight is also informed by Walker’s passing, which the film acknowledges with a characteristically cheesy but nonetheless affecting ending.)

But in addition to that emotional core—which shouldn’t be overstated; in general, Furious 7 maintains its forebears’ broad approach to human interaction—the film is more assured in its integration of the automotive element than the last couple of entries in the series. That assurance stems from these films’ increasingly apparent self-awareness, a winking acknowledgement that while there’s no logical reason to use souped-up cars as the primary weapons in taking out bad guys loaded down with guns (and in this case, helicopters and drones as well), it sure is fun to imagine all the ways cars can theoretically be used as instruments of mass destruction. Screenwriter Chris Morgan, who’s served as the series’ main scribe and guiding hand since Tokyo Drift, is most likely the driving force of this attitude. But James Wan, taking over direction duties from longtime helmer Justin Lin, brings a similarly joyful verve to Furious 7, embracing the series’ visual hallmarks—kinetic camerawork, fast cuts, midair collisions, and music-video imagery—with what translates to unencumbered glee onscreen. For a movie rife with glowering faces, solemn declarations of loyalty, and untold numbers of never-acknowledged innocent bystanders, Furious 7 is borderline-giddy in the way it stacks one action-movie trope atop another for ultimate holy-shit impact. Every major action setpiece is seemingly designed to be relived and dissected by enthusiastic viewers out in the lobby after the film. (“Did you see the way he…” “Yeah, and the way she flipped the thing, and…” “Totally, that was ridiculous!!” See The Reveal for a more thorough accounting of some of these moments.)

But Furious 7 has more than just auto-centric razzle-dazzle in its bag of tricks. More so than any previous entry in the series, this one is bursting with intricately choreographed hand-to-hand combat—informed, perhaps, by the addition of Thai martial artist and Ong-Bak series star Tony Jaa, filling the role of Persistent Henchman and engaging in two memorable fight scenes with Walker. Furious 7 also globe-trots with abandon, staging scenes in L.A., London, the Dominican Republic, Azerbaijan, Abu Dhabi, and Tokyo, giving the film an international flair that contributes to its spy-movie vibe (and, presumably, its overseas box-office grosses as well). Diesel famously left the series without its star for 2 Fast 2 Furious to try his hand at super-spydom with xXx, but Furious 7 brings him closer to the role of James Bond’s heir than that movie ever did. Dom is less cerebral and more prone to whacking guys with a wrench than the current incarnation of 007, but with this movie, he’s ascended to the realm of the borderline-supernatural hero capable of implementing schemes and surviving ordeals that would kill mortal men. Diesel’s performance only partially rises to the occasion—he’s regularly overshadowed in the badass department by Johnson, Statham, and even Rodriguez—but his dependably earnest, enthusiastic presence both onscreen and off is the beating heart that keeps the franchise from becoming a cold-blooded killing machine.

The enthusiasm Diesel personifies is key to the success of the Fast series in general, and Furious 7 in particular. A film with such blatant disregard for logic, the laws of physics, and the right of female extras to not show their asses at every turn seems to invite ironic appreciation at best, outright scorn at worst. But Furious 7’s resolute commitment to being as big, dumb, and loud as it can be, and having a blast doing it, is so ambitious, even admirable, that it’s difficult to find fault even when it’s sitting right there on the surface. Ironically for a series so dedicated to superficial fantasy, the Fast franchise continues to thrive on its deep-set authenticity. Furious 7 knows exactly what kind of movie it is, and it’s determined to be the best damn version of that movie it can be.