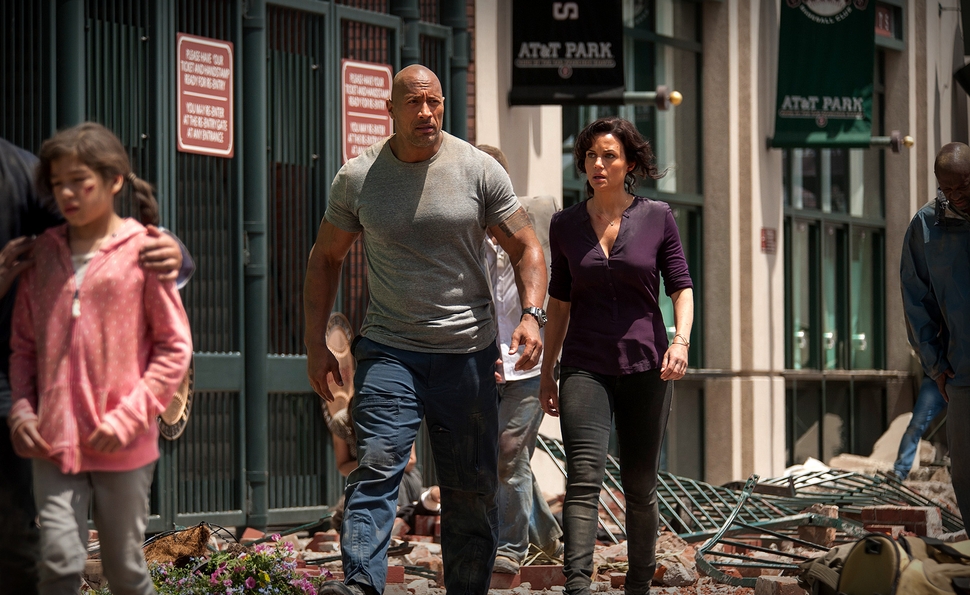 If anyone’s been to the Hollywood library lately, looking for the reference copy of The Big Book Of Disaster-Movie Clichés, and wondering who filched it off the shelf, San Andreas provides a pretty hefty clue. Screenwriter Carlton Cuse (Lost, Bates Motel, The Returned) apparently smuggled it out under his shirt, and hasn’t let go of it since. San Andreas is such a programmatic, by-the-numbers film, genre-savvy viewers could practically recite along with the script. It isn’t a horrendous movie, but it comes from the school of Dance Movie Thinking: “Everyone’s showing up to this film for one specific kind of sequence, and if these sequences are good, who cares about developing all the character and story crap connecting them?”

Dwayne Johnson stars as Ray, a military vet back from a tour in Afghanistan and handling dicey helicopter rescues in California when a series of earthquakes along the San Andreas Fault reduce San Francisco and L.A. (among other places) to digital rubble. Caught separately in the collapse: Ray’s estranged wife Emma (Carla Gugino), their beloved daughter Blake (Alexandra Daddario, who just incidentally is 13 years younger than Johnson and Gugino), and Emma’s insanely rich new architect boyfriend Daniel (Ioan Gruffudd). There’s a long lead-up to the deadly earthquake mayhem, during which personality-free reporter and dumbest-audience-member surrogate Serena (Archie Pajabi) hangs around Ray and prods him to reveal his backstory, then around Cal Tech seismology-studies director Lawrence (Paul Giamatti), eliciting stray chunks of exposition about fault lines. Turns out California is a century overdue for a major seismic shake-up, the kind that requires a lot of horrified staring at computer-generated wave patterns and flashing red dots on maps beforehand, and a lot of Roland Emmerich-style just-in-the-nick-of-time-except-occasionally-not fleeing afterward. Fortunately, Lawrence has just pioneered a new earthquake-prediction model, albeit one mostly used for Hitchcockian tension, by warning people just in time for a little extra pre-quake dread.

The exposition is a major problem in San Andreas: For some reason, Cuse felt he needed a lot of it, and needed it delivered in the most thuddingly straightforward way possible. (Ray staring glumly at a sheaf of unsigned documents labeled “DIVORCE PAPERS” in red is the movie’s idea of subtlety, because it doesn’t involve Serena asking “So, your wife wants to divorce you for being distant and uncommunicative after the tragic death of your other daughter, but you aren’t ready to let go, right?” Later, a character played by Kylie Minogue does actually ask Emma out of nowhere, “So, you had another daughter, but she drowned, right?”) The drama between Ray and Emma largely exists so it can be resolved, via lengthy rote monologues, in a way that spaces out the action scenes. Viewers may have to actively push themselves to feel any emotional engagement in a relationship that consists largely of checkboxes: estrangement, nearly fatal trauma, monologue about feelings, the end.

It’s far easier to get involved in the immersive earthquake sequences. The many rescues are all cartoonishly unlikely, with a casual disregard for physics and biology, but Cuse and director Brad Peyton (Cats & Dogs: The Revenge Of Kitty Galore) made a smart move in making Ray a pilot: During much of the architectural carnage, he has a god’s-eye view of rippling landscapes, collapsing buildings, and cities in flame. More significantly, though, he gets a waterline-level view of a tsunami, in the film’s least-believable but most breathtaking setpiece. San Andreas doesn’t have much interest in the lives lost during its sequence of catastrophes, but it does dole out plenty of the large-scale spectacle that matters in disaster films of this type.

San Andreas doesn’t follow the playbook used by the likes of Towering Inferno and The Poseidon Adventure (or more recently, Into The Storm), the cast-attrition disaster movies where a group of survivors is whittled away one by one, often via heroic sacrifice or cowardly mistakes. Peyton and Cuse’s film is more in the realm of The Impossible and The Day After Tomorrow, where a tiny family group is all that matters, and the tens of thousands of lives lost outside that group are just warning shots over the protagonists’ bow. San Andreas actually apes The Day After Tomorrow so closely that at times, it feels like Cuse just took the latter film’s script, cut-and-replaced all instances of “storm” with “earthquake” and “runs from cold” with “runs from opening fissures,” and called it a day—like Tomorrow, the film centers on a father’s unlikely determination to cross a disaster zone to save an adult child, with only a minimal idea of where his kid might be in a city approaching a population of 1 million.

Disaster movies are rarely sensitive about the actual human cost of disasters, but this one feels unusually callous. Daniel is openly vilified for his craven selfishness in an emergency, but Ray, Emma, and Blake aren’t much more altruistic. All of them occasionally try to steer other panicked people toward safety, but just as often, they walk by bleeding victims without a glance. In one of the movie’s odder moments, Blake loots a fire truck, oblivious to the crowds around her, or the possibility that it’s still in use as an emergency vehicle; she acts like a videogame character, casually glomming up every resource she sees, in case a later level requires it. Similarly, as Ray cruises through a flooded San Francisco randomly looking for Blake, he passes by other victims and rescue efforts without interest. This is a film about family, not about pulling together in a crisis, or even taking a basic interest in humanity. Blake does pick up a couple of survivors early along the way—milquetoast British love interest Ben (Hugo Johnstone-Burt) and his little brother Ollie (Art Parkinson). But expanding her family group by two is a small tradeoff for the protagonists exhibiting more than a glancing interest in anything but their own survival.

And that attitude makes San Andreas feel unusually ghoulish, whether it’s rushing doomed, anonymous people through a city that’s become a morbid funhouse full of fatal traps, or tittering just a bit over its characters’ horror-movie-level poor choices. (When Lawrence realizes a massive earthquake is imminent, just as one of the leads heads to the top of a skyscraper and another heads deep into a parking garage, it’s an unabashed “Don’t go into the isolated murder house alone!” moment.) The film dismisses millions of people in order to focus on a family unit, but without making that family unit more than a bunch of pretty faces with fervently sincere line delivery and a mouthful of well-worn disaster tropes. Cuse might have been better off running off with a guide to creative character-building.