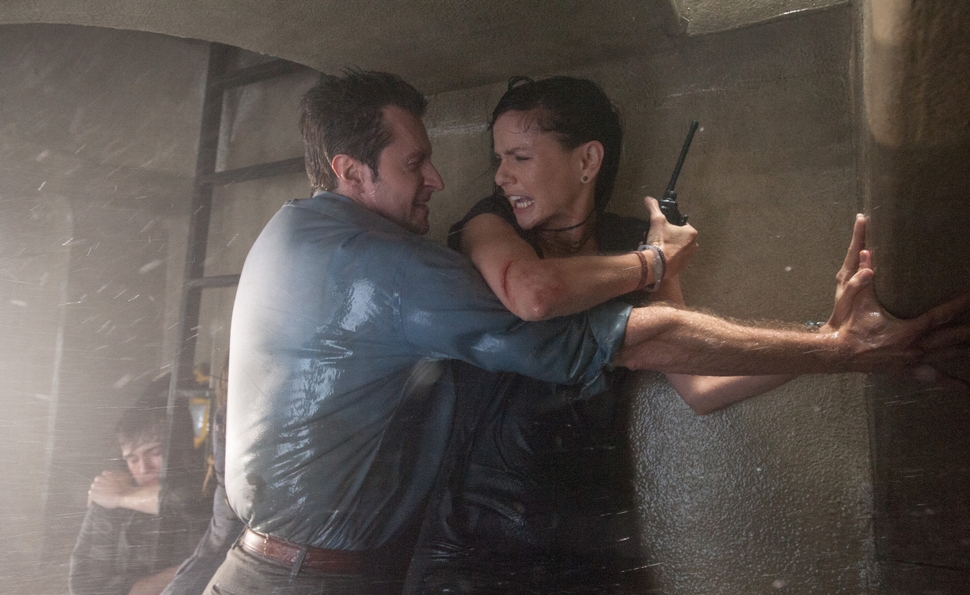 Dear makers of faux-docs, faux-found-footage features, and faux-diagetic films of all kinds: It’s time to stop prioritizing the conceit over the resulting movie. The entire point of a film ostensibly shot on the fly by the protagonists is immediacy and verisimilitude: Films from The Blair Witch Project to Cloverfield to the [REC] series to Chronicle have successfully given the impression that they were made almost accidentally, by people trying to capture the chaos they’ve been dropped into, or by fixed cameras dispassionately, unhelpfully observing while horrible events occur. But the more the audience has to think about the gimmick—where the cameras are and how they survived, why the characters doggedly continue filming when their lives are at stake, and what cruel bastard edited the footage together—the more that sense of realism becomes farcical. In a case like the nature-gone-wild action-thriller Into The Storm, the fake realism gets less realistic with every scene, to the point where what’s meant to be dramatic becomes profoundly silly.

The problems start when director Steven Quale (Final Destination 5) and screenwriter John Swetnam (Step Up All In) cram the film with a busload of superfluous, barely there characters, largely so they have more hands to hold those cameras. It’s clear they wanted people with a wide range of reasons for not sensibly seeking the deepest basement possible when a mega-storm starts spawning tornadoes with the mechanical regularity of a screenwriter building a story around action scenes. But there are so many warm bodies onscreen that it barely registers when a few of them get sucked skyward in twisters; from the start, Into The Storm feels like the kind of slasher film where the protagonists are all strident, dull dinks and doofuses, so their graphic ends won’t sting the audience too badly.

The parade of twister-bait includes a team of documentarians, led by cranky, tense Pete (Upright Citizens Brigade co-founder Matt Walsh), who hasn’t made it to ground zero for a tornado in a year, and is about to lose his funding. In his frustration, he puts the screws to his meteorologist, Allison (Sarah Wayne Callies), and to his three cameramen, who naturally film everything he says and does, just in case it becomes useful for the doc. Meanwhile, brothers Donnie and Trey (Max Deacon and Nathan Kress) are reluctantly filming interviews around their high school for a time-capsule video, on the orders of their father Gary (Richard Armitage), the vice principal, but Donnie sneaks off to a decrepit factory to help his crush Kaitlyn (Alycia Debnam Carey) tape a video application for an internship. And when the tornados start landing, a pair of gleeful redneck Darwin Award candidates identified as Donk and Reevis (Kyle Davis and Jon Reep) charge into the fray, hoping to create a million-hit viral video for YouTube.

Quale and John Swetnam do a relatively convincing job of pretending they care about all these camera-toters, by giving most of them meaningful characteristics and miniature plot arcs. But in the rush to get to the action, most of the backstory is delivered in thudding expository chunks, and drawn as broadly as possible. (Sometimes it’s explained directly into a waiting camera, or whispered by the operator hiding behind the lens.) And the storylines are all corny clichés: Allison hasn’t seen her 5-year-old daughter in three months because of work, and worries about being a bad mom; Gary is a gruff, ungiving, and overly controlling single dad who has his priorities realigned when Donnie is in peril. (His “I have to go back for my son” quest is so freshly yanked from The Day After Tomorrow that there wasn’t time to give it a new coat of paint before it hit the screen.) Turns out, Into The Storm declares, that family matters. So does community. And America. And not being a complete selfish ass.

With these daring moral lessons in hand, the film eventually gets to the payoff: The many special-effects sequences of tornadoes consuming buildings, trees, a burning car lot, an airport, and eventually people. As clumsy as Quale is with the sequences of people shouting exposition back and forth, or delivering teary Blair Witch-style goodbyes into a camera that would have died long before its operators, he handles the CGI action with breathless intensity. Audiences tired of seeing digital cities laid to digital waste may not be inherently impressed, but here, at least, the handheld-camera approach pays off, in scene after scene of people gawking up into a whirling vortex of uncontrollable approaching death. The power and unpredictability of tornadoes gets plenty of play. (Even though, in one of the film’s many patently ridiculous moments, Allison claims it’s necessary to study why storm-of-the-century events are happening annually, before a Tornado Alley develops in Chicago or Los Angeles—as if it’s just a matter of locating the magical tornado “off” button, to save the cities in its path.) While Quale cheats considerably by repeatedly cutting to helicopter news footage for wide-scale establishing shots, he more often dwarfs the cast by giving them a worm’s-eye view of catastrophe. Into The Storm is too over-the-top to tap into current fears about natural disasters: As Allison says, the storm stalking them is like nothing she’s ever seen, meaning it’s like nothing that happens in the real world. And of course the movie builds, like Twister, to the biggest tornado of all time. The scenarios presented feel about as plausible as the one in Sharknado, albeit with more convincing visuals.

But by holding so strongly to the faux-doc format, the filmmakers raise endless distracting questions: Who’s getting this shot or that shot, in the middle of a staggeringly perilous and unmanageable situation? How did the final film come to include footage from cameras seen to be smashed or submerged onscreen? And finally, what exactly is the movie we’re seeing, which was clearly edited and assembled after the fact? At times, it seems to be the documentary Pete was trying to make, but when it ends with a disingenuously, grotesquely manipulative cornball coda, where survivors pick through the rubble and give stirring testimonials directly to the screen, it seems more likely that it’s Donnie and Trey’s time-capsule video. Then again, why would a film made to give hope to the future include the onscreen deaths of so many faceless, nameless community members? The middle of a thrilling action scene is really not a time to be thinking, “Wait, who’s holding this camera?” Until found-footage filmmakers of all types learn to use the gimmick only when it works for the project, annoying questions like these will tend to lurch forward at the most awkward times, when viewers should only be asking, “Who will survive, and what will be left of them?”