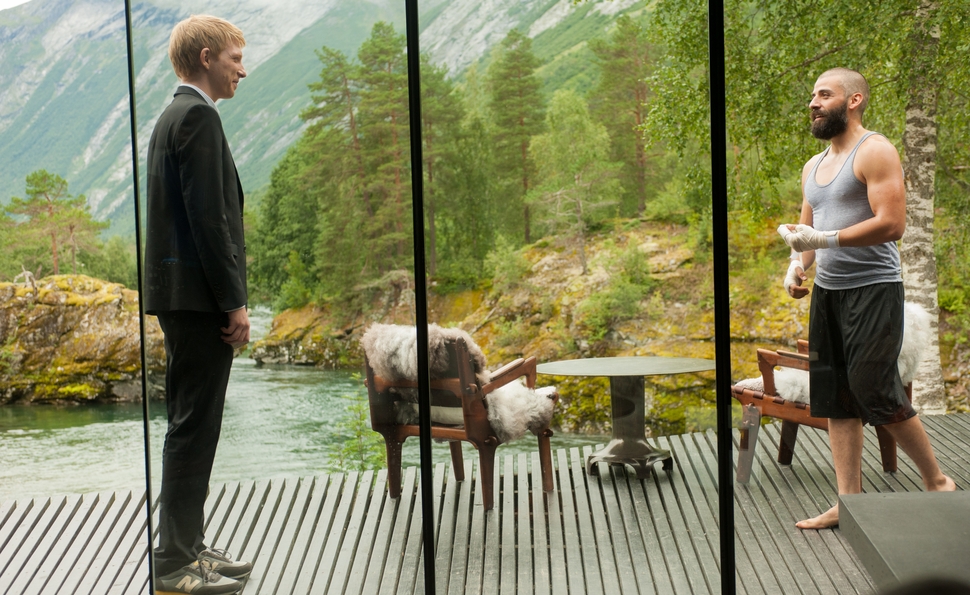 The question of what it means to be human has preoccupied science fiction for decades: Futurism and ideas about new technology, new worlds, and new species have always caused creators to re-examine themselves, and wonder whether there’s anything fundamental to humanity that will stay the same if everything else changes. Even so, it seems like the question has been on filmmakers’ minds more than usual lately, with films as diverse as Transcendence, Under The Skin, and Her all poking queasily at the idea of how a non-human intelligence reflects back on the idea of a human one.

Alex Garland, the novelist who wrote The Beach (which Danny Boyle adapted into a film) and the screenwriter of 28 Days Later and Sunshine (also directed by Boyle), makes his directorial debut with Ex Machina, the latest to take up the thread. In this case, the non-human intelligence is a robot named Ava, and the question is how close an A.I. can come to being human—and, given human frailties, whether she might want to.

Domhnall Gleeson (Frank, About Time) stars as Caleb, a flunky programmer in a vast, industry-dominating computing corporation that’s half Google, half Facebook. When Caleb wins a company-wide contest, he’s granted a week with reclusive, mysterious company owner Nathan (Inside Llewyn Davis’ Oscar Isaac) at a high-tech, remote house where Nathan lives with one non-English-speaking servant (Sonoya Mizuno) and all the comforts of a futuristic prison. Nathan wants Caleb to interact with Ava (Alicia Vikander), who’s imprisoned in her own hermetically sealed quarters, and decide whether she’s a true A.I., or just a crafty program imitating sentience. Inevitably—in fact, immediately—Ava starts manipulating Caleb, seducing him in the hopes that he’ll help her escape. The questions that interest Garland aren’t whether she’ll succeed, but what her intentions are. Or really, what anyone’s intentions are, since Caleb, Nathan, and the servant are all just as opaque and alien in their various ways as the artificial being in her box.

None of Ex Machina’s broad strokes are surprising: The story falls out so predictably at every stage that it can be frustrating. It’s the details that are surprising, and purposefully alarming. Garland shot the film in low light, with a mostly desaturated palette, and in a setting made largely from smoked glass, dull metals, and polished wood. The environment itself becomes oppressively soulless and poreless, a repudiation of the whispering trees and rushing river just outside the walls. The spare, chilly, synth-y score, by nature-doc composer Ben Salisbury and Portishead’s Geoff Barrow, follows suit, with suggestively throbbing themes designed to unnerve viewers and imply a lurking threat. The whole film feels alert and alarmed in a way that makes Caleb and Ava’s mild fencing about identity and intention, and Caleb and Nathan’s more complicated and contentious relationship, seem perpetually on the verge of violence.

Also more interesting than the plot, or the banal dialogue, which lays out the themes guilelessly and without much nuance: the shifting emotions of the piece, which take on more import than what’s actually being said. Caleb initially patronizes Ava gently, as if she were a child or a particularly smart ape. There’s an unmistakable masculine collusion between him and Nathan over her, as if Nathan were pimping her out, which isn’t far from the truth. Garland has Nathan underline his role with a grunting physicality—he’s a physical fanatic, constantly engaged in some form of sweaty, muscle-building exercise—and a series of attempts to get Caleb into a casually joshing, bro-tastic relationship. Ava’s gentle seduction of Caleb is rote, a playing out of old, tired “woman as unknowable mystery” tropes. But what keeps it interesting is that he’s aware of what both she and Nathan are up to, and he holds himself in reserve, fencing with them with what seems to him like sophisticated analysis. It doesn’t save him in either case. The whole film comes across as a claustrophobic, single-set stage play, but also as a three-handed game of chess in which the most confident player doesn’t realize he’s outmatched from the beginning.

Like Her, Ex Machina lacks any real twists, and proceeds along science-fiction lines that will be familiar to habitués. (See The Reveal for more.) But it makes up for its linearity with verve, first in the impeccably controlled, intellectually rigorous direction, and then in the performances. Vikander isn’t trying to seem human so much as she’s trying to seem like a clockwork device performing as a human, and the layers come across cleanly. Gleeson has rapidly stepped into Paul Dano’s abandoned role as everyone’s favorite outwardly well-meaning, inwardly peevish and hapless protagonist bound for trouble. He makes a perfect fit for what seems to be Garland’s favorite role: the Nice Guy whose self-effacing charisma hides a deeply selfish, narcissistic core. But Isaac is Ex Machina’s most important player, tasked with most reliably drawing and repelling Caleb and the audience, and giving the story its spine. He’s the one responsible for selling the film’s queasiest undercurrent: a feeling that if this is what humanity looks like, we’re definitely better off with artificial, alien, inhuman intelligences in charge.