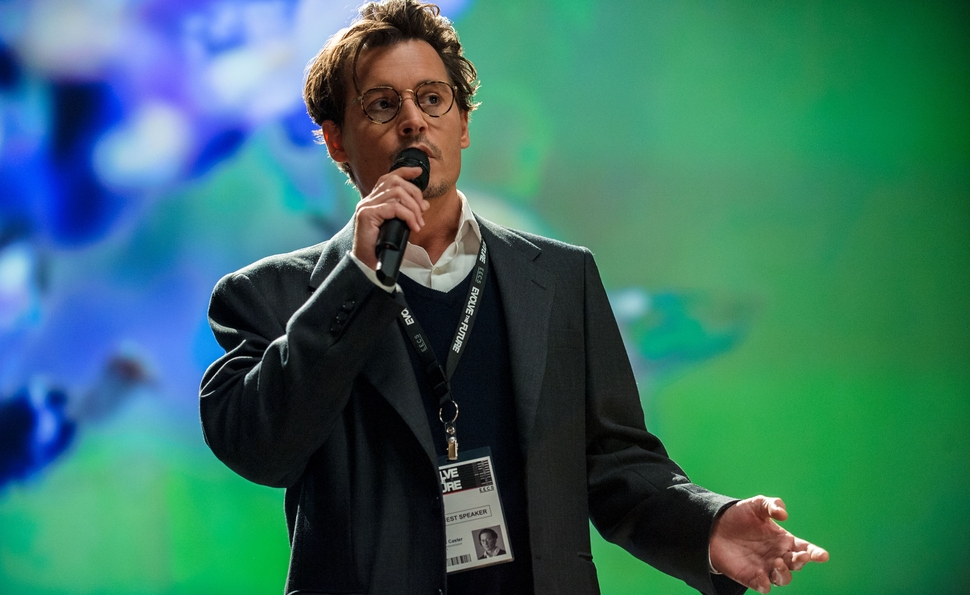 As each new possibility appears on the technological horizon, the movies have a long history of reacting with the sort of abject terror that looks ridiculous years later, when that future comes to pass. With change comes panic, and with panic comes an assessment of advancements—virtual reality, the Internet, artificial intelligence, et al.—that crosses into Luddite hysteria. Though Wally Pfister’s paranoid thriller Transcendence attempts an ambiguous view of the Singularity—the idea that artificial intelligence will advance beyond human intelligence, and perhaps render organic life as outmoded as the Walkman—it ultimately has tech-apocalypse on the brain. At the very least, if the film were a human being, it would be glaring at people who check their smartphones incessantly.

Transcendence opens after the collapse of civilization, when the Internet has gone offline, power grids are down, and computer keyboards are being used as doorstops. The wreckage is described by Paul Bettany’s narrator like the head-on collision between technology and humanity, but flashing back five years, the film questions whether the tech-utopia scientists are building toward would be any more appealing. At the cutting edge of the field is Will Caster (Johnny Depp), who, along with his wife Evelyn (Rebecca Hall), sees advancements in artificial technology as a catalyst in curing poverty and disease, ending hunger, and generally healing the planet. But his dreams are cut short by a sophisticated group of anti-technology extremists who carry out a series of terrorist attacks at labs across the country, and send a suicide shooter after Will.

Though Will survives, the bullet was radioactive—one of those special movie bullets that gives him a few weeks to live before he’s poisoned to death. In that time, Will successfully achieves “transcendence” by becoming a presence in a larger machine, which has the evolutionary capabilities he and Evelyn dreamed about. But there are downsides to the absolute power Will commands in his creepy Oz-like way, and Evelyn, along with old allies like Max Waters (Bettany) and Joseph Tagger (Morgan Freeman), start to sympathize with the terrorists’ point of view.

Arriving just a few months after Spike Jonze’s Her, Transcendence inadvertently shows how beautifully Jonze’s film handled the Singularity’s implications without losing its shit over it. It probably helps that the AI in Her functions primarily as a metaphor for evolving relationships, but Pfister and screenwriter Jack Paglen address the Singularity with more fear than imagination. As Will’s power grows, so do the film’s worries about technology breeding digital demagoguery and mind control. Transcendence wants to use this future panic to comment meaningfully on our current interconnectedness and inorganic lifestyle, but it’s screaming too much to have that conversation.

Making his directorial debut after serving as cinematographer on all Christopher Nolan’s films since Memento, among other credits, Pfister attempts to fuse ideas and studio spectacle like Nolan’s Inception. But Transcendence is weak in both areas, advancing a take on technology that’s more confused than ambiguous, and realizing the healing powers of “the machine” as weird fields of silver nanobot tendrils clouding the air. With Depp relegated to a Max Headroom-type stalking his wife through a series of digital-projection screens, the other humans in the cast are kicked around between allegiances to Will’s project and the suspicion that the terrorists might be right. Transcendence doesn’t seem to take a firm position one way or the other: Whatever happens, it implies, will be cause to freak out.