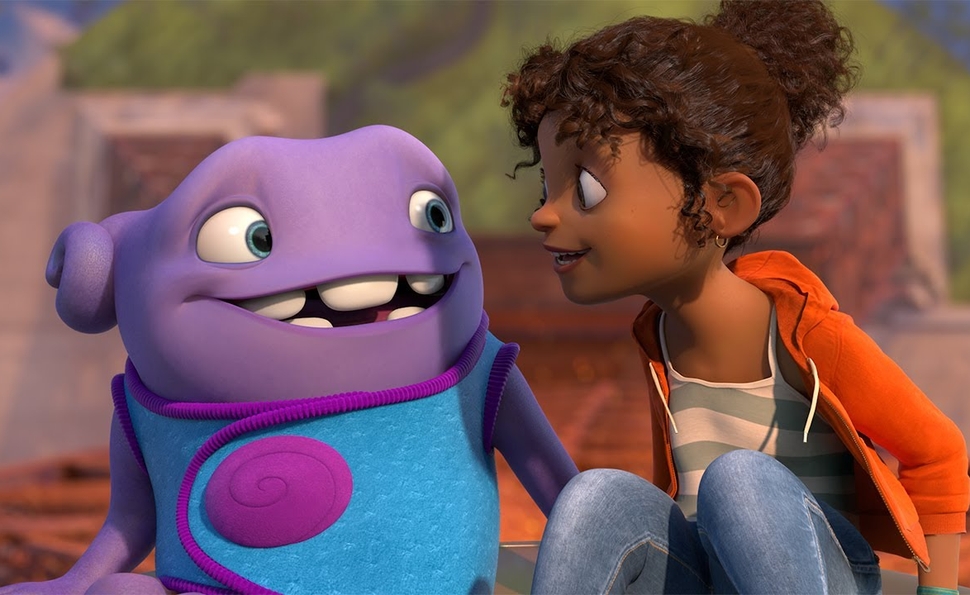 Saddling a uniquely titled children’s book like Adam Rex’s The True Meaning Of Smekday with the ultra-generic new title Home, DreamWorks Animation’s latest computer-animated feature seems intent on being as inoffensive and unmemorable as possible. It doesn’t completely succeed in either regard, but Home does give off a curiously dinky vibe, as if DreamWorks—which shunted the film from its original November 2014 release date to make room for the first Penguins Of Madagascar movie—prematurely gave up on the idea that Home could stand alongside the company’s animated franchise-starters like How To Train Your Dragon, the Madagascar series, and even The Croods, which currently has a sequel and TV series in the offing. Directed by DreamWorks Animation journeyman Tim Johnson (Over The Hedge, Antz), with a primary voice cast of only five—anchored by the supremely strange trio of Rihanna, Jim Parsons, and Steve Martin—Home feels oddly small-scale for a globe-spanning science-fiction adventure story featuring aliens and flying cars.

But Home’s incongruously humble vibe works well for what’s at heart a buddy road movie, centering on Oh the outcast alien (Parsons) and Tip the outcast human (Rihanna) learning to overcome their differences—there are many, given the whole alien/human divide—on their way to saving the world. The film begins with perhaps the friendliest alien invasion in cinema, courtesy of Oh and his fellow Boovs, a squishy, color-shifting, block-shaped race that travels from planet to planet in hopes of outrunning the Gorg, another alien race that’s chasing them. After descending to Earth in their colorful, bubble-like spacecraft, the Boov forcibly—but nicely!—relocate all humans to a crowded but pleasant-seeming refugee camp in Australia. That includes Tip’s mother (Jennifer Lopez, whose casting constitutes a meta-joke; in Rex’s book, Oh’s character calls himself “J. Lo”), but not Tip, who’s accidentally left behind in her apartment to fend for herself. Meanwhile, the hapless Oh, whom the rest of the Boov overtly despise, attempts to lure potential friends to his housewarming party by hitting “send to all” on an electronic invitation, accidentally transmitting his location to the entire galaxy—including the Gorg. Yes, Home’s plot turns on an e-mail snafu.

Oh’s mistake makes him an even greater outcast than before, and a target for the Boov’s idiotic but respected leader, Captain Smek, whom Martin voices with utmost goofiness and smarm. On the run from Smek and his Boov brethren, Oh falls in with Tip and promises to help her find her mom, and Home’s best qualities come to the fore. As Oh, Parsons plays a cuddlier, more childlike variation of his Big Bang Theory character Sheldon, an outcast who doesn’t understand the emotional and comedic cues of the humans around him, and most of the humor between him and Tip mines that vein. (It also throws in a few fart and toilet jokes, because DreamWorks productions seem to have a really hard time not doing that.) For her part, Rihanna brings some unexpected nuance to the seventh-grade anxieties of Tip, not to mention inspiring the sort of backstory (like Rihanna, Tip is Barbadian), skin color, and natural hairstyle that is rarely seen in the main character of a mainstream kids’ movie. And the duo’s vehicle of choice on their quest—a beat-up car that Oh merges with a Slushie machine, somehow giving it the power of flight and other improbable abilities—is representative of the sort of overtly silly, fantastical, candy-colored appeal Home displays in its best moments. Everything about Tip and Oh’s dynamic of the plucky, resourceful heroine and her kooky, magical sidekick is by the book, but Home delivers its reading well, striving for, and sometimes achieving, the sort of buddy pairing that made DreamWorks’ Dragons movies so enjoyable.

But as the stakes get higher, Home’s fidelity to convention becomes a greater deficit, and its main characters less of an asset. As it moves toward its climax, Home eschews the sweet, colorful, interpersonal aspects of its superior middle segments, and adopts a blockbuster, city-destroying scope that feels unearned and incompatible with the featherweight pleasures that came before. And while Oh and the Boovs’ cartoonish cuteness is targeted directly at the kids in the audience, they can tip over into obnoxiousness fairly quickly, depending on viewers’/parents’ tolerance for their manner of speaking, which aims for the nails-on-a-chalkboard midpoint between Yoda and Jar Jar Binks. (The Boov are seeking a “planet for to hiding”; Oh responds to Tip’s request for a “pee break” by saying “I too has to break pee.” And so on.) As large-scale business involving Captain Smek and the Gorg takes up more focus, Home loses track of its central pair in a story that asks them to save the world in the most predictable manner possible, then grafts their emotional arc onto that story in an unsatisfying way. But it does set the stage for a world where Oh and Tip can continue having adventures together over the course of many subsequent movies, if audiences deem them worthy. So maybe DreamWorks hasn’t given up on Home just yet.