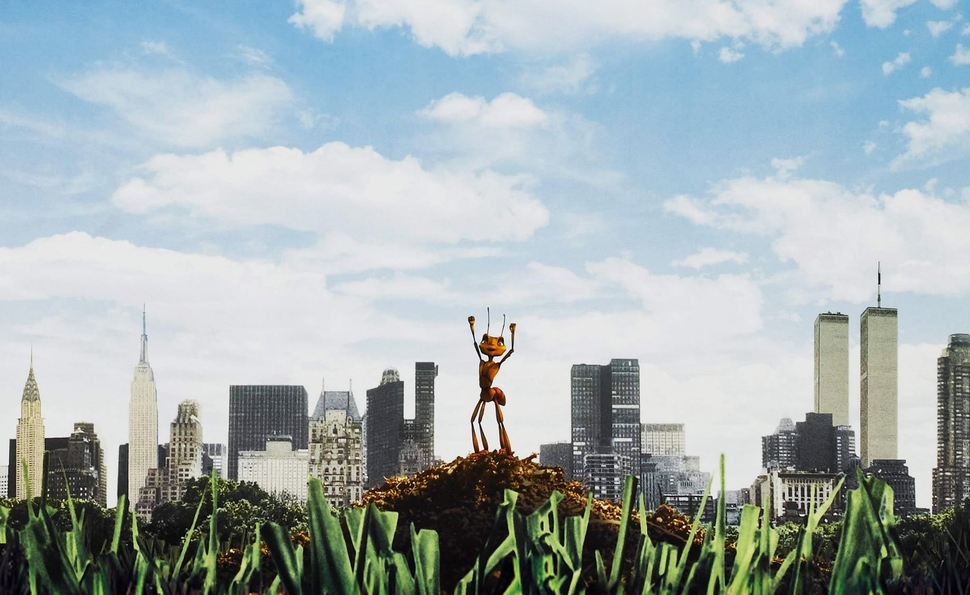 Antz beat A Bug’s Life to theaters, but still became an also-ran

It can be easy to forget that at the start of its run, DreamWorks Animation was viewed by many as a Pixar knock-off factory, churning out Great Whites to Pixar’s Jawses. That’s an inapt comparison, though. Where others who work in the knock-off world, like Roger Corman and Asylum, deal in the film equivalent of a bargain basement, DreamWorks Animation’s knock-offs were respectable and slick. That false perception is mostly attributable to the unusual case of Antz. When it hit theaters in 1998 it was, after Toy Story in 1995, only the second feature-length computer animated film ever made. Yet it was already widely considered a knock-off to a presumably superior Pixar movie that hadn’t even come out yet. How is that possible?

The production schedules for animated movies can stretch on for years, and Pixar in particular is famous for allowing projects to undergo radical transformations. Old directors and plots get dropped and new directors and plots get introduced. This is true even of some of Pixar’s best loved and most successful films. Normally, an extended production schedule is a sign of trouble; with Pixar, it’s more often a badge of honor, a concrete sign that the studio rightly considered the gold standard for contemporary animation is willing to take years and trample feelings in order to make its films perfect. With Pixar, there’s a sense that the company is always aiming for posterity, that it wants its films to be revered 50 years later, not just score big opening weekends.

Before Antz began production, Pixar was already deep into a project then known as Bugs, a film that would eventually become A Bug’s Life. Pixar, riding high on the success of Toy Story, smelled a rat. Once friendly with Jeffrey Katzenberg, who resurrected Disney’s animation wing during his time there before leaving acrimoniously to start DreamWorks with fellow Masters Of the Universe Steven Spielberg and David Geffen, Pixar’s John Lasseter did not receive news of Antz’s production well. It was suspected that Katzenberg had simply stolen the premise for Bugs and encouraged his animators to work long hours so that Antz would beat its inspiration to theaters, even though Katzenberg traced the projects’ roots back to an older pitch.

DreamWorks was able to save valuable time by skimping on quality. Where Pixar benefits from a well-honed perfectionism, early DreamWorks productions like Antz often just seem to aspire to be good enough. When Antz hit theaters in 1998 and became the 21st top-grossing film of the year, the concept of a feature-length computer-animated film still held an element of novelty. There was still something revolutionary about the concept of making entire animated films with computers instead of hand-drawn cels. Some 17 years and countless advancements in technology later, Antz still retains a bit of the shock of the new, even if it looks less impressive than the Pixar film to which it was destined to be compared. 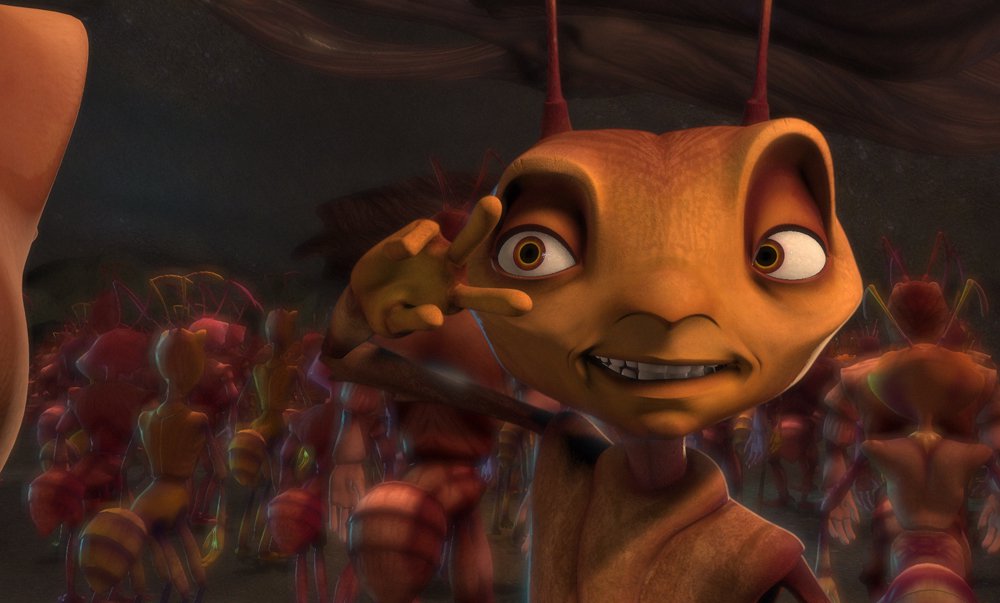 Antz essentially has the same premise as A Bug’s Life: A misfit insect discovers his destiny is far greater than he ever could have imagined. But what Antz lacks in technical sophistication and elegant animation, it makes up for in star power. The filmmakers lazily, if effectively, solve the problem of getting audiences to care about interchangeable insects by voice-casting actors whose personas are so well wrought that they can be easily translated to the insect kingdom. Then to get the most out of their investment, they also animated the ants to look as much like the superstar actors voicing them. To embody the existential angst of the everyman insect, DreamWorks turned to the neurotic comedy stylings of Woody Allen, a move that proved to be as winning as it is perverse. Before and after Antz, Allen was nobody’s idea of a big box-office attraction. Yet put that nasal voice and wimpy mock-aggression inside the digitally rendered body of a cartoon insect creepily conceived to look as much as the real-life Allen as possible, and suddenly he became a bankable movie star.

Allen stars as Z, a worker ant first introduced on an analyst’s leaf complaining about how he didn’t get much attention being the middle child of 5 million. There’s a rich strain of vaudeville and the Catskills in the way Allen delivers his signature one-liners in a new form, but Z isn’t just on hand to crack wise. At times Antz resembles Bananas remade as a kiddie cartoon, as both feature nebbishy Woody Allen characters who accidentally become revolutionaries while attempting to get the girl. But Z has more on his mind than his own neuroses, and Antz takes this timid insect on a hero’s journey that would do Joseph Campbell proud.

As the film begins, Z is a lost man, just one of millions of workers diligently moving dirt from one place to another for the sake of the greater good. Oh sure, he has friends like a super-strong ant voiced by the super-strong Sylvester Stallone, but like the protagonists in all children’s movies, he hungers for more. Z gets a glimpse of a world bigger and brighter than the vaguely communist dystopia he finds himself mired in when a drunk at a bar talks blearily but passionately about a heaven on earth called Insectopia. Then Z ends up dancing with a slumming Princess Bala (Sharon Stone), the daughter of the queen and the fiancée of psychotic warrior General Mandible (Gene Hackman). It would be nice if Allen and Stone were the Tracy and Hepburn of opportunistic cartoons, but they have so little chemistry that when Z tells Princess Bala, “I was going to include you in my erotic fantasies,” the effect is more creepy than romantic.

Antz is littered with inspired gags, like a pair of wasps, voiced by Saturday Night Live alum Dan Aykroyd and Jane Curtin, who embody all of the stereotypes of human WASPs in insect form. The production design for the individual ants is more than a little creepy, but the animators do well with world-building and elaborate fights between overmatched ants and massive, almost prohibitively huge termites who spit acid at their foes. 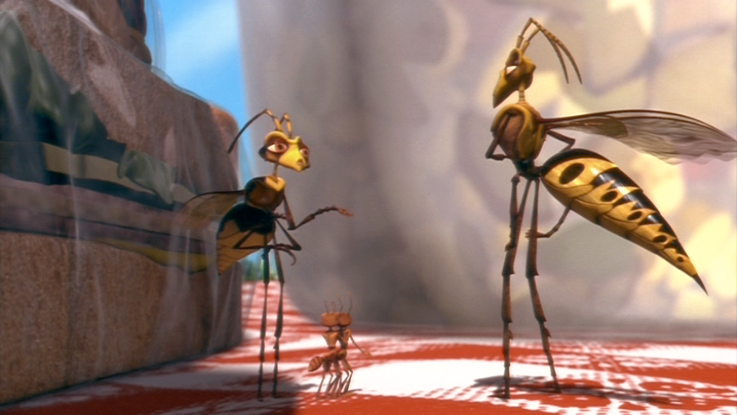 If the film succeeds artistically, in addition to commercially, that’s probably because it sets the bar so low. Where Pixar set out to evolve and revolutionize the technology of animation and join it with the best storytelling in the world, Antz simply set out to use flashy new technology to tell an old but satisfying story of a common protagonist who finds the courage to embrace his destiny and stand out from the crowd. Antz isn’t quite as tacky as I remembered it, though everything about its cast carbon-dates it as a product of 1998, particularly the pairing of Stallone and his love interest, Azteca (Jennifer Lopez). Stallone yelling “You da ant!” at Z after his moment of ultimate triumph is thankfully the groan-worthy exception rather than the rule. From the perspective of 2015, I appreciated the lack of pop-culture references, pop songs, and montages that would soon become synonymous with DreamWorks Animation, thanks in large part to the Shrek series, which was just over the horizon.

A Bug’s Life ended up getting released the same year as Antz and outgrossed it at the box-office substantially, coming it at No. 4 for the year. As knock-offs go, Antz is nowhere near as embarrassing as previous Forgotbuster subject A Shark’s Tale, another DreamWorks Animation project that gave the Poochie treatment to Pixar’s Finding Nemo. Yet there’s very little that stands out about Antz, either, for good or ill. And though Antz won the race to the theaters and made a mint, it has, like most of the other Forgotbusters I have written, faded in the cultural imagination, becoming an also-ran at the heady early days of feature-length computer animation. Antz crossed the finish line first without actually winning the race.

Katzenberg’s shamelessness in wanting to get his plucky-insect movie out before Pixar’s tarred DreamWorks Animation with a reputation for being tacky, vulgar, derivative, and mercenary, pejoratives that are seldom associated with Pixar. It’s taken the studio decades and terrific, original films like How To Train Your Dragon to start to shake off that reputation. It still clings a bit, however: No matter how hard DreamWorks has worked to be something more, it remains second-best.