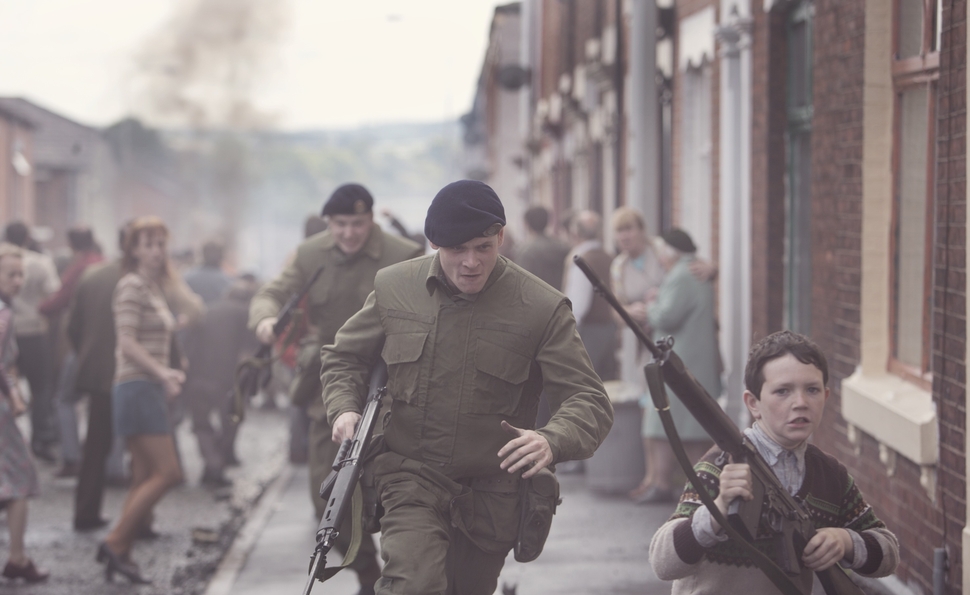 ’71 opens with a fakeout: the sounds of what seem to be gunfire and rioting play over a black screen. But when the image is added, the noises turn out to be from a boxing match. It’s the only time in Yann Demange’s remarkable directorial debut that he uses outright misdirection. For the remainder of the film, though it’s filled with double-crosses and lies, he plays fair. The result is a master class in structure, a meticulously constructed period piece, a powerful anti-war film, and rarest of all, a thriller whose tension and suspense feel genuinely earned.

The film is set in Belfast—guess the year—but the important thing is that 1972 was the most violent year of the Troubles; ’71 is prologue. Starred Up and Unbroken star Jack O’Connell plays Gary Hook, a new recruit shipped off to Northern Ireland at a time when his commanding officer could still say “You are not leaving this country,” and sort of mean it. On his first assignment in Belfast, under the command of a hopelessly naïve CO (“I’m a bit of a new boy myself,” he tells his troops), he gets separated from his unit and has to make his way across the city.

So far, so simple. But any film trying to depict Belfast in 1971 runs the risk of descending into alphabet soup. The political factions active that year included the Irish Republican Army (IRA), the new, more violent Provisional Irish Republican Army (PIRA), the Ulster Volunteer Force (UVF), their rivals the Ulster Defence Association (UDA), the highly militarized Royal Ulster Constabulary (RUC), the British Army’s Military Reaction Force (MRF, a covert branch that by 1972 evolved into a roving anti-Catholic death squad), and the British Army, ostensibly there only to keep the peace. And those are just the people with weapons. Yet somehow Demange and screenwriter Gregory Burke manage to wade their way through all of this with virtually no exposition.

The trick turns out to be structural. ’71 is episodic: There are eight main sequences in Hook’s journey across Belfast. In most of them, only one or two of the city’s factions are involved, and they’re introduced with a simple, immediate goal, not a master plan. Rather than an exposition-heavy speech about the RUC’s troubled relations with the citizenry, Burke structures a scene so they roll up in Humber Pigs and start merrily swinging truncheons; viewers know the PIRA is worse than the IRA because they’re introduced shooting a soldier in the head. The only pure exposition scene, a by-the numbers military briefing that explains the city’s geography, becomes a sick joke the moment the Army enters Belfast, finds all the street signs missing, and gets woefully lost.

Each sequence has its own pace, tone, and look, from a breakneck foot-race through a warren of narrow brick alleys to an almost fairy-tale-like section in which Hook is led through nighttime streets by a child. What they all have in common is a steadily mounting dread. There’s a moment in the middle of the film where Demange and cinematographer Tat Radcliffe crank up the sodium lighting until everything’s a sallow, hallucinogenic yellow, and it feels like the film could veer off into allegory, like some kind of Irish Troubles version of John Cheever’s “The Swimmer.”

Instead, Burke and Demange bring things back to reality in the harshest way possible, sending Hook to the brutalist nightmare of the Divis Flats (gone now, but ably doubled by the equally miserable-looking Park Hill estate in Sheffield). The finale brings all the warring factions together, and Burke and Demange, after carefully stripping each sequence to simple goals and conflicts, finally let everything collide. “It was a confused situation,” one character says later. But even in chaos, ’71 lets everyone have their reasons.