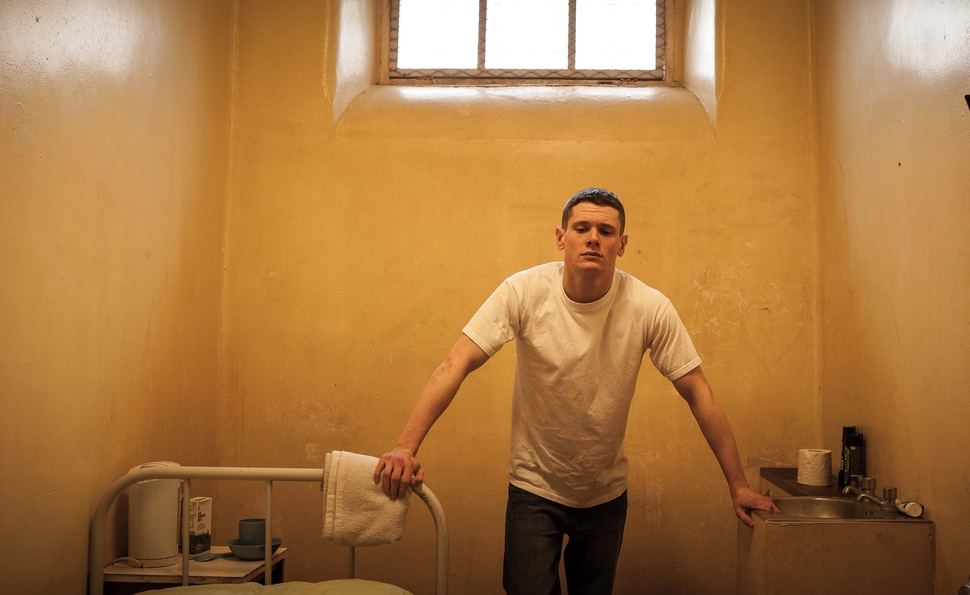 Starred Up, the latest from Scottish director David Mackenzie (Perfect Sense, Young Adam) begins with an assured, unhurried six-minute sequence of its protagonist being processed as a new inmate at a high-security prison. There’s no exposition, no guards casually telling each other what he did to wind up in jail, or interviewing him to expose his backstory and personality. The dialogue is minimal and functional, all curt orders and mechanical steps. But the shots of Eric Love (Jack O’Connell) calmly stripping and squatting for contraband inspection, accepting his new-prisoner kit, and obediently waiting at each successive barred door as a guard locks the previous one behind him, all tell a clear story. At age 19, he’s a veteran of the prison system. Nothing about it surprises or alarms him; the process is already an old routine. So is the way he expertly builds and hides a razor-blade shiv the second he gets to his cell. Before he’s spoken a word in the film, he’s revealed everything about his mindset: cooperative when it suits him, but ready for violence. And, just incidentally, locked behind about a dozen heavy barred gates, far from any hope of freedom.

So goes all of Starred Up, a terrific prison drama that rarely lets up on the tension, and never long enough to pause for explanations. Screenwriter Jonathan Asser—working from his own experience as a prison counselor—expects viewers to keep up with this greyhound-lean story, where virtually every scene is a separate tersely meaningful chapter, revealing something new and important about the prison or its denizens. Sometimes a quick glimpse of an item, or a single line—delivered in a thick accent and near-impenetrable slang—is the only clue offered about a situation. But even if the dialogue isn’t all clear on a first viewing, the emotions are, because they’re all so big and primal. When every moment of anger, jealousy, or fear is accompanied by raging violence, it’s hard to miss how people feel.

Eric is “starred up”—slang for a high-risk juvenile offender remanded to an adult prison—and has just been moved to the same prison where his father Neville (Ben Mendelsohn) has lived for most of Eric’s life. Given the opportunity to finally parent his son, Neville overcompensates for his long absence with oppressive control. Meanwhile, Eric makes it clear, early and often, that his life has taught him to attack full-throttle whenever he considers himself challenged, and to escalate ruthlessly if anyone fights back.

Like Jacques Audiard’s A Prophet, the last prison drama to have this kind of spare, merciless, impeccably crafted impact, Starred Up deals with a prison ecosystem full of longstanding criminal alliances, a well-established hierarchy, and easy enmities. But where A Prophet’s 19-year-old prison newbie starts out as a babe in the woods, in need of protection and education, Eric is a ferocious, mesmerizing force of chaos. His unpredictability gives Starred Up its relentless drive; his refusal to back down even when he can’t possibly win, or even escape punishment for defiance means there’s no limit to what he might do next.

What makes Starred Up more than a one-man show—though it comes close to that at times—is the sense that Eric is a disruptive stone dropped into a deep pond, one that existed long before he came along, and is rarely free of one kind of ripple or another. Mackenzie relies heavily on a fine, nuanced cast who effectively communicate with glances and postures, which becomes crucial, since there’s so much going on in every scene, and so little time wasted on talking out the characters’ choices. Virtually everyone in this setting acts on instinct, with minimal words, so the many threads of delicate tension running through the prison have to come across through action. That’s what makes this film different from most prison dramas: Mackenzie and Asser seemingly assume their viewers have watched plenty of other, similar stories, and can fill in for themselves why the block’s corrupt Governor Hayes (Sam Spruell) might hate and resent his newly promoted female boss (Sian Breckin). Or why Hayes and outside counselor Oliver (Rupert Friend), who runs a delicate but effective group-therapy program, are at each other’s throats. Or why the participants in the program, who protect and support each other, still frequently bait each other into screaming matches, testing each other’s fragile, newfound self-control. That level of trust in the audience gives the film a thrilling density, and a sense of a precision-engineered machine operating at its peak: Every moment feels charged and calculated. The script could be taught in classrooms, to illustrate both “Show, don’t tell” and narrative economy.

Given the film’s charged environment and perfect performances, its chilly look seems almost incidental. Cinematographer Michael McDonough gives the film the same bleak blue-and-gray look he gave Winter’s Bone, building a sense of a world almost without color—so that it’s all the more striking when Mackenzie catches Eric alone for a second in his cell with a brilliant orange light leaking through a makeshift curtain, or when Eric gets jumped in a shower (shades of Eastern Promises), and his pale white body sprawls amid industrial grey tiles. Mackenzie has made flashier films—Perfect Sense’s woozy, gorgeously sensual visuals were much stronger than its story—but he does occasionally assert himself with an off-kilter or low-angle shot, again disbursed minimally, and for striking impact.

Mostly, though, he keeps the complications between the characters, as Eric and Neville bounce off each other with a friction that changes in every scene, especially as Eric starts making friends among Oliver’s group, and Neville tries to sort through his jealousy, possessiveness, and alpha-male need for deference. O’Connell is riveting in his physical fearlessness and rabid energy, but Mendelsohn offers just as striking a performance, as he pauses in his conflicts with his son only long enough to navigate his conflicts with himself. These are complicated characters, presented in the most straightforward and simple way possible. The most tremendous thing about Starred Up is exactly how simple it keeps things, and what a richly nuanced story emerges in the process.