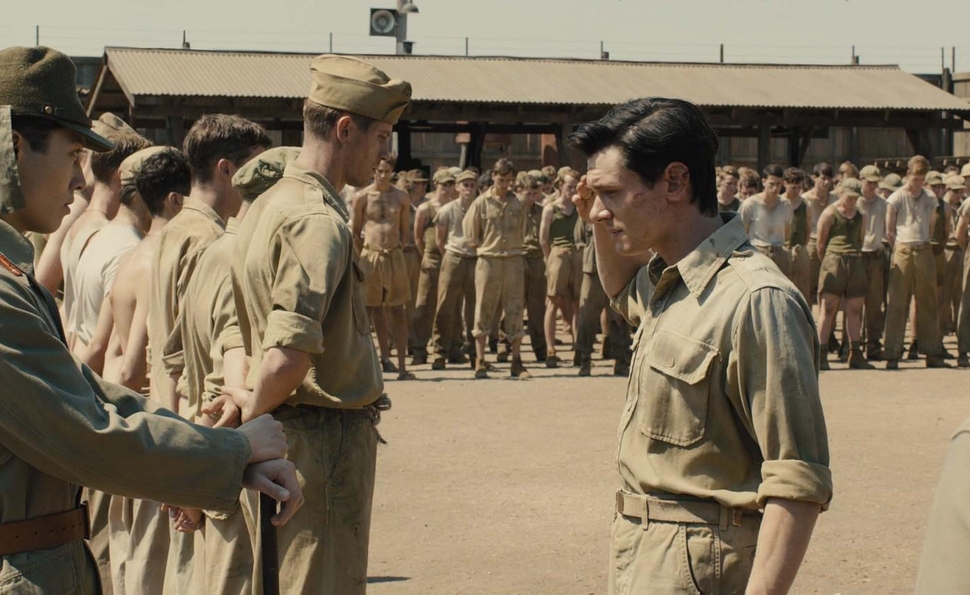 People in unrelenting, traumatic circumstances often use humor to relieve the monotony of pain. Failing that, they get angry. Or creative. They rely on faith, or altruism, or imagination to sustain them. The great stories about human endurance dig into these kinds of outlets, into the nature of the human instinct for survival, and the details of what lets one person soldier on where most might crumble. The middling ones, like Angelina Jolie’s serviceable, shiny, but dreary biopic Unbroken, miss the importance of why or even how survivors survived. In this case, the film is simply concerned with what its subject survived, as depicted in brutal, repetitive detail.

Jolie’s film adaptation of the life of Louis Zamperini, adapted from Laura Hillenbrand’s 2010 biography, starts with Zamperini as a belligerent kid in 1930s California, where his family’s Italian origins draw derision. Set upon by four mocking bullies, Zamperini won’t be cowed. They keep knocking him down, and he keeps coming up punching. In the manner of so many straight-line biographies, the scene stands as foreshadowing and character explication: Zamperini is scrappy and savage, doesn’t like being pushed around, and remains indomitable, regardless of the damage he sustains. But even as an angry kid, he’s a closed book to the audience. When his brother Pete tries to find a more constructive channel for Zamperini’s speed and energy—largely used for fleeing the cops after getting caught drinking purloined alcohol or peeking up women’s skirts under the bleachers—Zamperini resists, shouting, “I’m nothing! Let me be nothing!” Where did this vicious self-destruction come from in a child? Who is Zamperini, besides a scowl and a penchant for rule-breaking? That’s none of the film’s concern, as it zips from one historical signpost to the next.

In short order, and with more trudgingly literal just-the-facts reporting, Zamperini starts running in competitions, wins, breaks a record, heads to the 1936 Olympics in Berlin, and impresses people there. (Jolie leaves out the part where the real-life Zamperini earned the personal praise of Adolf Hitler.) Played as an adult by Jack O’Connell (Starred Up), Zamperini enlists in the Air Force and becomes a bombardier in the Pacific theater, where a rescue mission gone wrong dumps him in the middle of the ocean with two other survivors, Phil (Domhnall Gleeson) and Mac (Finn Wittrock). After finally emerging from that protracted hell, Zamperini passes through a series of Japanese POW camps, each one more organized and brutal than the last, especially once he catches the attention of a swaggering young commandant played by Japanese pop star Miyavi.

The first half of Unbroken passes in the spirit of a classic WWII story; beautifully shot by Roger Deakins, it’s the kind of prestige movie best classified as “handsomely mounted,” or “respectable,” rather than passionate, creative, or committed. The segment that starts with Zamperini’s Air Force career and ends with the escape from the life raft feels like the core of a grim but thrilling late-1940s adventure, the kind that helped Americans process the past decade as a series of tough, uplifting human-interest stories. Jolie stages impressive action scenes, from a dogfight between the Japanese and Zamperini’s lumbering bomber to a breathless crash-landing to a desperate escape in shark-filled waters. Once Zamperini and his starving buddies start yanking sharks bare-handed from the ocean for food, the story feels like a two-fisted macho fantasy, made all the more thrilling because it’s true.

But when the raft sequence ends, Zamperini emerges into a completely different hell, one that the film’s punishing 137-minute runtime turns into a weary slog. There’s no relief for Zamperini from the commander’s all-too-personal attentions, and no relief for viewers in terms of learning what’s going on in Zamperini’s head, and how he’s coping through beating after beating after beating. His suffering becomes a monotone droning executed at a high pitch, like watching the worst whipping in 12 Years A Slave for an hour straight. That film took breaks to observe how its protagonist was changed by his experiences, watching him at rest with his thoughts, or enjoying surprise pleasures, or giving in and singing the spirituals that comfort his fellow slaves. Unbroken just piles on the misery without tonal shift, any sense of rise and fall, or any interest in Zamperini’s inner life, beyond his catchphrase, “If you can take it, you can make it.” Jolie mounts him on his agony like Christ on the cross, then retreats to a respectful, alienating distance to watch, for what feels like an unbroken eternity.

Each of Unbroken’s many segments echoes past prestige pictures, sometimes unfortunately (it’s hard to watch Zamperini’s running-career montage without thinking of Forrest Gump) and sometimes awkwardly. (The raft segment recalls Life Of Pi without the preternatural beauty or the tiger.) But the internment-camp portion of the film suffers most from its similarity to David Lean’s 1957 Oscar-sweeper The Bridge On The River Kwai, which similarly tracked the contentious yet close relationship between a captured military Westerner and an officious Japanese commander. Kwai provides the strong sense of purpose and method that Unbroken lacks; Alec Guinness brings across a sense of duty, honor, and humor that informs all his character’s movements, while his opposite number, played by Sessue Hayakawa, reveals the frustration and obligation that drive him. O’Connell is a fine actor—the early segments of the film set him up as boyish and vulnerable, but with that same childhood streak of stubbornness—but the deeper the film dives into totting up the scars laid on Zamperini’s body, the less interested it is in how or whether his spirit is enduring.

The most baffling aspect of all this is the presence of Joel and Ethan Coen in the writing credits. Of all the people working in Hollywood today, they may well be the ones most focused on character, on building stories primarily out of how people think, and how that affects what they do. But the script (also credited to Richard LaGravenese and William Nicholson, both veterans of stately but inauthentic glossies ranging from Gladiator to Les Miserables to The Horse Whisperer to Water For Elephants) doesn’t have any sign of the Coens who like quirk and color.  A real Coens version of the movie might have taken an interest in the things that made Zamperini unique apart from his physical circumstances, or saved some time to look at the equally fascinating story of who he became after his war experiences. (The film merely tacks on a sweet but brief modern-day coda with footage of the real Zamperini, reminiscent of Schindler’s List.) But this version is just a naked chronicle of extensive abuses, lined up in a long and exhausting row. It’s handsome, and thrilling, but still more Unrelieved than Unbroken.