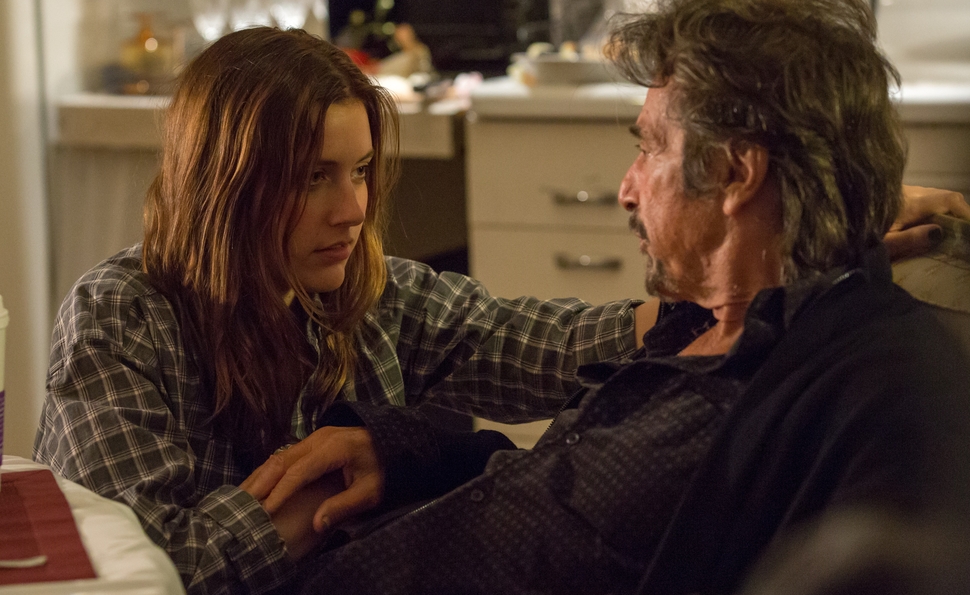 Where to begin with all the humbling experienced by those involved with The Humbling? Director Barry Levinson, who won an Oscar for 1988’s Rain Man, hasn’t made a widely acclaimed film since Wag The Dog, way back in 1997; his run of stinkers from 2000-2006 (An Everlasting Piece, Bandits, Envy, Man Of The Year) had many people, including Levinson himself, asking What Just Happened. Al Pacino, The Humbling’s star, has retained considerably more dignity, but the last movie he made that landed him in any kind of awards conversation was Donnie Brasco (also from 1997), and lately he’s been playing even more garish self-parodies than usual, in disasters like Stand Up Guys and Jack And Jill. What’s more, The Humbling is adapted from a novel, published in 2009, that prompted some of the worst reviews Philip Roth (now retired) received during the course of his entire long career. From the ashes of all this humility, however, rises a film that’s surprisingly, arrestingly vital—ragged, to be sure, but very much alive.

Pacino was reportedly the driving force behind the project, and it isn’t hard to understand his attraction to the lead role. He plays Simon Axler, a famous actor (in both movies and the theater, like Pacino) who’s experiencing a crisis of confidence, to the point where he deliberately falls face-first into the orchestra pit during a live performance, then attempts suicide. After a month in a psychiatric hospital, he retires to his home—which looks as if he just moved in yesterday, though he’s lived there for 14 years—and mostly wallows in self-pity. Then Pegeen (Greta Gerwig), the daughter of some old actor friends (Dianne Wiest and Dan Hedaya), arrives unexpectedly. Pegeen has been a lesbian for many years, but she nursed a crush on Simon as a little girl, and wastes no time in seducing him, jump-starting both his libido and his creative instincts. Meanwhile, Simon has to duck 1) his agent (Charles Grodin), who wants him to get back to work; 2) Pegeen’s angry ex (Kyra Sedgwick), who calls Simon day and night to warn him that Pegeen will destroy him; and 3) a genuinely crazy woman (Nina Arianda) from the asylum, who wants Simon to kill her husband—she claims he molested their daughter—and won’t take no for an answer.

Just from that synopsis, it’s easy to see why literary critics accused Roth of indulging a dirty-old-man fantasy. Onscreen, however, it doesn’t play as gross as it might sound, even though Gerwig, at 31, is even younger than Pegeen is in the novel (40). Gerwig isn’t playing her usual adorably flighty character here—Pegeen has razor-sharp edges, and she dominates the relationship so completely that it sometimes seems less like a fantasy than like an assault. (The movie cuts some of Roth’s more erotic passages, and turns another into a dream sequence.) And Gerwig has terrific chemistry with Pacino, who turns exhaustion into a weird sort of aphrodisiac. Plus, there’s so much random insanity swirling around Simon that the May-December stuff just seems like one more aspect of the real world intruding on his make-believe existence. Early in the film, after Simon takes the swan dive onstage, he asks a hospital nurse whether she believed his groan of pain, then tries to groan more convincingly. By the end, he’s committed to realism in a new way—one that coincidentally echoes the journey Michael Keaton’s character undergoes in Birdman.

As strong as the central performances are, however, it’s Levinson’s direction that gives The Humbling its freewheeling energy. Perhaps recognizing that he bottomed out some years ago, Levinson unexpectedly made a low-budget found-footage horror film, The Bay, a couple of years ago; this is a similarly shoestring production—shot quickly, for little money, and mostly in his own house, doubling for Simon’s. Screenwriters Buck Henry and Michal Zebede invented a shrink (Dylan Baker) for Simon to talk to via Skype, and Levinson (working again with editor Aaron Yanes) uses these sessions as a rhythmic device, often injecting them achronologically into the middle of scenes. The camera is restless and jittery when that suits the material, but Levinson can also lock it down in order to let Pacino, Wiest, and Hedaya do a hilarious comedy routine in a vet’s waiting room, underneath three enormous, ridiculous pet photos. For every element that doesn’t work—early scenes are sluggish; a subplot involving a transgender ex of Pegeen’s (Billy Porter) comes across as cartoonish; a climactic shouting match falls flat—there’s a moment that crackles with electricity and conviction. Humility sometimes leads to renewed effort. There’s plenty of it here.