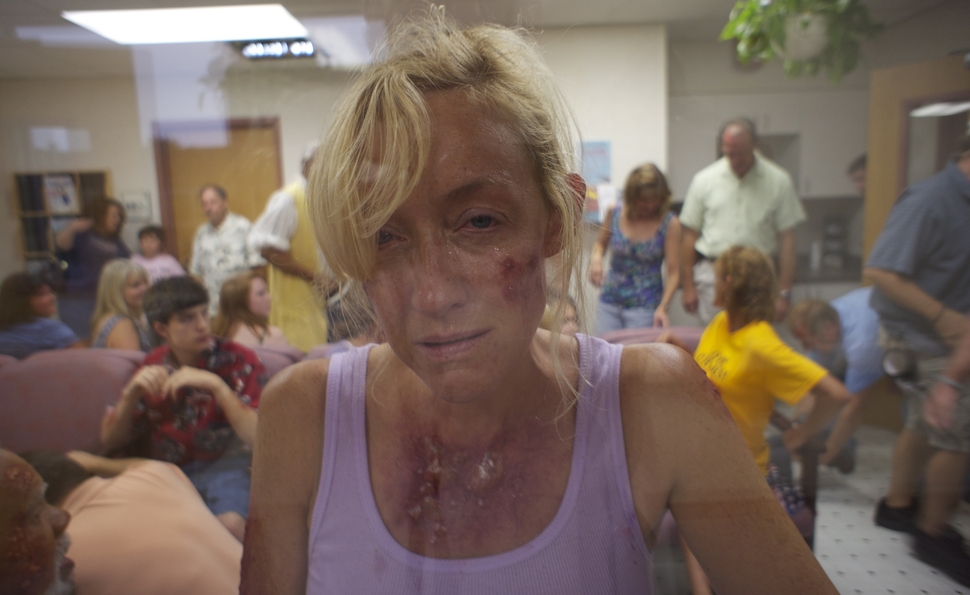 Rob Zombie, Eli Roth, Don Coscarelli, Ryuhei Kitamura, Barry Levinson. Which of these is not like the others?

When the lineup for the Midnight Madness section of the 2012 Toronto Film Festival was announced, there was something of a record scratch when Levinson’s name appeared on the docket. How did Levinson—an Academy Award-winner for Rain Man, an Emmy winner for Homicide: Life On The Street, once perched atop the Hollywood A-list—wind up making The Bay, a low-budget, found-footage eco-horror flick? Was this a sign of a director who had fallen on hard times, or an eclectic artist doing new things and trying to stay relevant in the digital era? Levinson had actually attempted horror before, with his dismal adaptation of Michael Crichton’s novel Sphere (“You have nothing to fear but Sphere itself,” we used to say at the time), but this was something different: scaled-down drastically, hitched to the wagon of Paranormal Activity mastermind Oren Peli, and following an unbroken streak of critical and commercial failures in the 21st century, including An Everlasting Piece, Bandits, Envy, Man Of The Year, and What Just Happened. This was apparently the man who was going to throw red meat to the ravaging horror mavens on night seven of Midnight Madness.

So does The Bay count as nadir, or a new beginning? Certainly not the former—it’s a clever, disgusting little movie, as I’ll explain shortly—and maybe not the latter, either. But it’s a good show of Levinson’s survival instincts, his ability to diversify and trend-hop while sneaking across some personal elements. There’s no place for Levinson in the Hollywood of today, not just because of his box-office flops, but also a more general resistance to the mid-budget dramas and comedies on which he made his name. So he’s learned to stick and move, dabbling a bit on television with HBO (for which he did the Jack Kevorkian biopic You Don’t Know Jack) and ESPN (for which he did the 30 For 30 doc The Band That Wouldn’t Die) and getting movies made outside the system. Levinson had the misfortune of starting his career with two of his best and most personal efforts, Diner and Tin Men, but with exceptions like Avalon and Homicide, he’s mostly been a nomad from his native Baltimore, where he once seemed well on his way to becoming the city’s second-most-beloved cinematic son. (First is John Waters, naturally.)

The Bay represents a sort of homecoming. While set in the fictional tourist town of Claridge, Maryland, that town is located on the Chesapeake Bay, which has been plagued by environmental abuses. (Levinson has claimed his film is roughly “80 percent accurate”; the other 20 percent seems owed to Jaws, Contagion, George Romero, and Creature From The Black Lagoon.) There’s no doubt Levinson has fond memories of the Chesapeake, and it’s apparent in the early scenes of The Bay, when families flood the coast on July Fourth for fireworks, a parade (with the lovely Miss Crustacean!), and buckets of blue crab with mallets and Old Bay. (The horror commences with mass vomiting at a crab-eating contest, in what may be the film’s most painful moment: the suggestion of an entire culture turning to rot.) It had been a while since Levinson told a Baltimore story, and this one finds him—in style, tone, and chronology—the furthest possible distance from the sweet nostalgia of Diner 30 years earlier.

Levinson amplifies the faux-realism by inserting actual news stories about mysterious, almost Biblical environmental catastrophes—dead fish, birds falling from the sky, etc.—before segueing into a more common found-footage scenario. Talking to us via Skype, in the hushed tones of a defiant journalist exposing sinister government forces, Donna Thompson (Kether Donohue), a cub reporter who was assigned to July 4th coverage, reveals digital footage of the mass tragedy that was confiscated, then released by a WikiLeaks-type organization. So through Skype, smartphone footage, surveillance and video cameras, and Donna’s own video blog, among other sources, she (and Levinson) piece together the full, untold, redacted story of an eco-disaster and its cover-up. 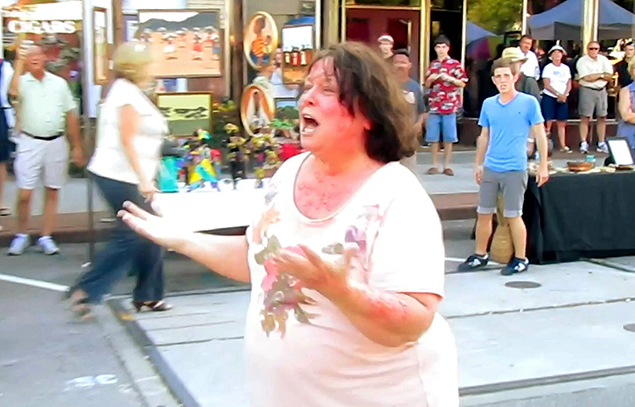 I feel the basic premise of a movie should almost always be accepted, no matter how outrageous; it’s how that premise is realized that ultimately counts. So when The Bay suggests that the powers-that-be were able to bottle up any and all evidence of an event that killed 700 people, such conspiratorial gibberish must be swallowed like a glass full of refreshing, desalinated Claridge drinking water. Levinson and his screenwriter, Michael Wallach, ask viewers to accept this whopping implausibility in order to get to a series of smaller, more plausible ones about the cozy relationship between local officials and polluters, the relaxation of environmental standards, and the burial of any reports that might keep the money from flowing into a town like Claridge. All “something under the water” horror premises owe something to Jaws, but Levinson and Wallach also take cues from its portrait of a coastal town that won’t let talk of monsters spoil tourist season.

The Bay is not Levinson’s reinvention as a master of horror, and its attempts to manufacture shocks from the spread of parasitic isopods are often the film’s weakest moments. It’s really a grosser Contagion, a horror film mainly because the parasites make such an awful mess of the human body. Those with small parasites can expect the slow, grueling rot of infection, and those with large parasites can expect to be eaten alive from inside or out, depending on whether full-sized isopods are attacking them like piranha, or distending their tummies like the beastie from Alien. Levinson isn’t particularly expert in building atmosphere—and his found-footage conceit, with its multiple angles, doesn’t allow much of it anyway—but he does the job of a good eco-horror director by making the common seem ghastly. You drink a glass of water, you die. Simple as that. Terror in the here and now.

Where The Bay excels is in the construction of footage from multiple sources and multiple formats, rather than the usual found-footage tack of one or more first-person cameras. It’s a convergence of all things digital, from the multiple smartphones that catch the crab-eating-contest disaster to the muddy Skype exchanges between the hospital and the CDC to the dashboard camera mounted on the front of a police cruiser. This is how disasters are revealed to us now: From the many angles of obsessive self-documentation, security mounts in every storefront, and living at a time when a surveillance state is easy and affordable. And though the repression of all this footage is absurd and impossible to believe, the film captures the way technology can both oppress and democratize: Big Brother may be watching us, but whatever it gets has to pass through the giant sieve called the Internet.

Despite the Midnight Madness lead-in and respectable distribution, The Bay made less than $1,000 per screen on 23 screens its opening weekend, and sank into streaming waters that are even murkier than the Chesapeake. It doesn’t seem likely to revive Levinson’s fortunes or herald the coming of a new genre maestro, but it isn’t a footnote in his filmography, either. Like the mix-and-match footage that composes it, The Bay finds Levinson trying to do something personal while staying atop the digital trends that are attracting young audiences and changing the way movies are made. This is probably not the crossroads where the 70-year-old director expected to be standing at this point in his career, but sometimes inspiration and desperation go hand in hand.