This weekend, a lot of people exited their abodes to see Home 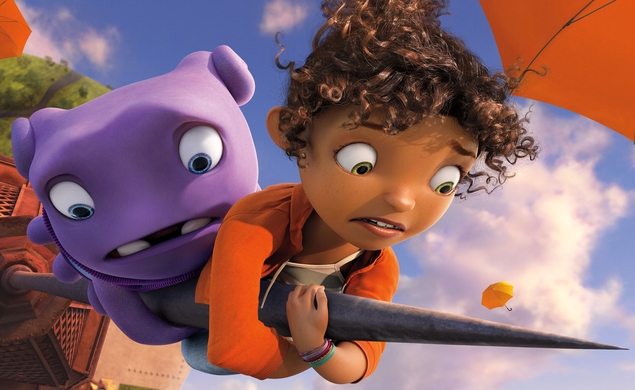 The unholy trinity foretold in the stars—Rihanna, Steve Martin, and Jim Parsons—brought Home home this weekend, just as the mighty prophet said they would. They brought home the bacon. They drove home the point. I think I’m done; not totally sure. But seriously, Dreamworks has a surprise hit on its hands—the cuddly-alien-meets-a-skeptical-human buddy comedy brought in $54 million domestically and $101.5 million worldwide.

Home’s massive opening puts it ahead of the likes of Kung Fu Panda 2 ($47.7 million), How To Train Your Dragon ($43.7 million), How To Train Your Dragon 2 ($49.5 million), Madagascar ($47.2 million), and Mr. Peabody And Sherman ($32.2 million), marking a big victory for the studio. It also marks a victory for, I don’t know, humanity in general? This is an animated movie centering on a young black girl, and it made a shitload of money. Even real live men showed up to see it. Can we stop this “female-centric movies don’t bring in cash” nonsense now, Hollywood? Or do I have to keep asking you that question every week? Either way. Your call.

In the No. 2 slot this weekend, we have, one might argue, the diametric opposite of Home: Get Hard, the Will Ferrell/Kevin Hart joint that pretends to subvert racial stereotypes but is actually just kind of racist. Because we inhabit a bleak universe where star power trumps actual content and cuddly aliens exist only in our imaginations, Get Hard fared pretty well at the box office, pulling in $34.6 million. This makes it Hart’s second-biggest opening, behind Ride Along ($41.5 million), and Ferrell’s fifth-biggest, behind The Lego Movie ($69 million), Talladega Nights ($47 million), Megamind ($46 million), and The Other Guys ($35.5 million). Now that we’re totally informed about this movie, let’s move on.

On the indie front, Noah Baumbach’s While We’re Young opened on four screens, pulling in $242,000 and this weekend’s No. 1 per-screen-average of $60,500. Pretty good for some old people! Serena, a career decision that Jennifer Lawrence must regret every single day of her life, opened on 60 screens, grossing $110,000 and confounding the world at large in the process. (“What’s the point of this movie?” wondered our own Scott Tobias). The Salt Of The Earth opened on four screens for a total of $44,900, White God opened on two screens for a $16,000 total, and Man From Reno made $12,600 on two screens of its own. Breakout hit It Follows opened on an additional 1,800 screens and crept ominously from No. 19 to No. 5 with a $4 million total. Boo! Just kidding, I’m not a ghost.

The rest of the box office rounds up in a fairly predictable fashion. Insurgent plodded dully from 1 to 3, grossing $22.1 million; Cinderella fell, weeping, into the strong arms of the No. 4 spot with $17.5 million; Kingsman: The Secret Service had its ass kicked by It Follows, which drop-kicked it into the No. 6 spot with $3.1 million; Run All Night had to stop running, even though it was still night, and stopped short at No. 7 with $2.2 million; The Best Exotic Marigold Hotel creaked (am I referring to old hotel floors or bones? hard to say) its way to No. 8 with $2.2 million; Do You Believe? asked people if it believed and a lot of people said “nah,” so it fell from 6 to 9 and made only $2.2 million; and lastly, The Gunman fired several blanks and collapsed, falling from No. 4 to No. 10 with $2 million. Make sure to take some time today to pour one out for your boy Sean Penn.