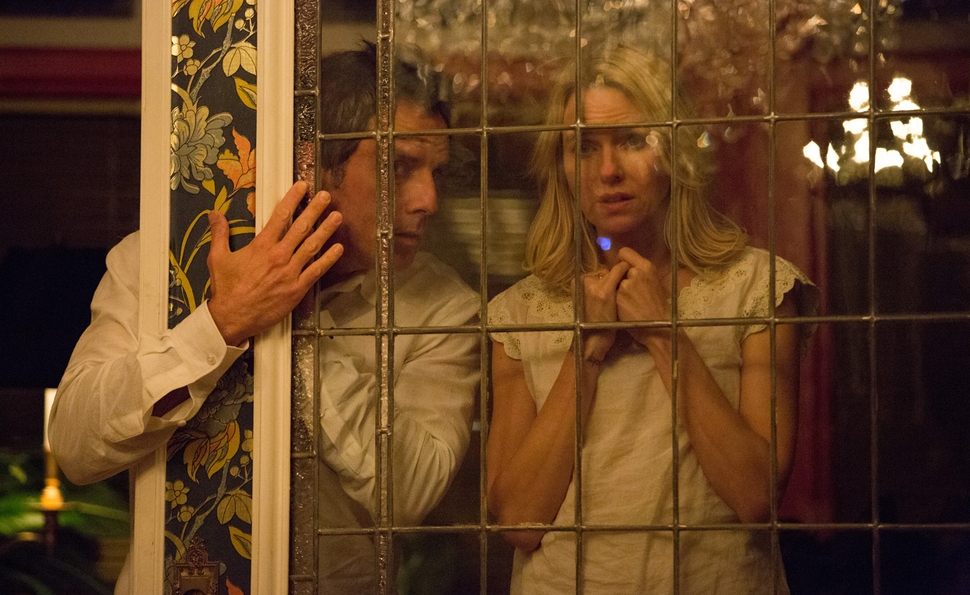 “I remember when this song was just bad,” Josh (Ben Stiller) tells Jamie (Adam Driver) when the latter plays Survivor’s Rocky III power anthem “Eye Of The Tiger” to pump the former up before a big meeting. Josh sounds relieved to discover what had once been a guilty pleasure for his generation has now been upgraded to pleasure by those coming up behind him. All the detritus of his youth—old commercial jingles, videotapes of horror movies, Lionel Richie—lives on in the strategically cluttered loft Jamie shares with his wife Darby (Amanda Seyfried), while the apartment where Josh lives with his wife Cornelia (Naomi Watts) looks like it hasn’t seen clutter since takeout menus went digital. In time, Josh will discover that their habit of appropriating whatever appeals to them isn’t always so charming, but at first it seems revivifying. Maybe those youthful enthusiasms were the real stuff of life. Maybe this grown-up period that’s been giving him so much trouble is just a passing phase.

Josh and Jamie are documentary filmmakers at different stages of their careers. Jamie’s just starting out, doing quirky projects featuring his friends. Josh has stalled. He’s labored for years over an increasingly nebulous project about power and America, most of it tied to theories of an elderly scholar (Peter Yarrow) who even Josh admits is kind of boring. Josh and Cornelia strike up a friendship with Jamie and Darby after the younger couple sits in on one of Josh’s classes, drawn by Jamie’s admiration for the last film Josh managed to finish (which Jamie had to acquire on eBay). What follows, in writer-director Noah Baumbach’s latest, is a comedy of cross-generational exchange that’s smart, lively, and beautifully observed—until it sours in a final act that undoes much of what precedes it.

It takes a while to get to that point, however, and there’s much to enjoy along the way. Childless in their 40s, Josh and Cornelia feel out of place among their friends, most of whom have kids and have drifted away to join other parents, when they socialize at all. Jamie and Darby drag them out of their cloistered world and into a wider, funkier Brooklyn, a place of “street beach” parties, urban exploration, and porkpie hats. Jamie even gets Josh working again, this time on a project with a possible end point: A documentary that follows Jamie as he reconnects with old friends who contact him on Facebook. When one turns out to be the survivor of an especially traumatic tour of duty in Afghanistan, both realize they’ve struck documentary gold.

That gives While We’re Young its plot, but it’s the many scenes of the foursome simply interacting that give it its shape and color. Baumbach has a keen eye for the effects technology has had on the unsettled edges of modern etiquette. Characters reach for their phones the first moment politeness will allow it, and rely on the omnipresence of the Internet to look up whatever their memories won’t summon up instantaneously. He’s smart, too, about the way age can narrow both experience and emotions. “Before we met the only two feelings I had left were ‘wistful’ and ‘disdainful,’” Josh tells Jamie. If While We’re Young makes him and Cornelia look ridiculous in their attempts to recapture a bit of the youth they didn’t realize had slipped away, it also makes clear why they might be desperate to do so. That Stiller and Watts never wink, even in a long scene involving a vomitous psychedelic ritual, enriches the pathos beneath it all.

Since his 1995 debut Kicking And Screaming, Baumbach has made arrested development a recurring theme. His films have never sided with those stuck in the past, and While We’re Young is ultimately no exception, even if it spends a good stretch demonstrating both the appeal and therapeutic value of the relationship between the central foursome. James Murphy provides the score—between bursts of Vivaldi and well-chosen pop songs—and the film initially plays like a cinematic version of LCD Soundsystem’s “Losing My Edge,” complete with an up-and-coming bunch of kids who are “really, really nice.” But it turns into what Bob Dylan once called a “finger-pointing song,” and while Driver and Seyfried are both quite good, there’s nothing specific enough about their characters to avoid making the film feel like a blanket condemnation of a whole generation and their new ways of doing things. Late in the movie, Josh delivers a rant with a parenthetical that he doesn’t care if what he’s saying makes him feel like an old man. It plays like a meta moment.

All of this leads to a disappointing, simplistic climax, but not a ruinous one, especially since it seems so at odds with the more complex scenes the precede it. Charles Grodin, always welcome, plays Cornelia’s father. A successful documentary filmmaker of the cinema verité generation, he and Josh have a fractious relationship that seems as rooted in a tussle between generational sensibilities as any personal disagreement. Their scenes together offer glimpses of themes While We’re Young never quite gets around to exploring, even though they still inform the best parts of the film. Each generation figures it out and tries to impose their vision of how things should be on the world, only to forget that feeling the first time they discover that those next in line are willing, even eager, to wipe it all away and start again. Those who cling too hard risk getting erased as well.