Casino is haunted by gangster movies past 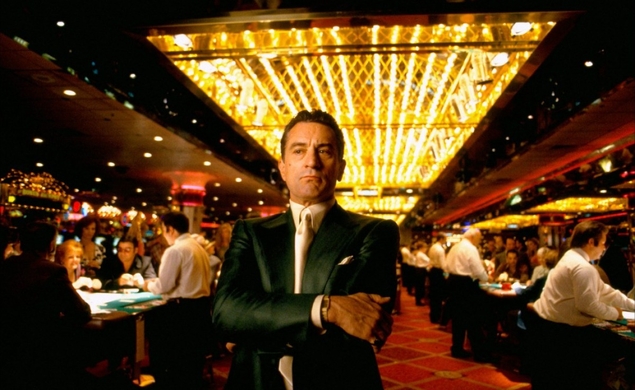 As a motion picture, Martin Scorsese’s 1995 classic Casino suffers from a giant drawback: It isn’t Goodfellas. That’s no fatal flaw, as only Goodfellas is Goodfellas, but Casino is as close to being Goodfellas as any film could possibly be that isn’t actually Goodfellas. Call it a follow-up, a semi-sequel, a companion film, or what have you—Casino is unmistakably built from the same blueprint as the Scorsese mob movie that changed, and supercharged, the language of cinema.

Casino shares Goodfellas’ director, screenwriters (Scorsese and Nicholas Pileggi, who also wrote the novel the film is based on), leads (Robert De Niro and Joe Pesci), wall-to-wall narration, slightly too on-the-nose musical cues, and mob-world setting. They also both share arcs that take their characters from giddy highs to coked-out lows, and protagonists who work exquisitely with the Italian mob, but can never be truly accepted because of ethnicity.

In Goodfellas, that was Irishman Henry Hill (Ray Liotta, in the role that led him to become a tequila spokesman). In Casino, it’s “Ace” Rothstein, who is Jewish, or as his friends more commonly refer to him, “that fucking Jew” and “that goddamned Jew.” (And those are his friends. Imagine what his enemies must call him.)

Casino is a lesser film than Goodfellas, in part because Rothstein makes an awfully passive protagonist. The character he reminded me of most wasn’t Henry Hill—it’s Monroe Stahr, the Irving Thalberg-like character De Niro played in the flawed but fascinating adaptation of F. Scott Fitzgerald’s The Last Tycoon. Both men are inveterate fixers, pragmatists who know all the angles and are brilliant at playing them, but seem to derive very little pleasure from their own genius. They’re so obsessed with getting things done for their bosses that they can’t enjoy the fruits of their tireless labor. And when Rothstein sets his sights on someone he thinks can give him pleasure and make him whole, in the form of sharp-witted hustler Ginger McKenna (Sharon Stone), it all but proves his undoing.

Goodfellas took us to gangster heaven before descending into the pits of hell, but Casino presents its gangster universe as more shabby and shopworn, less the domain of gorgeous killers in sharp suits, and more an arena for sad old men operating in back rooms in the Midwest, operating elaborate skimming schemes that quietly bleed casinos dry while offering at least the illusion of non-interference.

This is the world Rothstein rules as the country’s preeminent bookie, a genius at figuring out the odds not just of sports and gambling, but just about everything. He’s placed in charge of a casino called the Tangiers as a front for the mob, and soon his life is complicated at every turn—not just by Ginger’s live-wire unpredictability, but also by the psychotic, unrelenting violence of his best friend Nicky Santoro, whom a perfectly cast Joe Pesci plays as a man never more than a few seconds away from beating someone to death in a fit of volcanic rage. I hope that when Pesci dies, his Oscar reel consists solely of him beating people to death, because that’s how he will invariably be remembered: as a tiny little Italian man eternally kicking, punching, and stabbing people into the hereafter. He’s a rampaging, unhinged id to Rothstein’s icy ego, and for a while, they make a good team—the cool-blooded frontman and the hot-blooded enforcer.

Like Goodfellas, Casino offers wall-to-wall narration that comes close to redeeming the oft-maligned form. The narration provides a sense that we’re exploring the secret history of Las Vegas in the 1970s, and how the mob transformed casinos into their own private piggy banks with the help of civilians who could always be bought, and generally at a discount. In the hands of a lesser filmmaker, this narration might come off as endless exposition, but Scorsese has a genius for making exposition seem less like a clumsy unpacking of relevant information than a form of violent folklore that’s entertaining in its own right. Casino runs three hours, in part because Scorsese wants to stuff as much reality-derived gangster lore as he can into one sleek epic of a movie.

Beyond not being Goodfellas, Casino’s big flaw is Rothstein the character, not the actor. He lacks the hot-blooded magnetism of Ray Liotta’s Henry Hill and is overshadowed not just by the perpetually explosive Pesci, essentially reprising his role from Goodfellas, but also by Sharon Stone in a career-best performance. Unlike Rothstein, Ginger is nothing but sloppy yearning and naked emotion. As their never-solid marriage crumbles spectacularly, Rothstein and Ginger’s scenes together in the second half of Casino hit some of the shrill registers and shouty expressiveness of a John Cassavetes film.

Despite its flaws, Casino is entertaining throughout, a smooth synthesis of music, period color (the clothing budget was reportedly $1 million, with most of that going to De Niro’s outfits rather than Stone’s), violence, and blood-splattered sociology. It’s the perfect film to catch halfway through on cable, because it offers a world to get lost in, even though it’s haunted by Scorsese and Pileggi’s previous exploration of the gangster psyche.

Scorsese is well-represented in the IMDB Top 250. His films aren’t generally blockbusters (he’s no Steven Spielberg), and they aren’t always even profitable, but they linger in the culture and pick up cults even when they’re initially dismissed as lesser versions of previous triumphs. Not surprisingly, Casino ranks much lower in the Internet Movie Database’s rankings than Goodfellas. Even on the IMDB top 250, Casino gets plenty of respect, but is nevertheless doomed to live in Goodfellas’ outsized shadow.