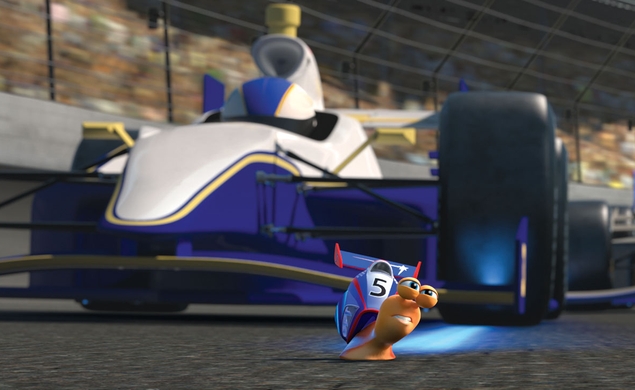 Each day this week, a staff member of The Dissolve will pick a 2013 movie they liked more than the critical community at large. Today, Genevieve Koski recommends Turbo, the DreamWorks Animation film about a snail who dreams of becoming a racing champion. Turbo received a 67 percent on Rotten Tomatoes and a 58 on Metacritic.

Matt Singer: Genevieve, back in July you wrote The Dissolve’s review of Turbo and you gave it four stars. How would you rate the movie now? Has your opinion of it changed in any way?

Genevieve Koski: My opinion of it hasn’t really changed, though looking back, it was probably more of a 3.5-star review, and that’s probably the rating I’d give it today: It’s good-to-occasionally-great, which pretty much sums up the year as a whole in mainstream animation. Turbo got pretty heavily dinged when it came out—including by me, to an extent—for its fairly standard follow-your-dreams underdog sports story, which in the broad strokes looks a lot like an attempt to mash up Ratatouille and Cars. And, okay, maybe it is, but it’s not like animation in 2013 was defined by exceptionally original stories, what with Monsters University, Despicable Me 2, Cloudy With A Chance Of Meatballs 2, and even the non-sequel Frozen, which shares a lot of its DNA with Tangled.

Focusing too much on Turbo’s structure, which is admittedly very standard, overlooks how damn weird it is in both its execution and comedic details. It’s a fantastical story set in a blue-collar world of asphalt, strip malls, billboards, and Formula One racing, and that disconnect created, for me anyway, an appealing quirkiness that stuck with me a lot more than the preordained victory of its titular speed-obsessed snail.

I’ll also admit to being pretty dazzled by Turbo’s use of 3-D, which was the most visceral experience I had with the technology this year outside of Gravity. Racing scenes just lend themselves well to the form, and when you add in the sense of scale—Turbo the snail is so tiny that everything around him becomes bigger, faster, and more imposing—it creates a really immersive, exciting experience. I wish more people had seen Turbo in the theater, because that element of the film is lost in home viewing.

Matt: You mentioned a bunch of other 2013 animated movies. Where would you rank Turbo on that list?

Genevieve: Man, that’s hard, because both Monsters University and Frozen had a number of scenes I absolutely loved—and so did The Wind Rises, though I have a hard time putting that in the same class as the other films we’re talking about—but ultimately, neither film worked that well for me as a whole. Whereas I enjoyed Turbo from beginning to end, but nothing in it matched the high of Frozen’s “Let It Go” sequence, or the final act of Monsters University. So I guess I’d place it on the same tier as those two, which I suppose are my default favorite animated films of 2013, though that’s kind of relative in that I don’t think this was a very strong year for the medium overall, and there’s a lot I didn’t get to see. (I’ve heard good things about The Croods, which seems like an original concept at least. As does Free Birds, though I’ve heard… less-good things about that one.) Judging by the gulf between the critical and popular reception of those two films and Turbo, though, I might be alone in that.

Matt: Your defense of Turbo reminds me a little of Keith’s defense of The Lone Ranger—namely that this seemingly very formulaic movie has some surprisingly strange touches and rough edges. Do you think these are two anomalies amid a sea of Hollywood garbage, or have this year’s big movies generally been more interesting than we tend to give them credit for?

Genevieve: That’s an interesting observation, and something I hadn’t thought of. I didn’t see The Lone Ranger, but having read Keith’s defense of it, I like the connection.

Honestly, “weirdness” is so subjective, it’s hard to say whether it’s an anomaly or a growing trend, especially when you’re talking about humor, which is where a lot of Turbo’s weirdness lay for me. (Not for nothin’, but Turbo was co-written by Rob Siegel, formerly editor-in-chief of The Onion, not to mention the writer of another, markedly different sports-underdog tale, The Wrestler.) And any such weirdness tends to seem even weirder in the context of a kids’ movie. For example, Turbo has a recurring gag where a crow swoops out of nowhere to carry off some hapless snail, never to be seen again, which is pretty dark for a film aimed at grade-schoolers.

I do think big Hollywood movies tend to invite broader reactions than smaller films, and that strange or personal touches the filmmakers try to squeeze in among the studio mandates can get overlooked in favor of bemoaning the uninspired sameness and mediocrity that plagues blockbusters, or whatever it is we’re bemoaning this month. That seems to be what happened with The Lone Ranger, and I think it’s definitely the case with Turbo, which on the surface almost looks like a parody of kiddie-movie trends.

Not to be too “every snowflake is special” about it, but I think any movie has the potential to find moments of greatness within even the most uninspired framework. I’m not saying Turbo’s framework is uninspired—in fact, the idea of a tiny mollusk racing in the Indy 500, in the real world, not a fantasy one, is pretty insane once you parse it. But there was a certain, shall we say, market-tested quality to how it was presented that doesn’t quite line up with what made it onscreen.

Matt: I missed Turbo, but you’re definitely piquing my interest with stories of mollusks racing in the actual, real-world Indy 500. Your description is also making me wonder: Despite its status as a kids movie, would Turbo be enhanced by viewing it under the influence of certain anonymous but potentially illicit substances? Could it have a second life as a midnight movie?

Genevieve: Why Matt, I haven’t the foggiest idea to what you may be referring, but if I did, and if I were the type of person to indulge just an experience, I’d probably say: Kind of! Not that I’d know from personal experience or anything, but a second viewing of this film in an altered state might highlight the absurdity of, say, Michael Peña’s character Tito being convinced that competitive snail-racing is they key to saving his brother’s struggling taco stand. It might also make silly jokes like “White Shadooowwww” between two and five times more hilarious. And it might give the you-are-there racing sequences an extra shot of “Whooaaaa…”

However, I don’t want to oversell this movie as the sort of surreal quirk-fest that might engender a cult following. There’s a lot about it that’s conventional and very family-friendly, and little of the so-bad-it’s-goodness that also might attract such an audience. (With the possible exception of Ken Jeong’s voice performance as a female Korean nail-salon owner, which, yikes.) But I do think it can be enjoyed by adults, sober or otherwise, as long as they’re open to the idea that family films can be enjoyable whether they have families. I saw Turbo at a 10 a.m. Saturday screening in a theater packed with noisy, squirmy children, which is pretty much my nightmare scenario, and I still enjoyed the film a great deal. So if I can enjoy it that way, I see no reason this theoretical reprobate of yours couldn’t enjoy it as well.

Matt: Good to know! (I was asking for a friend, obviously.) Do you have any opinion about DreamWorks Animation in general? People write these long analyses of Pixar, but there seems to be a lot less attention paid to DWA, even though they’re even more prolific and sometimes just as creatively successful. Do they deserve more respect and consideration than they get?

Genevieve: I think Dreamworks Animation does tend to get short shrift among the major American animation studios, though its overall hit-to-miss ratio keeps it from playing in the same league as Pixar or even Disney, whose storied history tends to absolve its frequent missteps. DreamWorks has released more good films over the years than its reputation tends to suggest, but for every Antz, Chicken Run, or How To Train Your Dragon, there’s a Shark Tale, Bee Movie, or Not Another Damn Shrek Movie Dear God No dragging down its average. (Though after the triumph of How To Train Your Dragon, and the diminished returns of Pixar’s sequels to Cars and Monsters Inc., the balance might be tipping a little.)

I think it boils down to a vague perception that where Pixar favors whimsy and sentiment, and Disney favors tradition and myth, DreamWorks goes for the wacky and in-your-face; that it’s the Poochie of feature animation, if you will. Turbo’s logline of “Speed-obsessed snail enters the Indy 500 because VROOOOM” does project a certain calculated wackiness that I think may have played into that perception for some.

Matt: All right, let’s wrap things up with the flip side of this conversation. Turbo was a movie you liked more than a lot of other critics. Is there a 2013 movie other critics liked that you weren’t crazy about?

Genevieve: While I didn’t hate The Spectacular Now, I was much less enamored of it than most. (I gave it three stars on Letterboxd, if that helps.) I liked its sense of place and time, and thought it was well-acted, but I just could not get behind its loathsome protagonist and central romance, which made me actively angry at several points. I initially felt the same way about (500) Days Of Summer, which was written by the same guys, but that film won me over in the end, whereas Spectacular Now left me actively annoyed by its main character’s supposed revelation. I’ve known too many dudes like Sutter to buy his line of bullshit, or the film’s.

Turbo is now available on DVD and Blu-ray, and for rental and purchase on digital and on demand services. Here’s its trailer:

Previously recommended:
-Noel Murray on Escape From Tomorrow
-Keith Phipps on The Lone Ranger
-Nathan Rabin on The Bling Ring