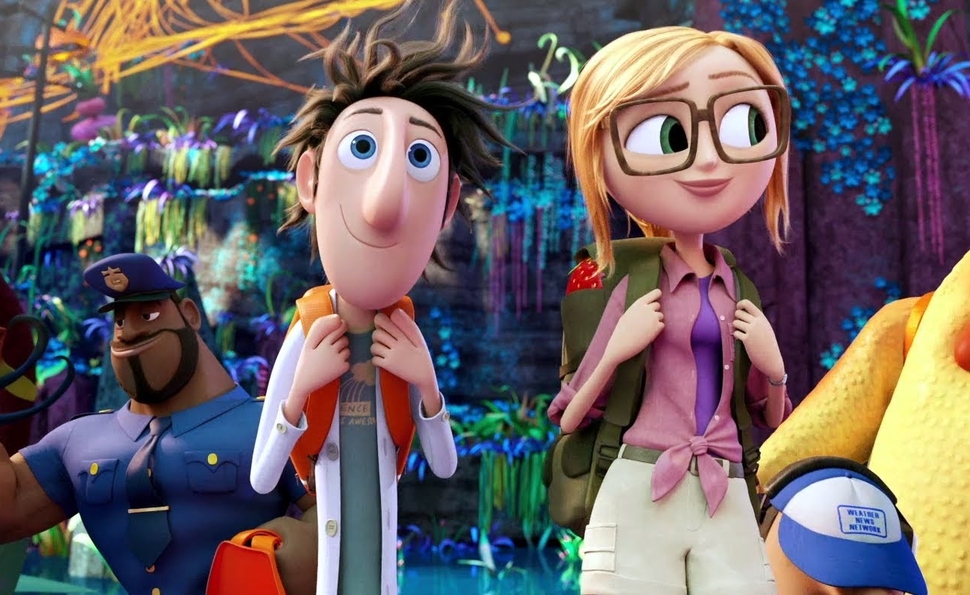 Cloudy With A Chance Of Meatballs 2

A cautionary tale about consumerism and the trouble of living in a world of overabundance, Cloudy With A Chance Of Meatballs felt a little out of touch with the times when it appeared just one year into the fresh economic crisis of 2009. A loose adaptation of Judi and Ron Barrett’s venerable children’s book, it became a sizable hit anyway, no doubt in part because kids don’t need timely metaphors in order to enjoy a movie. Co-written and co-directed by first-time feature directors Phil Lord and Chris Miller, Cloudy With A Chance Of Meatballs offered plenty to enjoy. The visuals are simple and appealing. The gags are clever—like a monkey named Steve, whose computer-assisted ability to speak (with the voice of Neil Patrick Harris) only revealed he was mostly interested in eating. And the emotional elements are nicely brought to life by a voice cast that includes Bill Hader, James Caan, and Anna Faris.

Nothing about the first film cried out for a sequel, but Cloudy With A Chance Of Meatballs 2 works anyway by providing more of the same—and then even more. The sequel picks up mere moments after the end of the first movie, with the island of Swallow Falls still not sure what to do about all the chaos caused by its citizens’ abuse of its FLDSMDFR, a device created by budding inventor Flint Lockwood (Hader) that’s capable of creating food out of water. Arriving to sort out the chaos: the forces of Live Corp, an enterprise headed by Flint’s inventor idol, Chester V (Will Forte). After relocating Swallow Falls’ citizens, Chester puts Flint to work, holding out the possibility he might rise within the ranks of Live Corp to became an elite inventor himself.

But things aren’t as they seem, either at Live Corp (read that first word backward) or at Swallow Falls, as Flint discovers when he’s sent there by his new bosses to address an apparent threat. Traveling with friends and family in tow—the best supporting characters from the first film, in other words—Flint discovers his former home has been overrun by animal/food hybrids created by his still-functioning/still-malfunctioning FLDSMDFR. Cue a seemingly endless succession of pun-friendly creations with names like tacodiles, shrimpanzees, flamangoes, and so on, all of which trouble Flint and plunge the company deeper into the island. But as the film offers food-friendly riffs on King Kong, Jurassic Park, and other lost-world movies, they start to recognize that the creatures might need protecting.

Lord and Miller, who followed the first Cloudy by directing the winning 21 Jump Street, got story credit for this sequel, with the team of John Francis Daley, Jonathan Goldstein, and Erica Rivinoja taking over script duties, and Cody Cameron and Kris Pearn stepping into the directors’ chairs. In some respects, the film seems perfunctory. There’s nothing as resonant here as the relationship between Flint and his father (Caan) in the first film, and many of the supporting characters are simply along for the ride. Yet for most of Cloudy 2, that doesn’t matter. The film retains much of what worked about the first film, and it brings a similarly smart, patient, visually striking approach to the gags. In one scene, Flint and his father have an earnest conversation in the foreground while Steve, unnoticed, experiences some frantic drama in the background. In another, Flint’s frustrated girlfriend Sam (Faris) turns to leave in a huff, then finds her retreat slowed by a river of syrup as the camera lingers, hilariously, on the image of her failing to make much progress in walking away. Like its predecessor, it’s a kids’ film that seems just as likely to appeal to grown-ups, because it doesn’t pander to either crowd: There are only a few pop-culture references, and just two poop jokes, both of them pretty funny. After all, what’s the point of creating an anthropomorphized strawberry if not to make it drop some strawberry jam?

GoWatchIt: Buy. Rent. Stream Cloudy With A Chance Of Meatballs 2