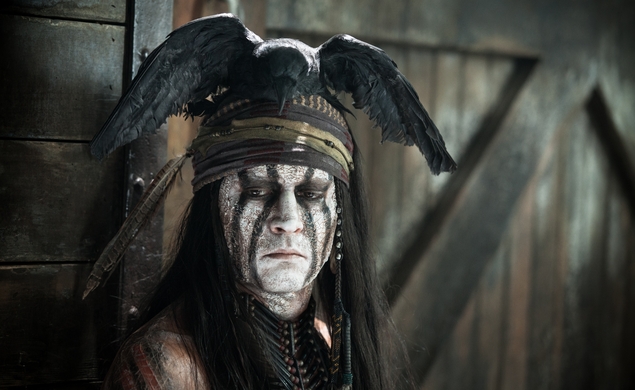 Each day this week, a staff member of The Dissolve will pick a movie from 2013 they liked more than the critical community at large. Today, Keith Phipps recommends The Lone Ranger, the failed blockbuster adaptation of the classic radio and television series starring Johnny Depp and Armie Hammer. The Lone Ranger received a 31 percent on Rotten Tomatoes and a 37 on Metacritic.

Matt Singer: Scott Tobias wrote The Dissolve’s review of The Lone Ranger, and he gave the film two stars. Keith, where would you rate it on The Dissolve’s five-star scale?

Keith Phipps: I’m not going to go crazy here. The film has its share of problems but it’s also got some pretty terrific stuff in it, and I ultimately ended up enjoying it. I’d love to go out on a limb and say it’s an unheralded masterpiece, but it’s not. But, three stars? I have no problem giving it that.

Matt: What in particular did you admire about it?

Keith: A few things stand out. For one, it’s a reminder at how good director Gore Verbinski is at big setpieces. Two scenes involving trains—one toward the beginning and one at the climax—play great, the latter turning into an extended homage to The General (allowing Johnny Depp to again pay tribute to Buster Keaton). If you can get past the fact that he’s a white man playing a Native American—and that’s not a small stumbling block—Depp delivers yet another deeply eccentric performance. And while I wouldn’t say it’s a film of deeply sophisticated politics, it casts a jaundiced eye at the United States’ conquest of the West. The film’s staunchest defender, Matt Zoller Seitz, accurately describes its Lone Ranger (Armie Hammer, who got unfairly drubbed for a fun performance) as “serving corrupt masters without knowing it.” And, siginficantly, it’s an aged Tonto trying to set the record straight who does the telling, even if there’s no one but a small child doing the listening.

Matt: Where do you stand on Verbinski in general? Are you a fan?

Keith: Sometimes. I like more of his films than I dislike. Both The Mexican and The Weather Man are memorable, even if they don’t really go anywhere. I think his remake of The Ring is really strong—better than the original, as we noted in a recent podcast. I greatly enjoyed the first Pirates Of The Caribbean movie, which has no reason to be as good as it is, but the second one annoyed me so deeply I checked out of the rest of the series. Rango, on the other hand, is a deeply inventive and weird movie, and a lot of fun to boot. So, a fan? Yes, question mark? What holds me back is that, despite seeing all those Gore Verbinski movies, I don’t have the strongest sense of who Gore Verbinski is. He’s director of note, obviously, but also kind of a mystery.

Matt: When the film came out and promptly bombed, Depp, Hammer, and producer Jerry Bruckheimer all blamed critics for its failure, claiming their reviews had been written months before the film was released, and were based more on the stories about the production’s budget overruns than the film itself. Do you think there’s any truth to their claims?

Keith: That was deeply annoying. And it felt like a calculated strategy for all of them to start addressing that all at once during the U.K. press tour, the subtext being, “Hey, you’re all more sophisticated than Americans, right? Then embrace this movie.” It’s cynical, because they all know the difference between entertainment reporters—who eat up stories about budget overruns and production shutdowns and such—and critics—who are there to write about the film itself.

The Lone Ranger certainly encountered a fair amount of bad press during what sounds like a difficult production. But that was a while ago, and while it’s certainly possible that some critics had that in the back of their mind when they saw the movie, I think most of those who gave it bad reviews didn’t like it. And, look, it’s a bloated, messy movie that veers wildly from graphic violence to goofy slapstick. There’s no way it’s going to be universally embraced by critics. I happen to think its virtues outnumber its faults, though. But I’m also a fan of John Carter and Cloud Atlas. As for the public: I don’t think it’s just bad reviews that kept audiences away. Not to play Monday-morning quarterback, but nothing about the film’s poster, for starters, says “see this movie.”

Matt: I never got to see The Lone Ranger myself—something I regret, actually, in spite of the bad reviews—but I wonder what, if anything, the movie’s failure says about modern Hollywood. In some ways, it’s the ultimate blockbuster: It’s based on an existing property, features a very bankable movie star, sports some enormous special-effects sequences, and cost hundreds of millions of dollars to make. In other ways, it’s an anomaly: The property it’s based on has been almost completely forgotten by summer blockbusters’ target audience, the genre it represents is completely out of fashion, and according to your description, its attempts to wrestle with politics, history, and national identity fly in the face of every assumption we tend to make about the way these movies are created by committee as easily consumable products. Is there anything we can take away from The Lone Ranger’s failure?

I think one assumption that didn’t pay off here is that all Disney needed to do was attempt to re-create the Pirates films in the West and audiences would show up. It felt lazily marketed to me, like, “Here you go, folks, Johnny Depp’s doing Jack Sparrow-y stuff again. Come on down!” When, really, it’s a lot more peculiar than that. There was a lot more thought put into the movie itself than the way it got presented to the world. And that’s the laziest kind of thinking about blockbusters: If we build this big contraption, people will show up. That said, I don’t know what would have worked. Verbinski squeezed a pretty strange movie inside the blockbuster form.

Matt: All right, let’s wrap things up with the flip side of this conversation. The Lone Ranger was a movie you liked more than a lot of other critics. Is there a 2013 movie other critics liked that you weren’t crazy about?

Keith: Hmm… I’ve been a little puzzled by the way many have declared American Hustle a great movie, but even there I think it’s a good movie. This one’s not exactly widely acclaimed, but I was surprised the Evil Dead remake got as many nice notices as it did. That left me unscared and unamused.

I guess if my fellow critics annoyed me anywhere this year it was on Twitter, where it seemed like every movie of note enjoyed a cycle of praise-to-backlash-back-to-praise (or vice versa) within the first hour of its first screening. Maybe that’s just my fault for paying attention, but it felt far removed from detailed consideration that I like others to bring to a film. Let’s let the wine breathe a minute before we start chugging it next year, okay?

The Lone Ranger is now available on DVD and Blu-ray, and for rental and purchase on digital and on demand services. Here’s its trailer: