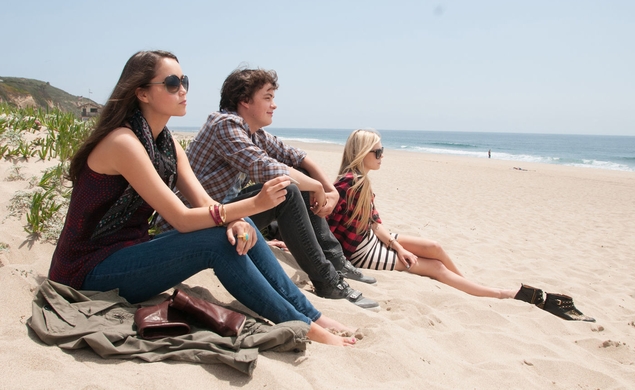 Each day this week, a staff member of The Dissolve will pick a 2013 movie they liked more than the critical community at large. Today, Nathan Rabin recommends The Bling Ring, Sofia Coppola’s film about a real-life gang of teenage criminals who robbed celebrities like Paris Hilton and Orlando Bloom. The Bling Ring received a 60 percent on Rotten Tomatoes and a 66 on Metacritic.

Matt Singer: Scott Tobias wrote The Dissolve’s review of The Bling Ring back in July, and at that time, he gave the movie three stars. Nathan, where would you rank the movie on The Dissolve’s five-star scale?

Nathan Rabin: That is a damn fine question, Matt. While I like The Bling Ring and think it’s underrated and misunderstood, I am not going to mount a particularly fierce or passionate defense of it. I would probably give The Bling Ring three and a half stars, because I felt like Sofia Coppola accomplished exactly what she set out to do in satirizing and critiquing the celebrity-obsessed vacuousness of youth culture. I understand criticisms that the film epitomizes what it’s ostensibly critiquing, but in this instance, style is substance. The parade of glittering, glittery images isn’t a distraction from a narrative the film barely pays attention to; it’s the film’s entire reason for being.

The Bling Ring is scathing in its indictment of the empty-headed materialism of the TMZ generation, but it’s just as scathing in its depiction of celebrities so coddled and oblivious, they barely notice when their homes are repeatedly robbed. I was so intrigued by The Bling Ring that I went out and Netflixed the hilariously heterosexual Lifetime movie version with Jennifer Grey as the mom. It confirmed that it’s not the material, it’s what a filmmaker does with it; with The Bling Ring, Coppola spun a willowy wisp of a story into a cotton-candy concoction with a faint aftertaste of arsenic. That may not represent a 12 Years A Slave or Her level of achievement, but it’s nothing to scoff at either, and I know how much you enjoy scoffing at things, Matt. A regular scoffaholic, you are.

Matt: I do enjoy a good scoff, although I agree with you about The Bling Ring. But other critics accused Coppola of recycling observations from her previous movies about fame and celebrity, like Lost In Translation and Somewhere. What made The Bling Ring stand apart as its own film?

Nathan: To be honest, I don’t think there’s anything wrong with an auteur revisiting pet themes in film after film, and I think Coppola is an auteur whose work comes from a unique place. To me, The Bling Ring is a matter of Coppola finding new, visually dazzling ways to convey her signature obsessions with privilege, wealth, entitlement, and celebrity, rather than merely recycling or cannibalizing her past. Coppola knows this world intimately; as Hollywood royalty, she resides on the other side of the celebrity/stargazer divide, but part of what lends the film an interesting frission of tension is that she’s also weirdly sympathetic to her subjects’ appearance-obsessed superficiality. These girls are nightmares of ego and arrogance, but they’ve also got really great clothes. In the world of The Bling Ring, that stands for an awful lot.

Matt: Were you familiar at all with the real-life case before you saw the movie?

Nathan: I was not. I’d only heard the broad strokes in passing. It’s one of those stories that appears too good to be true, and it made me ask, “How could people be so unbelievably stupid?” I think part of the subversive nastiness of The Bling Ring comes in implicating not just the kids involved, but the parents, and our whole warped value system in its deification of youth, celebrity, beauty, and glamour. Coppola makes it about more than just a crime wave perpetrated by people who have difficulty stringing together words to form coherent sentences.

Matt: There were a lot of movies this year about youth, celebrity, beauty, glamour, and crime, including Spring Breakers, American Hustle, and The Wolf Of Wall Street. What did The Bling Ring add to that particular conversation?

Nathan: The easy answer seems to be that The Bling Ring was all about women being terrible, terrible human beings. That was also true of Spring Breakers, although in that instance, their bad behavior was at least partially instigated by a man who is a very bad influence.

This was a great year for movies about awful people, and I think part of what sets The Bling Ring apart is its breeziness. It’s a trifle of a film about terribly insubstantial human beings. There’s very little to The Bling Ring; it’s a light appetizer of a movie, as opposed to a three-course feast like The Wolf Of Wall Street, and I feel like it captures its period so well that it already looks a little like a period piece from the far-away world of a few years back.

Matt: Do you have a favorite scene from the movie?

Nathan: What I remember most about the film isn’t particular scenes, but the overall look and feel, that wonderfully vulgar mood of adolescent emptiness. If I had to single out a scene, I would choose Emma Watson’s big television appearance at the end, if only because it’s the most overtly satirical scene in the movie, the one that truly lays bare the narcissistic myopia of these characters and the toxic little bubble they inhabit.

Matt: All right, let’s wrap things up with the flip side of this conversation. The Bling Ring was a movie you liked more than a lot of other critics. Is there a 2013 movie other critics liked that you weren’t crazy about?

Nathan: Yeah, as I wrote in the recent Conversation about the big disappointments of 2013, I wasn’t as over-the-moon about American Hustle or Blue Jasmine as my critical colleagues. I think American Hustle is a hell of an entertaining movie, and I understand the enthusiasm for it, but it definitely suffers from being released around the same time as The Wolf Of Wall Street.

All in all, this was a hell of a year. As Scott sagely noted, it was a disappointing year for disappointment, and a really great year for loving all different kinds of films.

Matt: What about the five critics on Rotten Tomatoes who gave A Madea Christmas a positive review?

Nathan: God bless those five brave souls. They see beauty and hope in a sea of ugliness. They are the true heroes of the holiday season.

The Bling Ring is now available on DVD and Blu-ray, and for rental and purchase on digital and on demand services. Here’s the trailer: