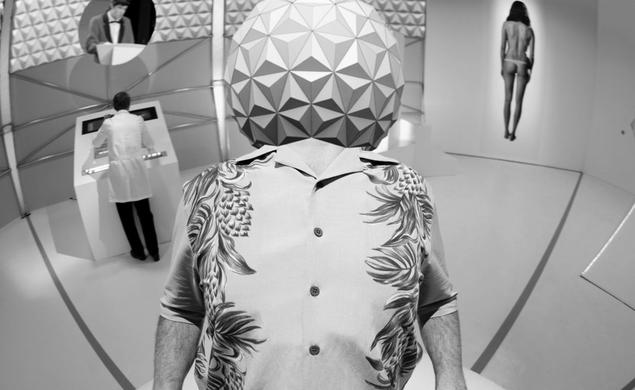 Each day this week, a staff member of The Dissolve will pick a movie from 2013 they liked more than the critical community at large. Today, Noel Murray recommends Escape From Tomorrow, the surrealistic horror film about a family vacation in Disney World that goes horribly wrong. In an impressive feat of guerilla filmmaking, much of the movie was shot in secret and without permission at the Magic Kingdom. Escape From Tomorrow received a 57 percent on Rotten Tomatoes and a 58 on Metacritic.

Matt Singer: Noel, you actually wrote The Dissolve’s review of Escape From Tomorrow back in October. At that time, you gave it 3.5 stars. Has your opinion of the movie changed at all? Would you rate it higher or lower now?

Noel Murray: I might drop it half a star, not because I think the film has aged poorly in just two months, but because at the end of the year, when I’m done making all of my lists, I tend to relativize films more, and see them in the context of everything else that came out around it. I still think Escape From Tomorrow does what it means to do very well. But I just spent a month catching up with all of the top contenders for my year-end best-of, and re-watching most of the films on my Top 15 to confirm their placement. With that competition, Escape From Tomorrow seems more like an interesting trifle, not one of the must-see movies of 2013. But my personal connection to what writer-director Randy Moore is doing with the film hasn’t weakened much.

Matt: What kind of personal connection did you have to the material? Were you subjected to nightmarish vacations at Disney World as a kid?

Noel: We only went to Disney World once when I was a kid, and I have to say: I loved it. It was right before Epcot had its grand opening, but it was more or less operational, so we spent three days pinging between the main park and Epcot, taking the trams and monorails from the campground where we were staying. I think I was 12 or 13 at the time, which might strike some as a little old to be enchanted by Disney, but what I liked about that trip was the sense of freedom. Disney World was a safe enough environment that my older brother and I were more or less allowed to roam free. And with the transportation set-up, we could hop passing vehicles and get pretty much anywhere. There was always something fun and interesting going on, night and day, and not just inside the parks. The campground had movies every night, and other activities. It felt a lot like a child’s version of what being a grown-up must be like: unlimited freedom, perpetual pleasure.

My wife and I haven’t taken our own kids to Disney yet, though we keep planning to. So why did I identify with Escape From Tomorrow? Because on one level, the movie is a travelogue. By shooting inside the park surreptitiously, Moore documents what the real Disney is like. But also, as a married father of two, I recognize that shackled feeling that the protagonist Jim experiences throughout the film. I love my family, but sometimes you’re in the happiest place on Earth and you see young, unattached people walking by, and you pine a little. (Okay, I pine. You’re allowed to have your own feelings.)

Matt: That’s interesting. Although I admired Escape From Tomorrow’s concept, I wasn’t quite as enamored with the execution, and some of the scenes you’re alluding to, in which Jim (Roy Abramsohn) lecherously pursues a pair of underage girls, left a sour taste in my mouth. But it sounds like you would defend those scenes.

Noel: I’ll just say that they struck me as much truer to life than the mad scientists living inside the Epcot dome. The film is an exaggeration, and I don’t think it’s wholly successful. (As I wrote in my review, it’s a little monotonous, repeating the same corroded beats over and over, with no clear endpoint in sight.) But there are good long stretches that seem less like satire to me and more like a fairly honest portrayal of what it feels like sometimes to be a middle-aged schlub, adrift in someone else’s fantasyland.

I get why a lot of critics dislike Escape From Tomorrow. It got a lot of buzz out of Sundance because of the audaciousness of Moore’s shoot, then once Disney decided to ignore the film, the focus shifted from how ballsy Moore was to how little he actually has to say about Disney, beyond some none-too-original eye-rolling. But I wasn’t looking for a scathing indictment of Disney, because I’m not anti-Disney. I responded more to the scene where Jim thinks he’s lost his daughter, or when he and his son feel like they’re going to be stuck in line forever, or when starts daydreaming at the hotel pool. Those aren’t in the least bit surreal or mocking. They’re vivid, melancholy, and for me even moving.

Matt: When Escape From Tomorrow premièred at Sundance, it shocked critics who predicted Disney would never let it be shown anywhere. Instead, Disney never did or said anything about it. Do you think the reaction to the film from the wider critical community would have been different if Disney had made some sort of move against it?

Noel: Maybe a little. Even at Sundance, there were critics who weren’t buying what Moore was selling. I don’t think any of the actual reviews would’ve changed; I believe most critics are pretty good at making up their own minds. But more controversy might have spurred more critics to see Escape From Tomorrow, and then perhaps there could’ve been a larger conversation about what the film does well, beyond people just weighing in pro or con on Moore’s sniggering suggestion that all of the park’s princesses are high-priced prostitutes. I saw the film more as a domestic nightmare, which intensifies as the day wears on. And I liked it because it was set at Disney, not because it “takes on” Disney. It’s both a familiar world and a familiar situation.

Matt: I’m intrigued that you weren’t invested in the film’s selling point—i.e. the underground location shooting at Disney—and wound up liking it more than many critics who were invested in it. Can you think of any other time that’s happened? Where a movie positioned itself as one thing and you found it worthwhile for another?

Noel: Oftentimes movies that get a lot of initial attention for their explicit content (Shortbus, Antichrist) resonate with me for reasons other than what they’re being hyped as. It takes more than chutzpah to make a film worthwhile, but chutzpah helps. In the case of Escape From Tomorrow, the Big Idea forced Moore to work on a set that he didn’t completely control, which meant he had to build his story around what he could actually shoot. That limitation makes the movie better, I think. So many indie films—especially genre films, which Escape From Tomorrow almost is—take place in a generic nowhere. A clearing in the woods. An under-decorated apartment. A suburban street. Escape From Tomorrow is improved by its location, because rather than Jim suffering his anxieties in non-specific places and ways, the script ties him to things that are real: a pool, a sunburn, a concession stand item that makes him feel ill, etc. That’s why the Disney angle matters.

Matt: All right, well let’s close with the flip side, Noel. Escape From Tomorrow was a movie you liked more than a lot of other critics. Is there a 2013 movie other critics liked that you weren’t crazy about?

Noel: Spring Breakers. Not universally beloved by any means, but a favorite of many people I respect. I hated that film. Deep, deep hate. I found its observations on class envy facile, and I found its visual style unimpressive. All the travelogue aspects that I enjoyed about Escape From Tomorrow didn’t work for me at all in Spring Breakers. By about the third slow-motion montage of teens in bathing suits dancing, I was ready to flee the theater. I thought James Franco was pretty funny, though.

Matt: If only the characters had gone to spring break at Disney you might have had a better time.

Noel: “I got Mickey Mouse ears, every fuckin’ color!” Hmmm… you may be right.

Escape From Tomorrow is now available to rent or puchase from numerous on-demand websites and services. Here’s its trailer: