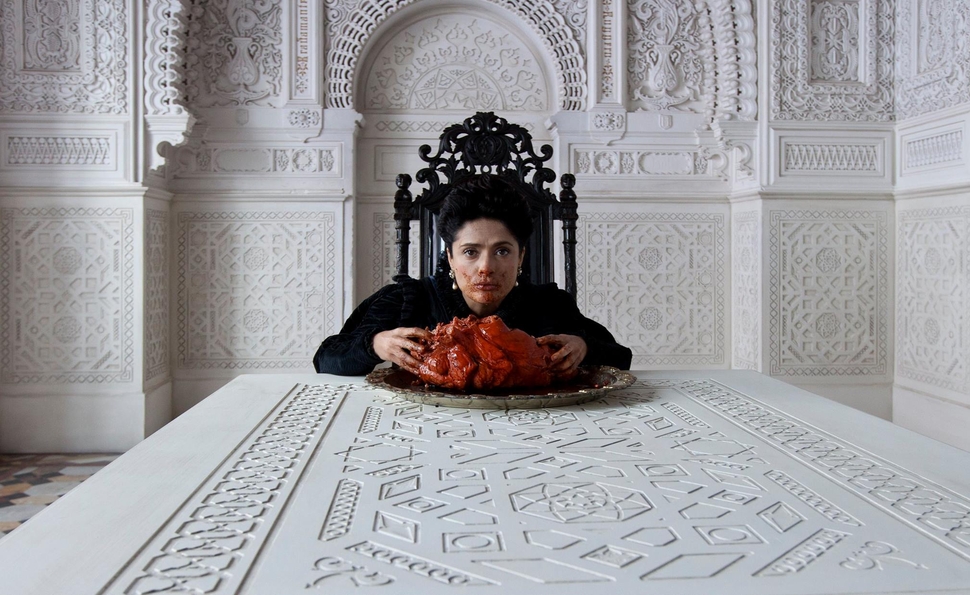 Day 1: A triple helping of WTF

Every year, my entreaty to the Cannes Film Festival is the same: “Show me something I’ve never seen before—something I couldn’t possibly have anticipated.” Cannes almost always obliges, whether it’s via Lars von Trier shooting an entire three-hour movie on a Brechtian chalk-outline stage (2003’s Dogville) or Jean-Luc Godard reinventing the possibilities of 3-D (in last year’s Goodbye To Language). “Let’s get the blindsiding out of the way early,” the 2015 edition apparently decided. This year’s festival served up a triple helping of WTF right on Day One. Things I had never seen before, and certainly did not anticipate, include (but are by no means limited to): Salma Hayek feasting on the bloody heart of a giant sea monster, an old crone suckling the breast of some strange woman in the forest and transforming into the younger version of Joe from Nymphomaniac, and Toby Jones raising a flea that grows to be the size of a hippopotamus.

Those bizarro items are all from the same film. Italy’s Matteo Garrone began his career as a grim, gritty realist (The Embalmer, Gomorrah), but his last feature, Reality, took a sharply ironic turn into fantasy and religious allegory. Tale Of Tales, Garrone’s new picture, is pre-Grimm, having been loosely adapted from a collection of 16th-century fairy tales curated by Giambattista Basile. (The actual authors are mostly unknown.) The three stories Garrone chose, from a total of 50, all involve royalty in some way, with the various kings and queens portrayed by an international cast, all speaking English. Hayek plays a queen whose desire to have a child inspires her to make some horrific sacrifices. In what’s apparently a neighboring kingdom (the movie’s geography is unclear), Vincent Cassel, as king, falls in love with a woman (Hayley Carmichael) he overhears singing in the street, unaware that she’s withered and old, rather than young and beautiful, as he assumes. And Jones, another nearby monarch, attempts to use his giant flea as a tool to keep his daughter (Bebe Cave) at home, with ghastly results.

That last tale is a wild ride, thanks to some hilariously unexpected twists of fate and a potentially star-making performance by Cave, whose facial expressions and vocal inflection uncannily resemble those of young Emma Thompson. But the other two tales feel relatively skimpy, with long periods of stasis between brief moments of bugfuck invention. Perhaps recognizing this, Garrone constantly skips back and forth among the three narratives, with little rhyme or reason; often, one tale will be abandoned for so long that its return is like suddenly remembering last night’s dream in the middle of the day. Guy Maddin employed that device masterfully in The Forbidden Room (which premièred at Sundance earlier this year), but he did so by burying dozens of stories inside others, like Russian dolls. Here, Garrone just randomly cuts to someone else every so often, killing the momentum every time. Ideally, he’d have made three consecutive shorts with a total running time of perhaps an hour: 30 minutes for “The Flea,” 15 minutes each for the others. But that isn’t marketable, even at a festival. 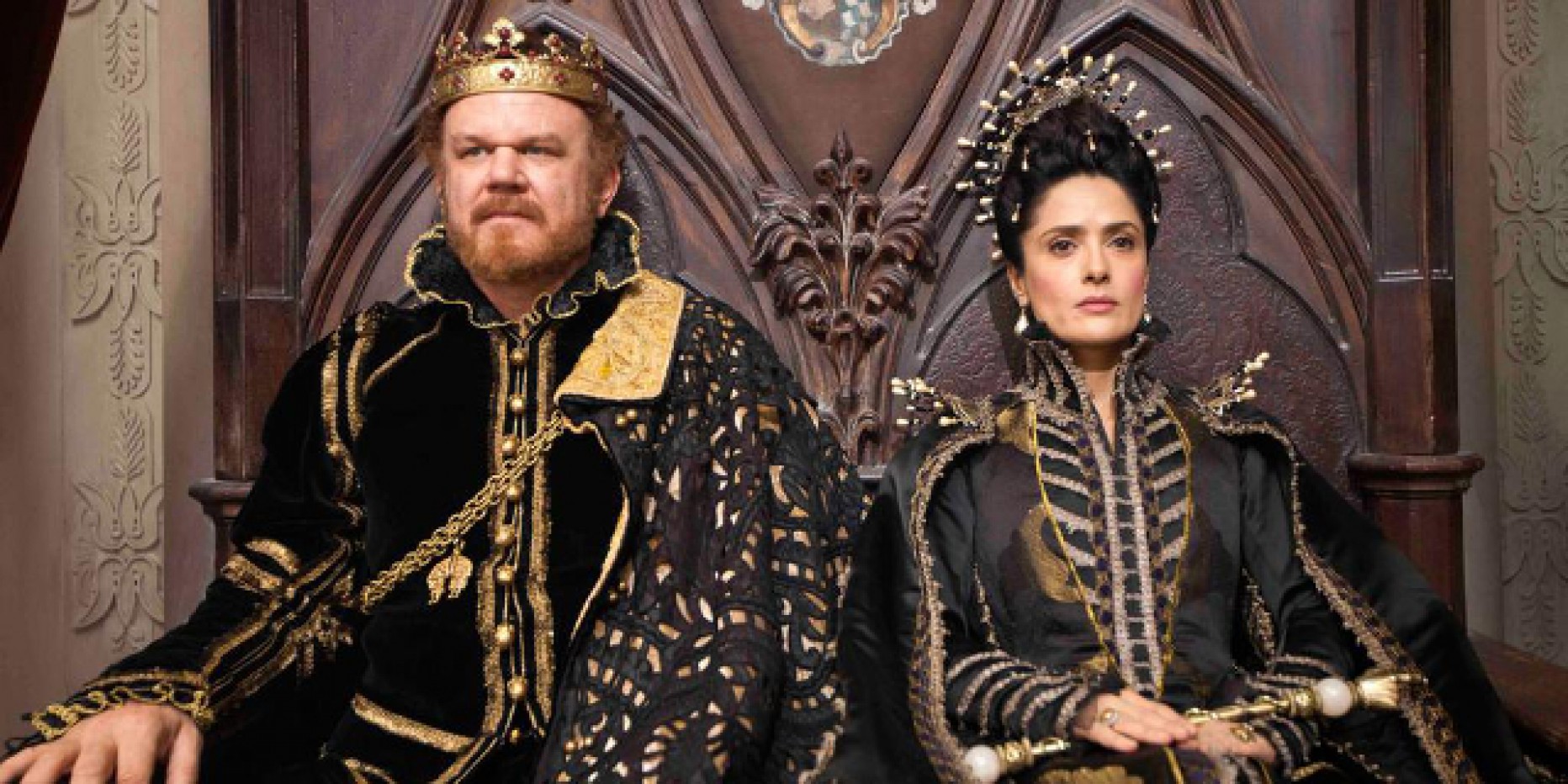 The other two films I’ve seen so far are much more conventional. (I chose to skip the opener, Standing Tall, as it’s not in Competition, and Emmanuelle Bercot’s previous directorial project, On My Own, put me to sleep. Word on the street seems to be respectful at best.) Our Little Sister finds Kore-eda Hirokazu combining the abandoned children of Nobody Knows with the minor-key bickering of Still Walking, creating a lovely family portrait that could have used a little more bite to offset the sweetness. Adapted from a serialized manga called Umimachi Diary, the film first introduces three women in their 20s who’ve been on their own ever since their father ran off with another woman, and their mother, unable to cope, subsequently cleared out as well. Sachi (Ayase Haruka), the eldest, became a surrogate mom to younger sisters Yoshino (Nagasawa Masami) and Chika (the uni-monikered Kaho), and Sachi impulsively invites their teenage half-sister, Suzu (Hirose Suzu), to come live with them after their mutual father dies. Plotless and episodic, Our Little Sister is light on conflict and heavy on beatific smiles, and it continues a good 30 minutes past the point where it feels as if it should end. But it’s the kind of movie in which the characters gradually start to feel like extended members of your own family, and it features dozens of moments so casually lyrical—like Suzu’s sort-of boyfriend taking her on a bike ride beneath a canopy of cherry blossoms, which he’d called a “tunnel”—that it’s hard to begrudge the saccharine dialogue in which the sisters talk openly about how much they love each other. It was also shrewd of Cannes, given the (customary) lack of female directors in this year’s lineup, to lead with such a concentrated dose of estrogen. This film couldn’t possibly love women more.

For a more ominous angle on the gender, there’s Philippe Garrel’s In The Shadow Of Women, which opened the Directors’ Fortnight—the so-called parallel section that’s really an entirely separate festival, run by different people. (Think Slamdance’s relationship to Sundance.) Like Garrel’s previous film, Jealousy, this one treats infidelity as if it’s uncharted territory, rehashing basic conflicts that have been kicking around since long before movies even existed. Married filmmaking team Pierre (Stanislas Merhar) and Manon (Clotilde Courau) seem to have an easy rapport, but Pierre soon embarks on an affair with a young intern, Elisabeth (Lena Paugam), justifying it to himself as simply “what men do.” When Elisabeth, hoping to break up Pierre’s marriage, informs him that Manon is also seeing someone on the sly, the omniscient voiceover narration (courtesy of Louis Garrel, the director’s son) reveals the Neanderthal double standard Pierre mentally applies, condemning Manon for sins he’s committing himself. None of this is particularly incisive or revelatory (though the audience at my screening howled with laughter each time Pierre thought something piggish, as if to reassure seatmates that they recognize unacceptable behavior when they hear it), and Merhar, like Garrel fils, is such a handsomely inexpressive hunk of wood that the narration often blatantly contradicts his non-performance. Garrel has a superb eye—his monochrome widescreen compositions are peerless—but he needs better taste in actors, and something to make a movie about besides cheating.

Tomorrow: Yorgos Lanthimos, whose Dogtooth placed at #25 on The Dissolve’s list of the decade’s best films so far, returns to Cannes—in Competition this time—with The Lobster, about which I know absolutely nothing. Don’t tell me! Also, the latest from Romania’s Radu Muntean (Tuesday, After Christmas), which combines the thriller plot of Rear Window with the breathless excitement of automobile registration.