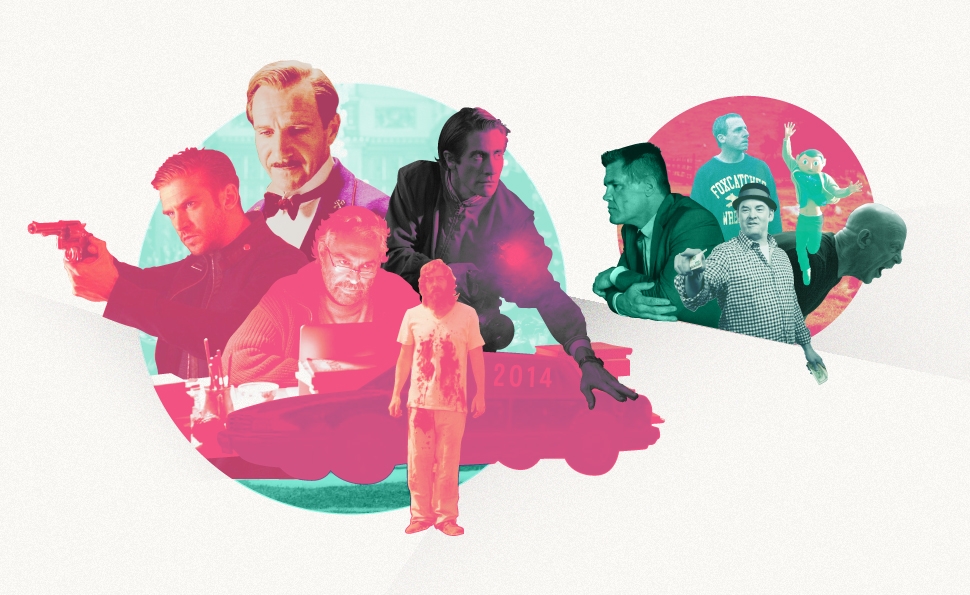 There are a couple of ways to use the word “revelatory” when it comes to acting. Sometimes it refers to a newcomer, an out-of-nowhere talent who unexpectedly delivers startling work, like Blue Ruin star Macon Blair. In that gritty indie revenge drama, Blair looks as if he’s actually living out the film’s blood-and-dirt-covered story. At other times, it can refer to established talents who find new gears, like Jake Gyllenhaal in Nightcrawler, who found ghoulish new depths playing the sort of character he’s never had a chance to play. Happily, 2014 was filled with revelatory work of both sorts, 10 examples of which can be found in the following list of the year’s 10 best performances from men. (Our picks for the best performances from women posted yesterday.) 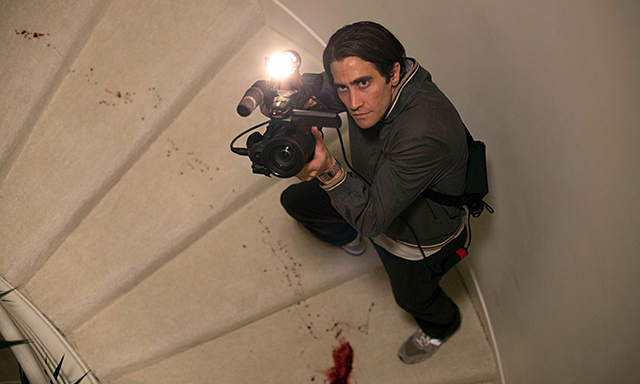 Jake Gyllenhaal, Nightcrawler
Jake Gyllenhaal lost so much weight for Nightcrawler that he resembles a preying mantis as much as a man. It’s as if his sleazy nighttime videographer is rotting away from the outside, leaving only a thin, oily layer of flesh to protect him from an outside world he views with dead-eyed guile and sociopathic ambition. An after-midnight take on Network, complete with an underlying Old Testament morality, Nightcrawler casts Gyllenhaal as Louis Bloom, a friendless thief and neophyte cameraman who stumbles into an exciting, surprisingly lucrative career documenting crime scenes in action. Soon he’s established himself as the Weegee of the West Coast, minus the artistry, and is pursuing boss Nina (Rene Russo) with creepy lines purloined from self-help and romance guides. It’s as if this repellent creature of the night is only pretending to be a human being capable of empathy, using hack lines stolen from books to try to cover up the inky blackness where his soul should be. He’s Los Angeles’ id, a parasite who exists only to document people at the worst moment of their lives, then profit handsomely from his voyeurism. 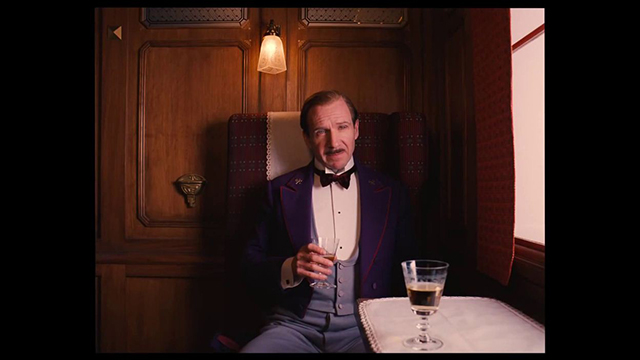 Ralph Fiennes, The Grand Budapest Hotel
How is it that Ralph Fiennes was never in a Wes Anderson film before The Grand Budapest Hotel? Like Tilda Swinton, Ed Norton, and Adrien Brody, Fiennes is a late-arriving member of Anderson’s repertory company who fits in so well that it’s like he’s been there since Bottle Rocket. As a European mountain resort’s famed concierge, Monsieur Gustave H., Fiennes isn’t just fast-talking, foul-mouthed, dandyish, and kind-hearted. He’s in the great tradition of Anderson heroes who draw on phenomenal interior and exterior resources to execute elaborate plans, all while making sure to carve out a little time each day to mythologize themselves and their cohorts. Fiennes also follows the Anderson model of giving surprising depth and soul to a comic, fairly ridiculous character. Whether he’s bedding wealthy widows or standing up to proto-fascists, Fiennes’ Gustave has flair and purpose.

Haluk Bilginer, Winter Sleep
Playing an asshole is easy. Playing an asshole who’s convinced that he’s a truly swell guy, however, is a remarkable challenge, which little-known Turkish actor Haluk Bilginer tackles with courageous vigor. So subtle and cagey is his performance that it takes a long time to realize that Winter Sleep, Nuri Bilge Ceylan’s three-hour Palme d’Or winner, is an agonizingly detailed portrait of noxious self-justification. Over the course of the movie’s leisurely running time, and through several epic conversations, Bilginer’s hotel owner, Aydin, methodically steamrolls over his wife, his sister, his tenants, and just about anybody else who crosses his path. Even as Aydin’s grotesque true nature is gradually revealed, however, Bilginer makes it clear that in his own mind, he considers himself a model of fairness, understanding, and rectitude. Rarely does a performance explore willful blindness to one’s own personality defects quite so deeply. 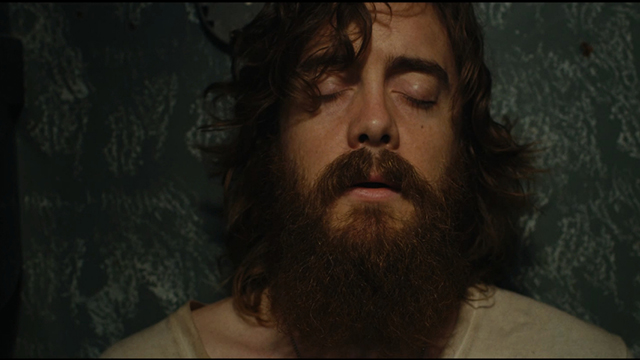 Macon Blair, Blue Ruin
Revenge thrillers just keep cycling back to the forefront of American cinema over and over, and naturally so: Being able to take on injustice single-handedly is an alluring fantasy. But not in Jeremy Saulnier’s terrific Blue Ruin, where a troubled, homeless man sets out to kill the criminal who murdered his parents. There are a number of ways to play revenge quests, and most of them—including John Wick and The Rover this year alone—handle it by turning the damaged protagonist into a grimly robotic pursuer, a Terminator of unstoppable description. But Macon Blair plays Blue Ruin’s Dwight as a soulful, barely functional man fighting his own trauma and his own morality, and possibly his own mental illness, as much as he’s fighting physical enemies. Given some of the story’s downturns, it’d be easy to make Dwight laughable or even contemptible, but Blair keeps his desperation and fear clear onscreen, often without needing words to spell out how he’s feeling. It’s an expressive but well-handled performance, balancing Dwight’s need for closure with his profound difficulty at doing what he deems necessary to achieve it, and Blair puts enough nuance into the man to keep him from turning into either a tough-guy cartoon, or a wimp.

Dan Stevens, The Guest
Cousin Matthew, he is not. Best known to audiences as a milquetoast sop on Downton Abbey, Dan Stevens exposed several different sides of his acting persona (and an alarmingly well-defined torso) in Adam Wingard’s wild action-thriller The Guest. In a role designed to keep viewers on their toes and always second-guessing his motivations, Stevens draws on his innate charisma (and never-more-arresting blue eyes) as David, a mysterious stranger who shows up at the home of the Peterson clan, intending to pay his respects to their fallen son, whom David served with in Iraq. From the moment the front door opens, it’s unclear whether David is an angel, a devil, or some combination of both, sent to the Petersons at a vulnerable time, and Stevens does superb work navigating that ambiguity. David is charming and scary, sexy and sweet, protective and dangerous, and capable of switching modes on a dime—and so is Stevens. As the movie shifts into full-on action-movie mode and David’s true nature is revealed, Stevens’ performance transitions into that of a more straightforward (but no less compelling) bad-ass; but it’s in those beguiling, discombobulating early scenes that Stevens truly excels, proving that his decision to hop off the Downton gravy-train and into film acting was the right call. 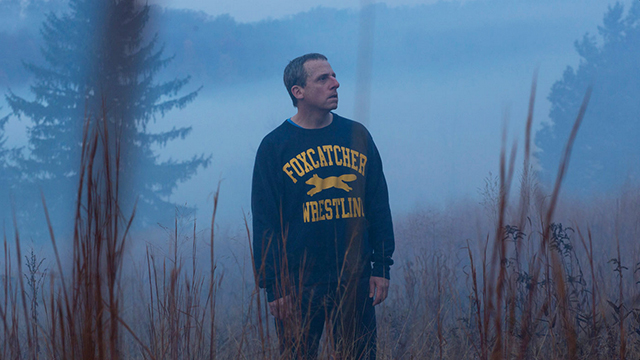 Steve Carell, Foxcatcher
Look past the prosthetic nose. As with Cyrano de Bergerac, there’s more to Steve Carell as John du Pont than the Alpine slope extending from the center of his face, though it certainly makes a class statement when pointed upward. Of the trio of superb performances in Foxcatcher, Carell has by far the showiest role, even without the nose; as brothers and fellow Olympic gold medalists in wrestling, Channing Tatum and Mark Ruffalo do quieter, more physical work, expressing themselves as much in grapples as in words. And yet Carell’s read on du Pont’s soul-sickness is eerily precise, a deadly fusion of aristocratic arrogance and entitlement, child-like neediness, and gnawing psychosis. There are revelations about du Pont’s mother and his lonely upbringing, but they almost don’t need to be there to account for why he acts out so tragically. Carell plays him as a contradictory figure, imperious about his wealth and privilege to the point where he’s appalled when money can’t buy him everything, yet pitifully weak in his attempt to court these brothers and be seen as a wrestling mentor. Du Pont wants to be called “the Golden Eagle,” but Carell clips his wings. 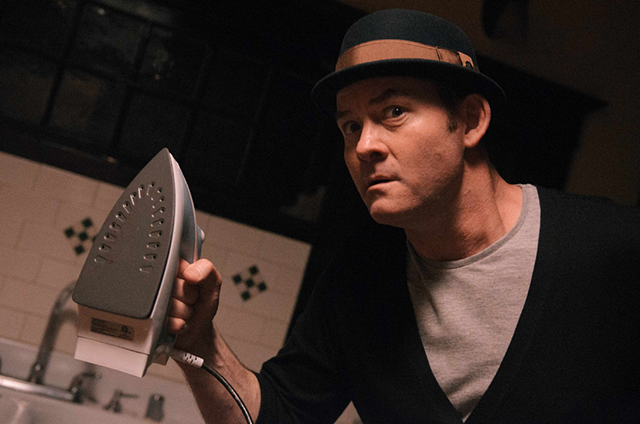 David Koechner, Cheap Thrills
David Koechner doesn’t leaps to mind in discussions of emotional truth. He’s a terrific clown, skilled at embodying aggressive, abusive loudmouths and tools. And that’s precisely the skill set that his role in Cheap Thrills seems to require, so it isn’t hard to understand why director E.L. Katz cast him. Something peculiar happened, though: Koechner took his absurd character semi-seriously. He is frequently hilarious as Colin, a wealthy hedonist who entertains himself and his wife by offering a couple of hapless schmucks increasingly large sums of money to perform increasingly humiliating, horrible tasks. But rather than trot out his standard vulgar-boor routine, Koechner plays it affable and low-key, treating Colin as an actual person rather than the plot device he so clearly is. At no time does he come across as cruel or sadistic, even as he’s goading people into amputating digits. He’s just a regular guy with extremely outré ideas about what constitutes a super-fun party, which is orders of magnitude more interesting, and even challenging, than the character likely appeared on paper. 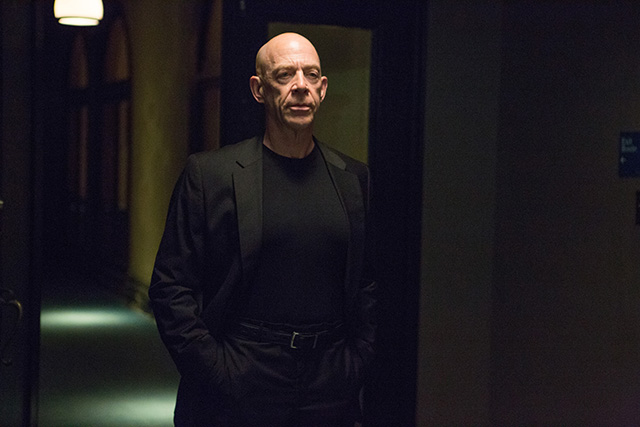 J.K. Simmons, Whiplash
J.K. Simmons has been around for ages playing characters as intense as a neo-Nazi on Oz and the perpetually apoplectic J. Jonah Jameson in the Sam Raimi Spider-Man movies. (You know, the mostly good ones.) But all that remarkable work feels like a preamble to his career-defining role in the Sundance smash Whiplash as Terence Fletcher, a brilliant but mercurial music teacher who prides himself on pushing his students far beyond their breaking points. His muscular torso squeezed into tight black tee-shirts, Fletcher is equal part sadistic life coach, mentor, and nemesis, a purist who worships at the church of jazz and is intent on creating at least one musician for the ages, even if it means destroying dozens of others in the process. Damien Chazelle’s searing psychodrama pits Fletcher against Miles Teller’s Andrew Neiman, a monomaniacally focused upstart willing to risk everything for greatness, even his own health and sanity. Simmons is a poet of profanity here, a machine-gun of a man who sees everyone as a potential enemy to be obliterated. Yet there’s a delicacy to Simmons’ performance and a precision in his personal habits and manners that contrasts fascinatingly with the profane, unrelenting fury that characterizes the character at his most extreme and volcanic. In 2014, few characters hit harder, literally and figuratively, than Simmons’ deranged zealot of musical perfection. 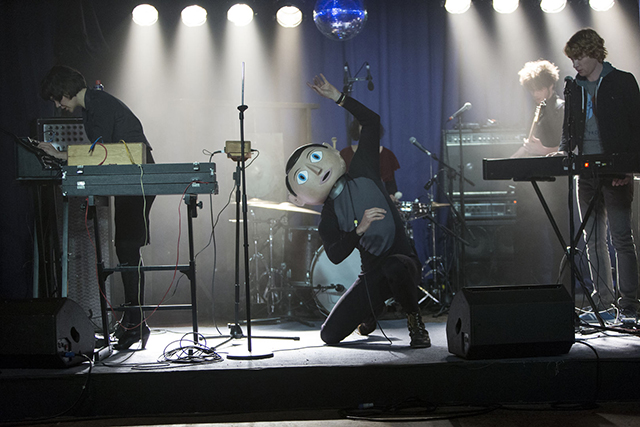 Michael Fassbender, Frank
Lenny Abrahamson’s Frank, and the eponymous figure at its center, could have easily succumbed to the gimmickry of its premise: Movie stars of Michael Fassbender’s magnitude and attractiveness aren’t usually relegated to performing within giant hollow cartoon heads. But even if the film’s third act didn’t reveal the vulnerable, damaged man beneath the mask, it would still be clear that Fassbender is under there playing Frank. As the enigmatic frontman and muse of would-be art-rock superstars The Soronprfbs, Fassbender has presence, that nebulous aspect of performance that can’t be taught, only earned. He turns a literal walking cartoon character into an actual human being—a deeply weird and quirky one, no doubt, but one that lays the groundwork for the third-act revelations that get at the heart of Frank, and Frank. In the astonishing, deeply moving final scene, Fassbender exposes Frank’s soul without letting go of the mystery that makes the character, and the performance, so uniquely alluring. 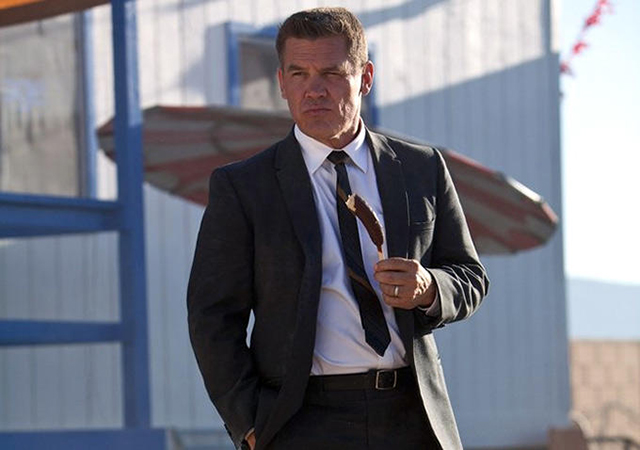 Josh Brolin, Inherent Vice
One of the most telling moments Josh Brolin has as “Bigfoot” Bjornsen, an L.A. cop with a haircut sharp enough to grate cheese, is also one of the least ostentatious. While talking on the phone to “Doc” Sportello (Joaquin Phoenix), he’s shown in his natural environment, a beyond-square home with all the beige and yellow accoutrements favored by end-of-the-1960s suburbia. He’s got everything a law-and-order type of guy could want. And he’s clearly miserable. Maybe that’s why he spends much of his time alternately chasing after, busting, and partnering with Doc, his counterculture opposite, whom he views as some mix of archenemy and soulmate. It’s a performance of big moments, as when he yells for more pancakes in Japanese, and small touches that make Bigfoot unexpectedly sympathetic, offsetting his ruthless power-tripping with a sense of ennui. He’s The Man, but that clearly isn’t working out for him like he’d hoped.