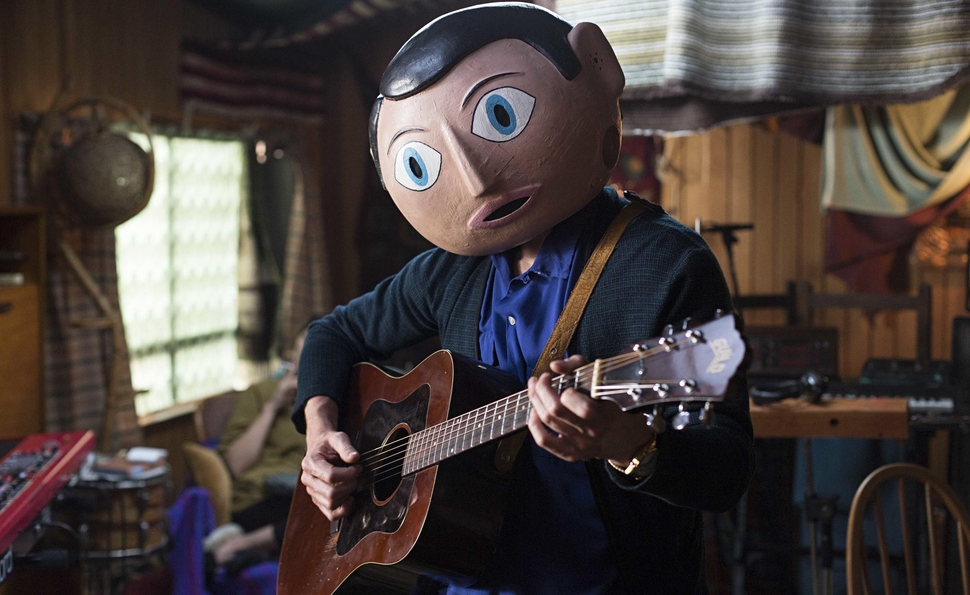 “Quirky” is a mode independent films slip into too easily, often as a way of softening some ugly realities of the human experience, like depression, family dysfunction, or mental illness. Frank, on the other hand, is more of a deceptively quirky film. Because it’s a movie about a man who lives his life inside a giant papier-mâché head, it’s inevitably a little offbeat. But after introducing Frank (played by Michael Fassbender), the leader of an art-rock outfit called The Soronprfbs, and showing him playfully interacting with his kooky bandmates, Frank gradually reveals that its title character isn’t benignly eccentric. He’s damaged to his core.

That may make Frank sound pretty grim, but it really isn’t. It’s just more honest than movies like this usually are. Participatory journalist Jon Ronson—who co-wrote the script with Peter Straughan—based Frank loosely on his own experiences playing keyboards briefly in the 1980s for masked British musician/comic Frank Sidebottom. Domhnall Gleeson plays the Ronson surrogate, Jon, an amateur singer-songwriter who meets The Soronprfbs just as their scraggly, bearded keyboard player has a breakdown. The band’s depressive manager, Don (Scoot McNairy), who has a mannequin-sex fetish, convinces Jon to fill in for a club gig that flames out after just a minute, and the experience is so exhilarating—and Frank’s enormous head so fascinating—that Jon offers to use his life savings to help The Soronprfbs rent a cabin in the woods to record an album.  But while Jon means well, he has an idea of success that involves YouTube, social media, and industry showcases, all of which are out of character for this group of oddballs.

Frank director Lenny Abrahamson establishes the movie’s central dynamic early on, with Jon’s naïve efforts to drive The Soronprfbs to success leading to him getting treated warmly by Frank and as a malicious usurper by the rest of the band—especially Frank’s theremin-playing right-hand woman Clara (Maggie Gyllenhaal), who initially seems to be stubbornly protecting Frank’s artistic integrity, but later reveals an even stronger motive for pushing Jon away. The movie is often hilarious in the early going, as Jon pitches his dippy observational songs, and posts shallow tweets about his yearlong adventure in the wilderness with a man who never removes his fake head.  (When Jon asks Don how Frank shaves, eats, and washes, the manager urges him to “just go with it.”) But the joke starts to wear a little thin after the first half-hour, and threatens to dead-end completely when Jon—who eventually becomes as disheveled as the keyboard player he replaced—decides to take advantage of Frank’s cult following online to book The Soronprfbs into a slot at SXSW in Austin, Texas.

In Austin, the relationships shift a bit, as Clara rails against the corniness of the alternative-music scene (“I’m not playing the fucking ukelele!” she hisses), and Frank gets increasingly manic in his attempts to write his most “likable” songs and cash in on his unexpected popularity. Abrahamson maintains a snappy pace and a consistent tone through roughly the first half of Frank—keeping everything darkly comic and yes, “quirky”—but in Austin, The Soronprfbs become a lot harder to take, and the movie’s observations about making music and selling music start to seem a little trite. Frank pulls out of that spin spectacularly, though, by diving headfirst into the sadness at the heart of Frank, and Frank.

Given that Fassbender spends almost the entire movie encased in papier-mâché, he gives an astonishingly nuanced performance. He’s funny when accommodating Jon’s request for clearer social cues by announcing his facial expressions (like “welcoming smile,” and “flattered grin”); he’s sweet when serving as the band’s spiritual guru; he’s powerfully melancholy when alluding to a dark past in Bluff City, Kansas. It’s not giving too much away to say that Jon eventually uncovers most of Frank’s secrets, and yet as played by Fassbender, Frank remains mysterious right up to the end.

That’s because what Frank is really about is how Jon can’t be Frank, no matter how much he scrutinizes his mentor, and no matter how much he tries to screw himself up enough to get inside Frank’s head (so to speak). Early in the film, when Jon gets on the stage for the first time with The Soronprfbs, his pleasure in sharing a spontaneous musical moment with strangers is infectious. But the truth is that Jon is a mediocre musician, whose fundamental lack of understanding of Frank’s art is as destructive as his bandmates suggest. What sets Frank apart from other indie quirkfests is that it’s so unforgiving—toward Jon, and to the very idea that everyone has music inside them to share. As it builds to its closing song—a profoundly moving final scene—Frank reveals the full extent of its refreshingly rough message. Here’s a seemingly twee movie that ultimately, surprisingly argues that some music isn’t for everybody, some people are too broken to fix, and some would-be artists are better off in the audience.