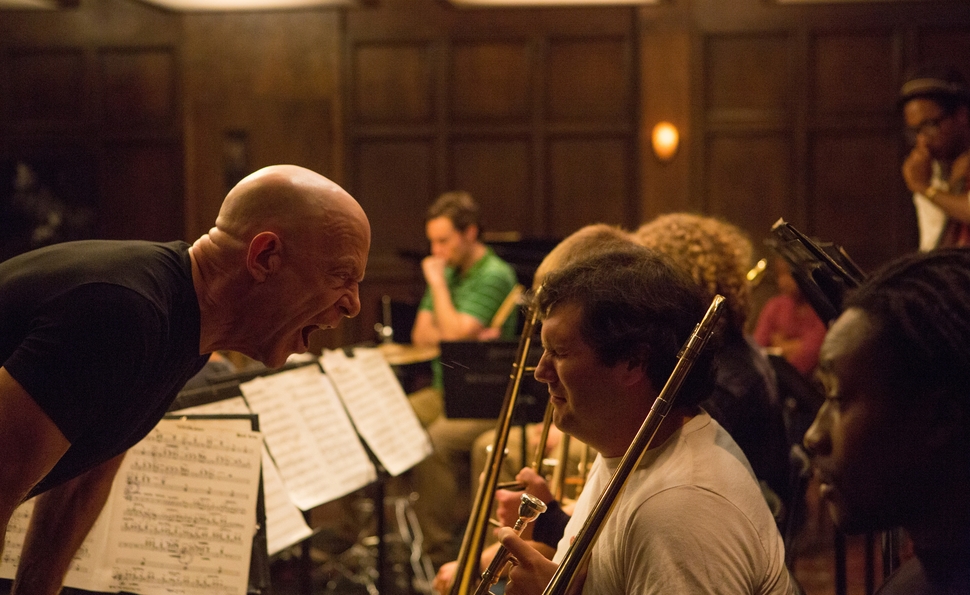 As Terence Fletcher, a pathologically obsessive music teacher at the best musical conservatory in the country, Whiplash co-star J.K. Simmons delivers a performance of such fury that he seems primed to explode even when he’s being calm. If anything, that calm is even more terrifying for his students, who both admire Fletcher and live in constant fear of his outbursts and abuse. Fletcher has the potential to lull them into a false sense of security that will leave them defenseless for the next attack.

It would be easy for a character actor with a role that juicy—one that feels like an Oscar turn for a man who’s long overdue for such accolades—to go crazily over the top, to play him with expectorating, scenery-devouring excess. But Simmons brings an appropriately musical sense of precision to everything the character does, from the careful way he hangs up his hat and jacket upon entering a practice space to the staccato rhythms of his verbal tirades, which are so extreme and intricately worded that they’re liable to have audiences squirming in their seats as well. When Fletcher goes off, he doesn’t just seem mad at whatever hapless student happens to be disappointing him at the time. He seems enraged at the world in a way that threatens to shatter the fourth wall.

Simmons completely dominates Whiplash, but he isn’t its protagonist. That distinction belongs to Miles Teller as Andrew Neyman, a quiet young man of modest origins who has channeled all his energy and ambition into becoming one of the greatest drummers alive. Fletcher takes an interest in Andrew, but from the beginning, his mentorship has a harsh, even abusive edge. It’s unclear whether the rigor of practice sessions, rich in psychological torture and sweaty breakdowns, will push Andrew and his cohorts to greatness, or destroy them on a spiritual level.

Whiplash derives much of its thrilling unpredictability from its principled unwillingness to reveal what kind of movie it will ultimately be. Is it an unusually tense, dark, and profane example of the subgenre where a passionate but unconventional mentor leads his charges to greatness through exhausting but ultimately productive means? Or is it a grim dual character study about how the pursuit of greatness, when removed from any other considerations, including empathy and concern for other people, can transform people into monsters? At times, Whiplash suggests a dark riff on an early Tom Cruise movie, with Teller in the Cruise role of the obsessed hotshot committed to being the best in the world, and Simmons as the hardass mentor (think Robert Duvall in Days Of Thunder, Paul Newman in The Color Of Money, or Tom Skerritt in Top Gun) who pushes his protégés to heights they never imagined possible.

Whiplash gets less predictable as it goes along, and writer-director Damien Chazelle—a prodigy in his own right, who triumphed with Whiplash at this year’s Sundance before turning 30—shows an admirable willingness to push Andrew’s obsessiveness into the realm of something self-defeating and abusive. The film’s aversion toward clichés and hitting expected beats lends it a rare, welcome edge of danger.

Whiplash is really about Andrew’s journey from raw yearning to a place of arrogance and determination that allows him to square off against his beast of a mentor. The climax is an all-out war of wills, a virtuoso closing setpiece of pummeling intensity and raw power. Teller’s first triumph is not being completely blown away by Simmons at his most mercurial and wildly charismatic, but his achievement goes far beyond that. Teller doesn’t shy away from making Andrew unsympathetic, even loathsome at times, as in a deeply uncomfortable scene where Andrew, high on his own inflated self-regard, brutally dumps a girl he’s been courting on the grounds that a romantic relationship will distract him from becoming his generation’s Buddy Rich.

Whiplash powerfully conveys how the monomaniacal focus and intensity necessary to achieve greatness can coarsen and corrupt both sides of the mentor/protégé relationship. Like Terence Fletcher, Whiplash alternates between quiet scenes rippling with tension and the looming threat of violence, and viscerally powerful moments when that threat of violence explodes into the real thing. But when Simmons’ words hit, they land with the force of a heavyweight’s right hook.