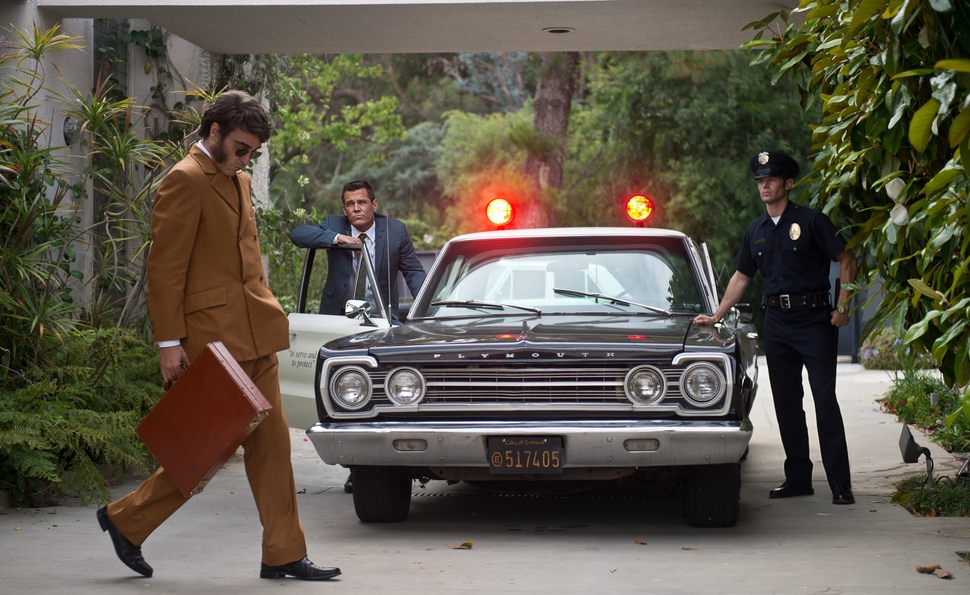 Paul Thomas Anderson’s adaptation of Thomas Pynchon’s 2009 mystery novel Inherent Vice opens just as the book opens, with sort-of femme fatale Shasta (Katherine Waterston) arriving on the Gordita Beach-adjacent doorstep of pot-smoking P.I. Doc Sportello (Joaquin Phoenix) after being away for more than a year. Pynchon’s description of her sets up the film to come: “Back then, it was always sandals, bottom half of a flower-print bikini, faded Country Joe & The Fish T-shirt. Tonight she was all in flatland gear, hair a lot shorter than he remembered, looking just like she swore she’d never look.” For Doc, there’s his world—sand, easy dope, good company, after-hours pizza, Southern California languor—and there’s flatland, the straight world he knows how to navigate for cases, but which he otherwise treats as hostile terrain. He’s learned how to balance one world against the other, but the balance is about to shift. It’s 1970. Flatland is encroaching.

Shasta knows this better than most. She’s been spending her time there, hence the new look, and will soon disappear into it again, leaving Doc to search for her as he picks up other cases—hunting a missing bodyguard, and a dead-but-maybe-not surf saxophonist (Owen Wilson). Eventually, they all turn out to be part of one big mystery, all related to the mysterious “Golden Fang,” an enemy with one name but many faces. Like Pynchon’s novel, Anderson’s film follows Doc through a labyrinthine plot that takes him from the corridors of government power to a New Age rehab clinic to a Topanga Canyon estate overrun with rock musicians as it introduces more amusingly named characters (“Puck Beaverton,” “Sauncho Smilax,” “Japonica Fenway”) than most viewers will be able to sort out on first viewing. The names pile up, the narrative becomes harder to untangle, and it all feeds into an atmosphere that mixes dread and wistfulness. The more self-aware characters already seem nostalgic for the period in which they live. They hear the clock ticking behind the waves.

Alternately standing in Doc’s way, helping him along, and kicking his ass is “Bigfoot” Bjornsen (Josh Brolin, perfectly cast), a hulking, crewcut-sporting cop with sidelines in acting and abuses of power. The two share the most complex relationship in the film, a sometimes-violent antipathy that never fully hides a grudging admiration, and maybe an underlying sympathy that neither can express or understand. Doc keeps a Krazy Kat comic hanging on his fridge. Maybe it amuses him. Maybe it reminds him of the cycle of abuse in which he and Bigfoot have become locked. Even more than Doc’s casual relationship with Penny (Reese Witherspoon), a sympathetic assistant D.A., their intensifying interactions show that the divide between the square world and Doc’s milieu, never strong to begin with, has not just begun to crumble, it’s being actively destroyed by a conspiracy more far-reaching and insidious than even the most paranoid hippie fantasies can imagine.

Anderson has dealt with some of these themes before. Boogie Nights is, above all, a movie about how the pleasures of one era curdle with the changing times. He takes a strikingly different approach here, however, one filled with long, tense scenes that recall The Master. Anderson sustains a mood of discomfort, breaking from it only occasionally, as in a flashback set to Neil Young that recalls a happy, rain-soaked afternoon between Doc and Shasta in a mostly abandoned corner of Los Angeles. Doc soon returns to the scene of that moment and finds the place changed, a monolithic office building standing where a vacant lot once was. Working with cinematographer Robert Elswit, Anderson mostly uses the tools of Inherent Vice’s era to achieve these effects. It’s very much a film, with the texture to show it, and choices inspired by the early 1970s, from an Robert Altman-esque party sequence to a cramped conversation between Doc and a client named Tariq (Michael K. Williams) shot like an exploitation film that didn’t have time to get enough coverage.

Anderson called on the opening of 2001: A Space Odyssey for the first scenes of There Will Be Blood. Inherent Vice often recalls Dr. Strangelove, for reasons beyond Pynchon’s flair for colorful names. Doc encounters one character after another driven by a mix of blind self-interest and insanity, until both seem to be universal conditions. As he investigates, he uncovers a crisis set in motion by conditions put in place before the film even begins. It all serves a portrait of 1970 California that mixes absurdity with an air of looming cataclysm, a volatile formula that wouldn’t work without Phoenix’s performance. He’s broadly comic at moments. No matter what he sees, Doc never loses his ability to be astonished, and to respond with the exaggerated gestures of a silent-era clown. He’s no fool, though. The fog of weed prevents him from scratching out notes more detailed than “something Spanish” when given a Spanish name, but Phoenix plays him as a shrewd operator behind the wild hair and sideburns, and a man of deep compassion, one aware of the fragility of the world around him. He may be a wreck by flatland standards, but who cares what they think?

Also helping maintain just the right tone: A lot of Pynchon’s prose makes it to the screen via Doc’s friend and former assistant Sortilège (musician Joanna Newsom, in her feature-film debut), a beatific, spacy, possibly psychic presence who does double duty as narrator and character, showing up from time to offer Doc guidance and gentle reassurance that he’s doing the right thing, or at least doing the best he can under the circumstances. In the sort of times in which Doc finds himself, filled with unseen peril, shifting sands, and irrevocable changes, maybe that’s the best anyone can hope to do.