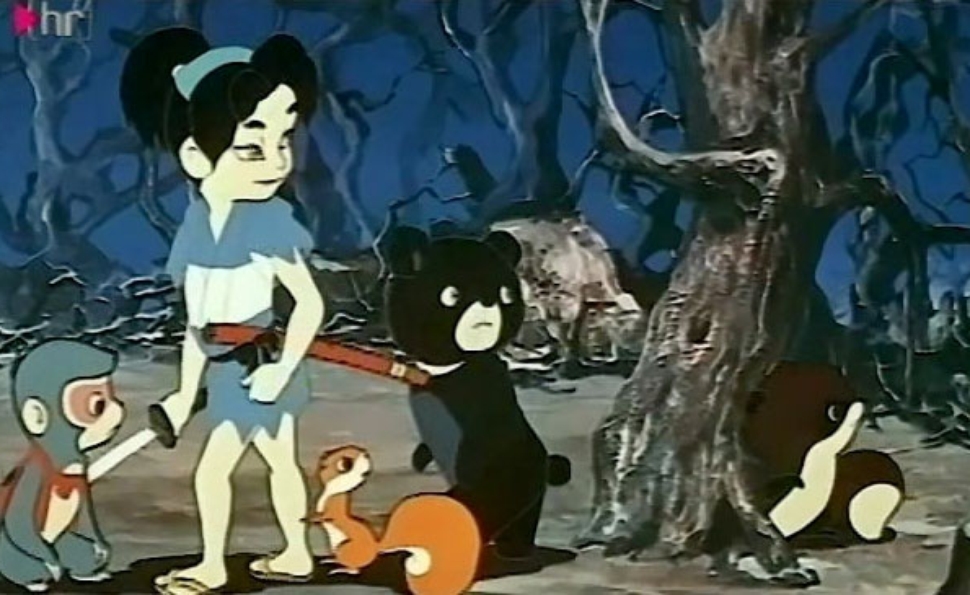 While it’s terrific that Warner Archive has been bringing films to light that the public couldn’t previously access, the market realities that bring MOD releases to consumers without frills or extras can still be exasperating. In the case of a film like 1959’s Magic Boy, the kind of making-of featurettes and marketing details that come standard on most modern releases seem particularly crucial, given that the film’s history is much of what makes it exceptional. The first Japanese animated film imported for release in America, Magic Boy wasn’t a Western box-office success, but it launched the slow process of indoctrinating animation-starved Western audiences with the idea that anime told sophisticated stories in a narrative and artistic style distinct from Western animation.

It also caught a Japanese animation industry in the middle of a major shift away from individual efforts and toward a studio system. It was only the second animated feature produced by Toei’s influential animation division, which was later responsible for groundbreakers as diverse as the Mazinger Z robot stories, the space-opera Space Battleship Yamato saga, and the Dragon Ball Z and Sailor Moon TV series. Magic Boy shows heavy Western influence, but it’s also one of the earliest products of a newly established studio just finding its feet, and figuring out how to compete in a global marketplace while still respecting its country’s artistic distinctiveness. It was also, incidentally, produced in Cinemascope, making it Japan’s first animated widescreen release.

The original fable, heavily influenced by Japanese folklore but taken from no specific legend, follows a peasant boy named Sasuke. (He’s a ninja in the original Japanese version, a more noble samurai in the MGM marketing for the film’s 1961 American release, and just a kid with a katana as far as the English dub is concerned.) Sasuke lives in a pleasant house in the woods with his older sister Oyu and a bevy of animal friends, which act like clever but troublemaking children who regard Sasuke as a trusted older brother. One of them—a fawn unfortunately named Tinkle, because of the jingling sleigh bell he wears around his neck—bears a strong resemblance to a simplified Bambi with Mickey Mouse ears. That resemblance only becomes stronger during an extended, horrifying scene where Tinkle loses his mother to a monstrous black salamander, an alternate shape for the evil witch Yakusha, who seems to kill for pleasure. Grief-stricken, Sasuke embarks on a quest to learn magic so he can destroy her—a bold decision, since it may end a reign of terror stretching back to Yakusha’s origin a millennium ago, but also an ill-advised one, since it leaves Oyu, Tinkle, and Sasuke’s other animal buddies completely unprotected, to the glee of Yakusha and her fractious bandit hirelings.

For anime fans, Warner Archive’s release comes with a series of aggravations: It’s MGM’s 1961 American dub, with no original-language option, but also without any credits for the American voice cast. The body of the film keeps the bandits’ original Japanese-language songs intact, but without subtitles, so there’s no hint what they’re singing. And the opening and closing music is overdubbed with a crooning, clunky Danny Valentino ballad with an embarrassingly stereotyped “Oriental theme music” riff and comically banal English lyrics. (“There was a boy named Sasuke in Japan, he loved the friendly creatures of the wood / The monkeys and the birds, the squirrels and the deer, And animals loved him, ’cause he was good.”)

But while the clumsy English/Japanese hybrid doesn’t fully respect serious fans or serve casual American viewers, the film itself has plenty of charms, starting with its unusual art design. The pacing, tone, and story conceit all mimic Disney predecessors from Snow White to Bambi, with pastoral forest interludes alternating with orchestra-driven, frightening conflicts, plus a few songs thrown in for good measure. As with Disney films of the time—and Japanese manga going back to the form’s origins—Magic Boy puts relatively simple characters against lush backdrops. In this case, those backdrops are realized for maximum color, and designed for emotional impact: autumnal yellows and oranges during a last happy scene before darkness descends, bleak blacks and grays as Tinkle and his mother fight for their lives, bruised-looking purples and reds as Yakusha dances wildly for a bandit audience. The magic, with characters melting and reforming, or disappearing in screen-wipes, seems more familiar from the surrealistic bent of Fleischer animation, particularly the perky yet nightmarish tone of the Betty Boop cartoons. And the characters are heavily influenced by traditional Japanese yokai scrolls: While Tinkle looks like Bambi, Sasuke, with his red-lined eyes and mouth, and Yakusha, with her slit eyes, prehensile hair, and gaping maw, look like nothing on American film screens, then or now.

Magic Boy’s animation varies, as if, TV-style, different scenes were produced by different committees. The laid-back opening sequences of Sasuke and the animals gathering for, and sitting down to, a sweet-potato dinner are marvelously fluid, Yakushu’s dance is eerie and mesmerizing, and the final battle is riveting. The animators handle water exceptionally well, with the attention and detail of Disney’s Pinocchio; the survival battle between the salamander and the deer is particularly chilling. Other scenes are clunky and jerky, or visibly recycle animation, and the film’s pacing is similarly herky-jerky. The film also veers strangely in style when dealing with the bandits, who are so bizarrely yet specifically caricatured that they suggest real-life models—especially the two comic-relief fellows who spend half the film dealing with a tiny, recalcitrant girl who resents having her trunk stolen, and bullies them relentlessly trying to get it back. Those scenes drag, but they also invite endless speculation about who the characters were modeled after, and why their interaction with the child is so key.

That’s just a small amount of the information out there that would give this release a context elevating it past the level of a pretty, occasionally glorious, but often muddled production. Co-directors Akira Daikuhara and Taiji Yabushita worked on many other Toei films—particularly Yabushita, who also co-directed Toei’s animated debut, Panda And The Magic Serpent, and Magic Boy’s follow-up, Alakazam The Great, both of which Magic Boy beat to American shores by only a few weeks. All three were picked up by different studios, which raced to bring them to screens—and Magic Boy happened to win out, less on individual merit than on MGM’s release timing. In so many ways, the story behind Magic Boy is as interesting, or more so, than the film itself. It’s a pity that the story itself tells so little of the story.