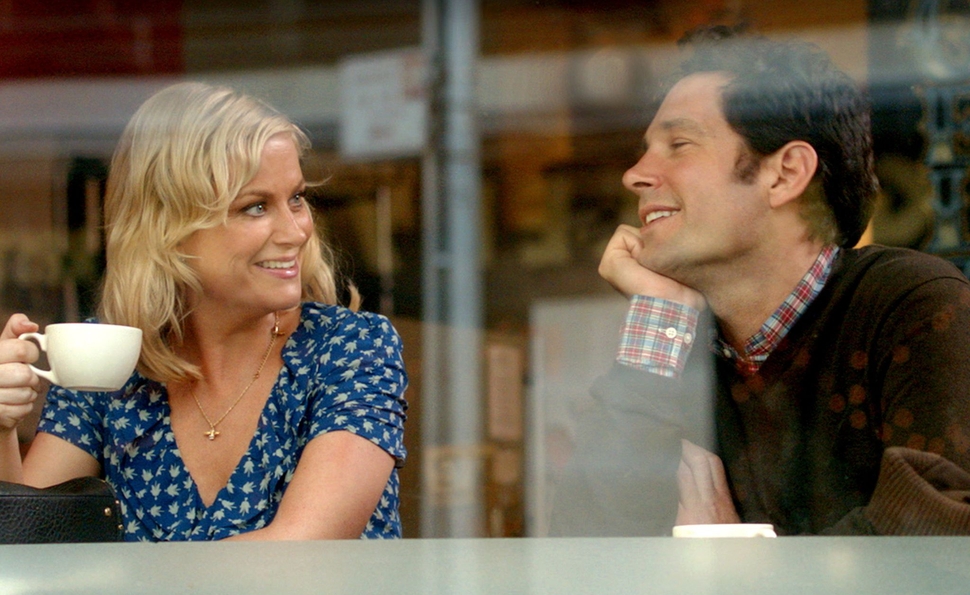 Formula breeds satire, and few things are more formulaic than the modern Hollywood romantic comedy. And few comedic teams are better suited to nurturing satire within that breeding ground than David Wain and Michael Showalter, whose camp-movie spoof Wet Hot American Summer has become a cult-comedy touchstone in the years since it flopped at the box office in 2001. Factor in a sprawling cast whose comedy-world cachet covers the spectrum from “beloved” to “adored,” and all the pieces seem to be in place for They Came Together to recapture Wet Hot’s magic, only without the lag-time in cultural consensus. And yet Wain and Showalter’s first feature-length re-teaming since Wet Hot (Wain directed from a script he co-wrote with Showalter) fails to hit the comedic heights promised by its pedigree. It’s reliably silly fun worthy of the people involved, but it never reaches the level of “inspired.”

Part of the problem stems from the fact that there’s just so much to mock within the rom-com genre that the film gets bogged down in nailing all the specifics, focusing so much on holding up ridiculous clichés that it forgets to say much that’s funny or original about them. They Came Together hits all the expected rom-com beats—a hate-to-love-back-to-hate-back-to-love romantic progression, a seemingly endless series of awkwardness-inviting social gatherings, a backslide involving a despicable ex, a big public reconciliation—plus a few extra beats that seem based more on perception of romantic comedies than specific examples of the form.

The two most recognizable genre pillars propping up They Came Together are When Harry Met Sally and You’ve Got Mail, but the movie draws liberally from the space on the Venn diagram where “romance” and “comedy” intersect. Using a framing device of couples sharing their “how-we-met story,” They Came Together states its intentions forthrightly, beginning with Molly (Amy Poehler) and Joel (Paul Rudd) insisting to their dining companions (Bill Hader and Ellie Kemper) that their love story is the stuff rom-coms are made of. And sure enough, their joint flashback bears this out: She’s a quirky, clumsy proprietor of a whimsical little candy shop that’s more interested in earning children’s smiles than money, and he works for a big, corporate candy company that’s setting up shop across the street. (The idea of a multimillion-dollar, big-box candy company might be a little more absurd if the You’ve Got Mail analogue it’s spoofing, the mega-bookstore, hadn’t since been rendered an improbable anachronism by the fickleness of time and consumer taste.) They meet at a Halloween party thrown by mutual friends and immediately despise each other, until another chance meeting reveals their mutual love of “fiction books,” and inspires them to give each other another chance. A series of misunderstandings and missed connections ensues, leading to a big, would-be dramatic reconciliation—“would-be” because the script blatantly, purposefully teases it on Molly and Joel’s first date.

The You’ve Got Mail-referencing setup ends up being a narrative onus the script is happy to shrug off for long stretches at a time. That move toes the line between comedic choice and lazy writing. After the initial setup, Joel and Molly’s candy-shop schism is only mentioned in passing until a late-movie scene that pulls it back to the fore to help nudge the story toward a conclusion after getting sidetracked in a series of sketch-comedy-inspired riffs; it’s an unwieldy framing device within another unwieldy framing device (the couples’ dinner conversation), and the unwieldiness becomes part of the joke. Likewise, They Came Together’s smartest deconstructions come in moments that play with rom-coms’ cookie-cutter structure, as in that foreshadowing of the big climax, or a recurring gag where minor characters are introduced for a single scene without explanation or backstory (including Molly’s out-of-the-blue son), just so they can be trotted back out for the big finale. By contrast, tell-don’t-show gags like Joel’s group of guy friends explaining how he’s the perfect combination of all their one-dimensional personalities come off as self-consciously heavy-handed.

However, as expected with this cast—which includes Jason Mantzoukas, Cobie Smulders, Christopher Meloni, Melanie Lynskey, Ed Helms, Michael Ian Black, Jack McBrayer, Ken Marino, and pretty much every other name on a comedy nerd’s wishlist—performance and charisma excuse a lot. Sure, when Molly explains in voiceover that she’s a klutz, it doesn’t take a psychic to figure out what’ll happen next, but Poehler can sell the hell out of a pratfall, so the easy gag is not only forgivable, it’s welcome for the chance it offers to see her find new and inventive ways to bang into things. And Max Greenfield deserves a special commendation for his work as Joel’s little brother Jake; his duties consist primarily of earnestly averring that Joel is the best big brother ever, but Greenfield’s over-the-top goopy sincerity is a joy to behold, especially playing off of Rudd’s hammy nice-guy charisma. Rudd and Poehler, for their part, come off like old pals goofing around, which is a great environment for riffin’ bits, but not necessarily for evoking romantic chemistry. Then again, there are plenty of rom-coms out there with chemistry-free leads, so this could just be chalked up to meta commentary. Yeah, that’s probably it.

Ultimately, the rom-com may have been too easy a target for Wain and Showalter; They Came Together’s premise provides so many easy avenues toward a laugh, there’s little need to break a sweat being audacious or subversive; why explore comedic detours when you can drive straight down the middle? And when subversive elements do appear—as in a clunker of an intergenerational-incest joke—they seem to clash with the good-natured, barely R-rated silliness that constitutes the film’s overarching comedic tone. There are a lot of laughs in They Came Together, but few curveballs. The biggest surprise is that the film feels so safe.