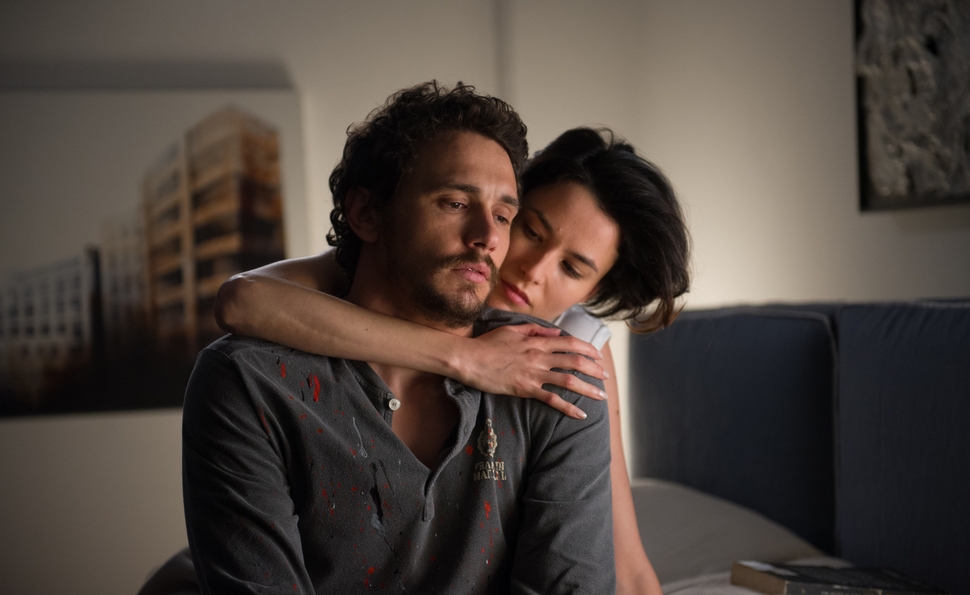 There are a few subtle clues throughout Paul Haggis’ Third Person that not everything is as it appears to be. A note hastily scrawled on a notepad in a New York hotel is picked up by a character seemingly in the same hotel—even though it’s already been established that her hotel is in Paris. Flowers left in Paris are found in New York. A motorcycle rider, a car passenger, and a painting all seem to have similarly blurred international boundaries. The film takes these magical occurrences at face value, without comment, such that it’s easy to miss the geographical discrepancies—or lose track of the storyline while trying to figure out what they mean. Haggis tips the audience off that something is going on. But he doesn’t let them any further in until the final moments, which seem guaranteed to send people away furious, astonished, or just plain confused.

In that sense, Third Person feels like an overly lengthy shaggy-dog joke with a worthwhile build-up and a questionable payoff. Much like Haggis’ racism-in-L.A. Best Picture-winner Crash, Third Person presents itself as an everything-is-connected movie in the Short Cuts or Amores Perros vein, with different stories taking place in different places, all linked by a thin connective thread. Famous author Michael (Liam Neeson) anchors one story from his luxurious Paris hotel, where he’s abandoned his wife Elaine (Kim Basinger) to frolic with his lover/protégé Anna (Olivia Wilde) while he works on his newest novel. Meanwhile, in Rome, sleazy American corporate spy Sean (Adrien Brody) meets mournful young Romanian mother Monika (Moran Atias), and gets involved in her attempts to buy her 8-year-old daughter back from the thug who’s smuggled her into the country. And in New York City, lawyer Theresa (Maria Bello) is exasperated with her irresponsible client Julia (Mila Kunis), who keeps botching important stages in her attempt to gain access to her son, who’s living with her rich artist ex-husband Rick (James Franco) and his lover Sam (Loan Chabanol).

The thematic link between all of Third Person’s sparring couples is the question of trust, especially when a key third person enters the mix. Michael and Anna’s relationship is 90 percent cruel, heartless sparring and 10 percent sex. Even before Anna’s other lover arrives to muddy the waters, their aggression with each other is painful, exaggerated past belief, but still compelling. They’re like screwball characters, playing with each other via fast banter and comic put-downs, except that they both seem on the edge of real malice much of the time, and neither one wants to drop the façade enough to show any weakness or vulnerability. Sean is far more willing to expose his vulnerabilities (and his open sexual interest) to Monika, but they’re driven apart by the man holding her daughter, who keeps upping his payoff demand, sensing Sean is a fat American sheep he can fleece. And Julia and Rick’s profound tension over Sam culminates in a brutal betrayal of trust—one inspired by an earlier, equally brutal one. The connections between these characters are are sometimes ludicrously melodramatic and overcalculated, but they’re at least drawn with a strong sense for the many ways people who make emotional commitments can get rapidly pulled far past their comfort zones.

Third Person’s considerable strengths generally come from the actors. Brody and Atias’ work is particularly strong and subtle, which becomes necessary as they fight to overcome the clumsiest and most contrived plotline. Their story never fully makes sense; it starts with him rushing to get some illicitly acquired designs to an American sweatshop, then bogs down as he seems to relax into a foreign city he loathes, without any sense of deadline or urgency. They even maintain some integrity when their story abruptly veers into territory that strains even the most flexible sense of disbelief. Neeson is his usual warm, sad, father-with-a-touch-of-menace self, and he and Wilde bring a real edge to their relationship, suggesting they can’t be together or apart without damaging each other. Kunis walks a particularly narrow tightrope, bringing across the emotional upset of a troubled mother who earns sympathy for her separation from her son, while simultaneously suggesting that it’s just as well she’s being kept from him, for his sake.

But all of the stories feel underserved, by their necessary brevity, by the sense throughout that Haggis is withholding some big reveals, and by the sense that none of these stories are really connected, past the shared high-concept logline. (They are. Again: exasperating.) There’s a prevailing sense that any of the three plotlines would have been stronger on its own, with more focus on who these characters are outside their self-defeating relationships, and without the distractions and heavy-handed repetition of covering the same thematic ground over and over.

And when the reveals do come, they’re all so exasperating that the last 10 minutes of the movie feels like a cackling blow-off to the audience rather than a resolution. As with Crash, the individual stories bring a great deal of passion and pain to the table, but the crossovers turn the entire thing into an exercise in empty, wallowing bathos. Haggis had the seeds of at least two, maybe three emotionally effective films in this project. He settled for one that sells out the potential of all three.