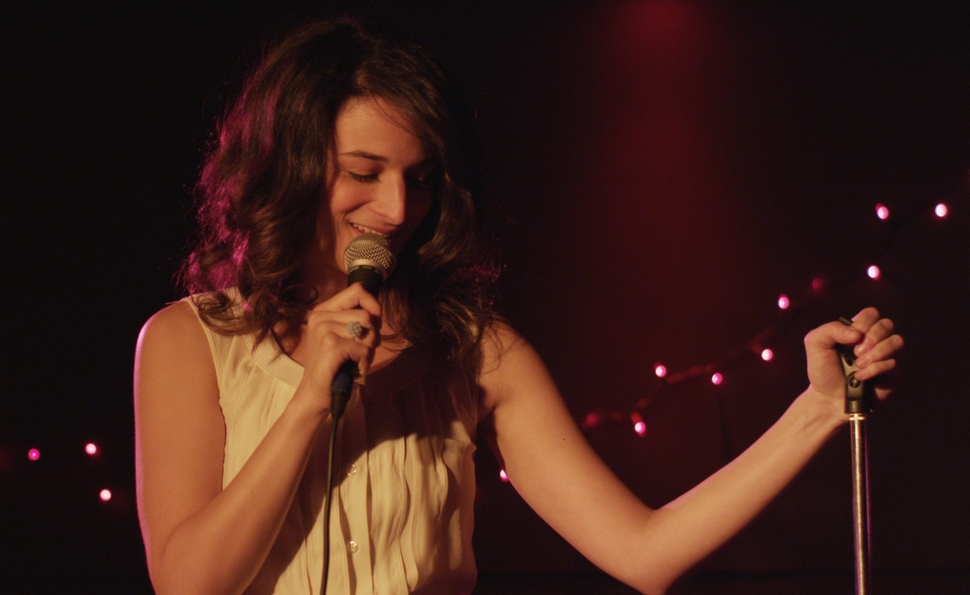 Romantic comedies generally resist edginess. The genre favors the sort of dull roundedness and easily digestible platitudes that ostensibly appeal to the target demographic’s so-called “delicate sensibilities.” So it’s understandable—and commendable—that the conversation surrounding Obvious Child since its Sundance debut has focused on the talking point at its center, which is nothing but sharp edges: abortion. But while Gillian Robespierre’s debut feature takes a refreshingly non-judgmental, pragmatic approach to what might be a hot-button issue in any other film, the abortion angle is ultimately an unconventional means to a relatively conventional end. Despite its attention-grabbing logline and gleeful embrace of raunchy, frequently scatological humor, Obvious Child is at heart a well-realized, straight-ahead rom-com, one with the potential to reinvigorate a genre that’s been flagging for decades.

Opening with a stand-up monologue seemingly designed to weed out those unfortunate souls in the “women can’t be funny” camp—the topics of lady-flatulence and panty-gunk are lobbed like bombs in quick succession—Obvious Child introduces its comedian protagonist, Donna Stern (Jenny Slate), as a woman more comfortable expressing, and exposing, herself onstage than off. She’s also comfortable exposing the sexual foibles of her current boyfriend, who, following her set, unceremoniously dumps her so he can date a mutual friend. Cue the downward spiral—requisite drunk-dial montage included—which is compounded when Donna discovers the bookstore where she’s worked for years (named Un-Oppressive, Non-Imperialist Bargain Books, a perfect representation of the film’s light Brooklyn-mocking tone) is closing, leaving her without the day job she needs to pursue her stand-up. Her emotional crash culminates in a mortifying drunken onstage bomb that leads her stumbling into the arms of a sweet but square WASP named Max (Jake Lacy), who endears himself to Donna when he accidentally farts while pissing next to her in an alley after closing time. Such is Obvious Child’s view of romance.

The fallout from Donna and Max’s ensuing one-night stand results in a trip to the clinic, where Donna learns she can’t get an abortion until she’s a little further along in her pregnancy, leaving her time to stew before her ultra-ironic—and rom-com-appropriate—Valentine’s Day procedure date. In this waiting period, Obvious Child really comes to life, as Donna turns to her friends (a wonderfully frank Gaby Hoffmann and Gabe Liedman, one of Slate’s real-life best friends), her family (Richard Kind as her doting, supportive dad, Polly Draper as her oppressively concerned mom), and especially her stand-up to work through her feelings about the pregnancy and whether to tell Max about it. Remarkably, Donna’s distress is never focused on whether getting an abortion is the right decision; that’s never questioned—in fact, two separate female characters tell her they’ve also had abortions, with no regret. Rather, the unplanned pregnancy highlights all the perceived failures in Donna’s life—romantic, financial, professional—that have brought her to a point where raising a child isn’t even remotely an option, even as she closes in on her 30th birthday. Hell, she can’t even afford the $500 fee to get the abortion.

In the midst of this personal crisis, Max reappears in Donna’s life, initially as an afterthought, then as an insinuating force—though thankfully, Obvious Child resists the stalking-as-romance trope familiar to rom-coms, painting the pair’s romance as a tentative dance rather than an impassioned pursuit. Max and Donna’s chemistry doesn’t spark or smolder, it pops off in little firecracker blasts that seem to startle them both, especially Donna, who scurries away into familiar, destructive patterns (embodied by David Cross, playing a slightly more successful but infinitely scuzzier fellow stand-up). The vanilla-straight-arrow-meets-brash-hipster pairing is an easy one,  perhaps too easy, but Lacy and Slate both bring enough distinction and quirk to their respective archetypes to make their attraction believable as more than a narrative function. Slate is especially revelatory: Her innate effervescence and braying laugh buoy Donna’s reflexive cynicism, and make her potty-mouthed sense of humor come across as a natural extension of her personality, rather than a “cute girl says dirty things” affectation.

Slate also played Donna in Robespierre’s 2009 short of the same name, and her comfort in the role is so palpable, it’s a little hard to believe Slate, an established comedic performer and writer, didn’t create the character herself. Credit for that goes to Robespierre and her co-writers, Karen Maine and Elisabeth Holm (all first-time feature filmmakers), though Slate’s realization of their work is Obvious Child’s beating heart. Robespierre keeps her camera tightly trained on Slate throughout the film’s fittingly slight running time, letting minute fluctuations in her lead’s expression project the emotions her brash dialogue futilely attempts to obscure. The stand-up sequences in particular are intimate bordering on uncomfortable, a fitting visual representation of an art form that often amounts to performative psychotherapy. Obvious Child is a relentlessly, unapologetically talky film, but watching Slate talk—to her audience, to her friends and family, to Max—is its own particular sort of pleasure. The outcome of Donna’s story, which follows standard rom-com beats, is never really in question, but watching her get to that pre-determined endpoint is uniquely satisfying.