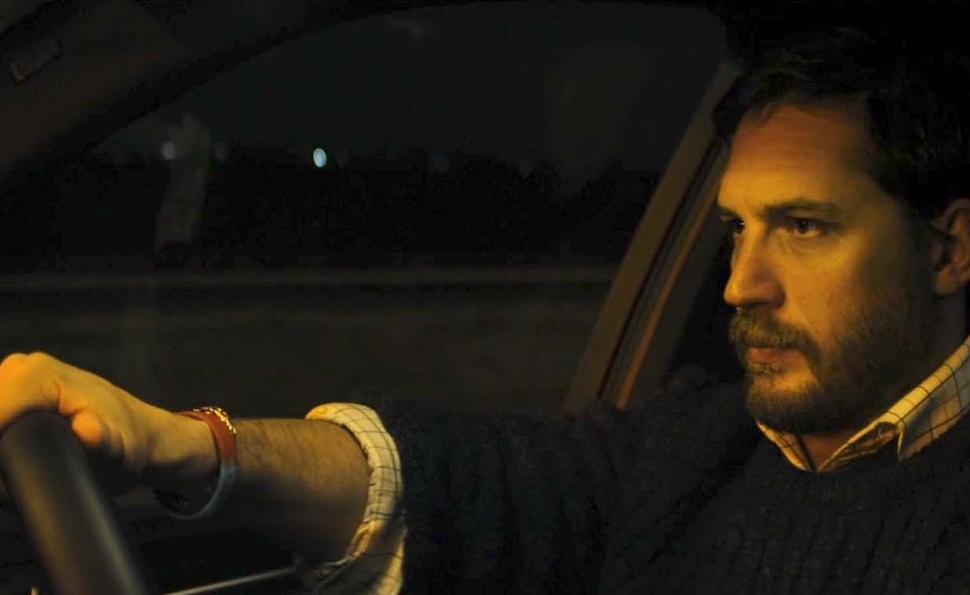 Steven Knight has made a career of placing sedentary people in crisis. Cinephiles may know him as an English screenwriter with a penchant for crime dramas about Europe’s underbelly (Dirty Pretty Things, Eastern Promises), but Knight’s real claim to fame—and certainly his claim to fortune—is that he created the original Who Wants To Be A Millionaire for British television. After making his directorial debut with 2013’s unusually sober Jason Statham vehicle Redemption, Knight has written the perfect vehicle for himself in Locke: a taut, stomach-turning morality play on wheels about a man sitting in the ultimate hot seat, slowly exhausting his lifelines until he’s utterly alone.

Ivan Locke (Tom Hardy) is having the worst night of his life. A wealthy construction manager who’s imminently scheduled to oversee the largest corporate concrete pour in Europe’s history, Locke begins the film by hopping into the driver’s seat of his bulky BMW—less a car than a mobile fortress—and driving away from the job. His wife is at home with their teenage son, who’s glued to the football match airing on television that evening, and expecting his dad to come home at any minute.

But Locke isn’t driving home. Instead, the seemingly unflappable man is cruising along the M5 motorway toward London, where a hospitalized older woman he hardly knows is in labor with his child. For the next 85 minutes, which unfold almost in real time, and entirely within the claustrophobic interior of his SUV, Locke confronts his greatest mistake, a reckoning that will jeopardize his personal and professional lives and force him to grapple with the hereditary baggage that has always been waiting for him in the rearview mirror.

A simple premise that’s unpacked with the patience and poise of a master, Locke is an effective cross between Gravity and Abbas Kiarostami’s Ten. It’s a broad, contained work of suspense that takes advantage of the car as a unique hybrid between public and private space.

Knight’s central gambit, and what separates Locke from other single-location thrillers like Rodrigo Cortés’ comparatively asinine Buried, is that this film begins after the protagonist has already made the decision that will determine his fate. Locke is a bastard himself, and his upbringing has convinced him that there’s nothing worse a man can be. (It’s no accident that his boss is listed as “bastard” in his phone’s contacts.) Locke has committed to being present for the birth of his bastard child, and Knight’s script never doubts the integrity of that commitment, nor violates it by contriving to raise the stakes. Locke repeatedly tells the voices on the other end of the line that he “doesn’t have a choice,” when the truth is that he’s simply made it already. As a result, the film is essentially a war of attrition between emotion and pragmatism, the rare thriller fueled by stress rather than speed. Locke’s self-actualized calm erodes over the course of the film, but he never exceeds 80 kmh.

Knight’s film is an ode to the unique anxiety of being behind the wheel of a car, and Hardy’s performance, his best since Bronson, is acutely attuned to how driving on a modern motorway inspires a rare sense of control, then guts it by hemming drivers in between narrow lines of road, paint, and one-way traffic. Hardy carries the entire film on his shoulders with seeming ease, creating a clear hierarchy of Locke’s agendas, the slightest modulations of his voice articulating a lucid shorthand of Locke’s entire life.

Rocking a novelist’s beard and a needless Welsh accent that makes his voice sound like Mrs. Doubtfire being filtered through the Bane mask, Hardy imbues the phone calls with a gripping immediacy, while at the same time managing to make it feel as though Locke is hopelessly cut off from the world beyond his car windows. Knight often shoots Hardy head-on, the halogen headlights of oncoming traffic washing across his face like the earth reflecting off the helmet of an astronaut in orbit. His performance isn’t just grounded, it’s practically sinking into the driver’s seat. Hardy’s presence is so urgent and comprehensive that he manages to deliver clumsy metaphors (i.e. equating his infidelity to the cracks in a batch of bad concrete at the base of an otherwise-solid building) as if they’re carefully premeditated nuggets of self-rationalization that he’s been rehearsing in his head for months.

Then again, Locke wouldn’t be much of a movie if its protagonist were able to maintain that kind of control. Knight’s script is a harrowingly focused portrayal of a man at risk of being defined by his greatest mistake (“The difference between once and never is the difference between good and bad”), but it falters when it reaches beyond Locke’s actions to investigate his lineage. After discretely chugging cold medicine for much of the film’s first half, Locke eventually begins to rage at his empty backseat, in a one-sided conversation with his dead, deadbeat father. Mercifully, Knight stops short of affording that dark passenger a body or a voice, but the device always feels like exactly that. It’s clear that the thread was intended to compliment the film’s genuinely curious inquiry regarding whether a man’s quality is determined by action or intent, but in practice, it plays as a labored, dramatically unsatisfying substitute for exposition, Locke all but telling viewers that he doesn’t want to be a father like his father.

Nevertheless, Locke is kept on course by Knight’s commitment to this moving story’s most pedestrian elements, pulling more effective drama from a smooth ride than most movies can muster from a dozen pile-ups. As constrictive as the movie gets, it gets there organically, with Knight cutting with purpose between a limited grab bag of close-ups and medium shots, drizzling his images with artificial affects as the tension mounts. Eventually, the highway is completely superimposed over Hardy’s face, conflating the road with the man driving on it until it’s no longer clear where he’s going, or who he might be when he gets there.