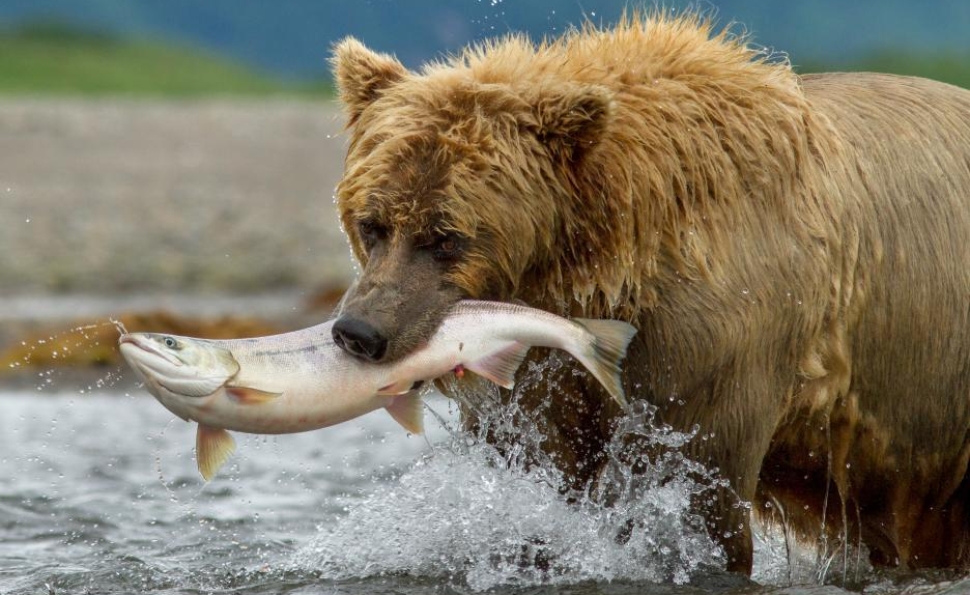 Don’t fault Bears for false advertising. Virtually every frame of the DisneyNature production contains at least one of the titular creatures, doing what bears do: wandering, sniffing, eating, occasionally fighting, at one point getting slapped in the face by a leaping salmon. Luckily, they’re naturally compelling creatures, physically expressive in a way few wild animals are, and as terrifying in their strength and ferocity as they are adorable in their cuddly-wuddlyness. If Bears spent the entirety of its runtime just watching its subjects amble about the Alaskan wilderness, well, there are worse ways to spend 77 minutes. But because this is a DisneyNature production aimed at children who may not appreciate the majestic monotony of bearhood, and because the life of the average bear is pretty lacking in terms of conflict, escalation, and resolution, Bears affixes an anthropomorphized narrative to its breathtaking nature photography, doled out via voiceover narration from an appropriately ursine-sounding John C. Reilly.

Bears follows a year in the life of Sky, a grizzly bear, and her two cubs, Scout and Amber, as they trek the gloriously photogenic confines of Alaska’s 4-million-acre Katmai National Park in search of enough sustenance to see them through the next winter. It’s a literal life-or-death scenario—Reilly points out early on that half of all bear cubs don’t survive their first year—given a Disney-friendly buffing, complete with villains (a couple of aggressive male bears and a lurking wolf, all hungry and looking for a cub-shaped snack), a helpful interspecies ally (a raven whose symbiotic relationship with the bears helps point Sky toward food), and comedic setpieces.

Co-directors Alastair Fothergill (responsible for the nature-documentary touchstones The Blue Planet and Planet Earth) and Keith Scholey (who co-directed DisneyNature’s African Cats with Fothergill) stitch together this narrative from hours of beautifully photographed, thrillingly immediate footage of the bears, and the seams show. Bears indulges in its share of emotional manipulation, like a blatant fake-out involving a temporarily missing Scout, or the exaggeration of Sky’s hunger in the moments leading up to her discovery of the “Golden Pond,” where untold numbers of salmon provide a veritable bear buffet. But such machinations are forgivable in light of Bears’ frankness about the constant struggle of life in the wild, even in a protected national park. The narration anthropomorphizes the bears to the point that they become characters with their own personalities—headstrong Scout, mama’s girl Amber, exasperated-but-loving Sky—but it’s thankfully kept within the natural, unembellished context of how bears actually behave in the wild. There’s no deceit in the film’s attempts to entertain.

And entertain it does. Reilly is a tremendous asset to Bears; his avuncular presence goes a long way toward redeeming cheesy comedic beats, like his razzing of a male bear who has “no game” when pursuing a female, or the quip that a particularly lazy specimen “looks like my dad when he’s watching TV.” (Imagine Morgan Freeman selling that line. It just doesn’t work.) These comedic interjections come off as less intrusive than they could have, thanks to Reilly’s unforced, affectionate delivery, which pairs well with the bears’ lumbering charisma. They’re natural clowns, the cubs in particular, and it’s easy to forget—or at least overlook—their killer instinct when they’re riding on, and falling off, their mama’s back, or getting a claw stuck in a difficult-to-crack clamshell. Those visuals don’t need Reilly putting words in the bears’ mouth, but his sweetly flustered narration of the cubs’ fumblings and bumblings is so winning, it’s hard to fault Bears for gilding the lily.

But through all its adornments—the narration, the punched-up foley, the sweeping orchestral accompaniment—Bears keeps the emphasis on its spectacular visuals, from widescreen aerial vistas of Alaskan mountains to claustrophobic close-ups of bears huddled in their dens to slow-motion claw-to-claw combat. Bears as a species have been so familiarized and normalized to humans—through toys, pop culture, and animated GIFs—that it’s thrilling to see them just being bears in their natural environment, on a scale suited to their size and presence. True to its Disney lineage, Bears is a theme-park version of reality, but one built on sincere understanding of and affection for the natural world and all its creatures—especially the really cute ones.