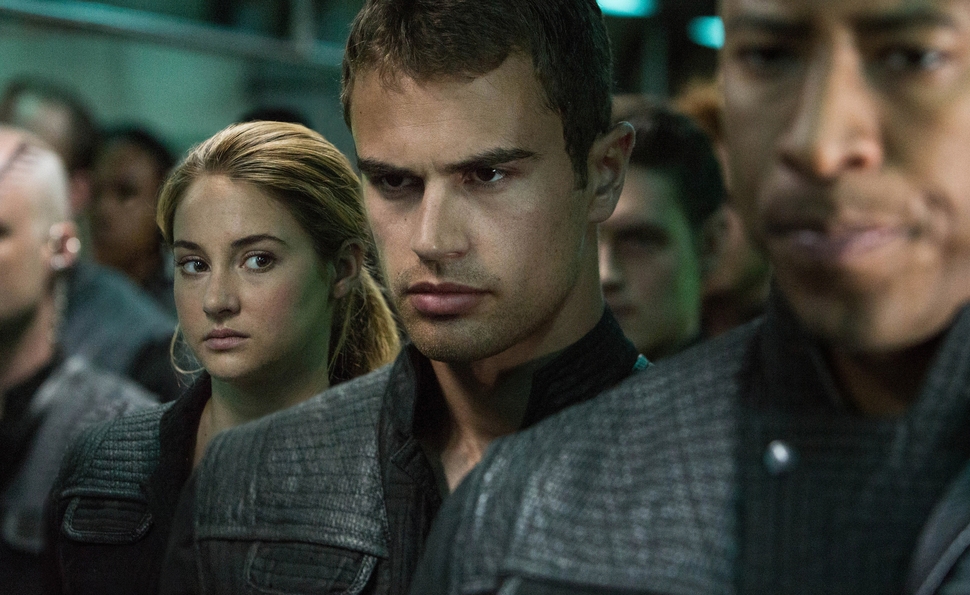 The seemingly inexhaustible young-adult-novel-adaptation trend has been plagued by movies that are so committed to giving these properties’ built-in fan bases what they want, they often neglect to look or act like movies anyone but those fans would want to see. The Twilight franchise is the bellwether of the phenomenon, but even the best of the bunch—the later Harry Potter films, the recent Hunger Games sequel Catching Fire—tend to be weighed down by their slavish dedication to fan service and faithfulness to the source texts. Divergent is no different in that regard—the fans who made Veronica Roth’s book series a bestselling phenomenon should be appeased by this point-by-point story adaptation—but it also displays an admirable commitment to looking and feeling like an actual movie, one that might appeal to audiences who have never read Roth’s books. Director Neil Burger (The Illusionist, Limitless) brings visual style, well-realized action, and skillful performances to source material that probably didn’t need any of those things to be financially successful. Unfortunately, that source material proves to be the film’s undoing, as Divergent is built on a shaky premise that collapses when blown up to big-screen proportions.

Divergent takes place in that favorite setting of storytellers looking to make allegorical statements about How We Live Now: a dystopian near-future. Laid out, as these things must be, via opening voiceover narration, Divergent’s world is built on the ruins of Chicago, which no longer borders Lake Michigan, but rather a vast swampland separated from the city by a towering wall, erected by someone, at some point in the past, to keep out something. It’s never clear what threat exists on the other side of the wall; what is explained, over and over, is that this future society is built on a system of factions in which all citizens must dedicate themselves one of five established values/lifestyles: Abnegation, dedicated to selflessness; Erudite, dedicated to acquiring knowledge; Dauntless, dedicated to bravery; Amity, dedicated to kindness; and Candor, dedicated to honesty. Anyone not conforming to one of the five become the untouchable caste of this society—the cleverly named “factionless”—living without purpose or protection.

Divergent’s heroine, Tris (Shailene Woodley), lives in fear of becoming factionless when she learns, via mandatory testing that determines optimal faction placement, that she is Divergent, displaying qualities of multiple factions. Warned by her tester that this is rare and extremely dangerous, Tris is pushed to hide her condition and just conform to a faction, any faction. She chooses Dauntless, the soldier class, whose members spend their days performing feats of bravery, wearing cool black clothes, getting tattooed, and running everywhere they go. She keeps her Divergence secret throughout her physical training—which involves lots of hand-to-hand combat, weaponry, and jumping or dangling from great heights—but it becomes harder to hide when she has to enter chemically induced “fear landscapes,” which her condition lets her manipulate. Her unusual aptitude catches the attention of her aloof yet hunky trainer, Four (Theo James), who becomes her protector (and love interest) when it becomes apparent that Divergents are being targeted by another faction for the threat they pose to a brewing inter-faction war.

That war and the motivations behind it is where Divergent’s fragile conceptual foundation crumbles completely, inviting a host of questions that reveal the nonsensicalness of a world and plot that function only to the extent that they support the film’s bold, underlined, highlighted thesis statements: Conformity is dangerous, individuality is important, and no one person is just one thing. (In case that last one isn’t apparent, Tris repeatedly states that she doesn’t want to be just one thing.) It’s clear why those themes have resonated with the series’ fans, but they don’t add up to any sort of satisfying internal logic. Kate Winslet, as the Erudite leader Jeanine Matthews, is required to wander onscreen every 20 minutes or so to re-explain the rules of this society, why it ostensibly works, and the threat posed by those who don’t embrace the system. Winslet is an authoritative enough presence that it’s almost possible to buy this nonsense as it’s coming out of her mouth, but any sense of coherence or logic is purely incidental, and quickly fades.

But when Divergent stops scrambling to justify its premise and just lives in it, for better or worse, its assets become more apparent. Woodley is the standout of a cast that treats this material better than it deserves: She manages to sell emotional beats that are telegraphed from miles away, finds a nice balance between hesitance and gung-ho badassery in her action-hero moments, and develops a believable chemistry with James. Burger’s direction also brings some coherence to a vision that desperately needs it, through well-choreographed action scenes and a nicely specific vision of post-disaster Chicago that balances grimy utilitarianism with moments of much-needed grandeur, as when Tris and her Dauntless brethren zipline off the top of the Hancock Tower, soaring over and through the ruined city. At 140 minutes, Divergent is too bloated to be consistently exciting, but it’s relatively agile between its many exposition-dumps, at times resembling an actual action movie more than a pro-forma adaptation. It aims for “good” rather than “good enough,” and as a result, occasionally hits the mark.