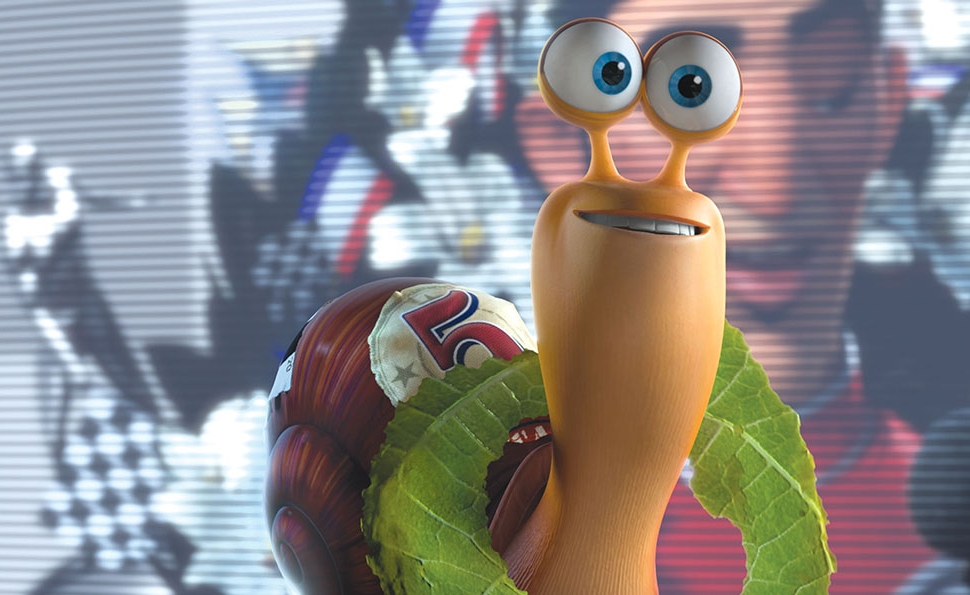 A movie with a logline like Turbo’s—speed-obsessed garden snail aspires to race in the Indy 500—is going to have to hit certain expected story beats to make such a high-concept premise work. The snail is going to have to have a life-altering experience that confirms his chosen-one status and fuels his ambition. He’s going to have to somehow team up with a human with whom he shares a nonverbal bond and who serves as his ambassador to the larger world, à la Ratatouille. There have to be naysayers continually reminding him that he’s a snail, and therefore his dream is too big to suit his stature. There has to be a makeshift family that rallies around the plucky mollusk to help him achieve his dream in the face of insurmountable odds. (In Turbo’s case, there are two.) And, most importantly, there has to be a dastardly villain who personifies those insurmountable odds.

Turbo hits these beats with the regularity of a metronome, but the character notes layered on top of those beats makes it the most enjoyable, affecting DreamWorks Animation outing since How To Train Your Dragon. Following the familiar “No dream is too big, no dreamer too small” narrative that fuels so many movies targeted toward children, Turbo tracks the impossible dream of Turbo (née Theo, voiced with bland competence by Ryan Reynolds), a snail who spends his days toiling in a suburban garden alongside his safety-obsessed brother Chet (Paul Giamatti in fine, spluttering form), oh-so-slowly harvesting overripe tomatoes to feed their snail community. But he spends his nights watching stock-car racing on TV, sucking down racer-endorsed energy drinks, and trying to beat his own speed record of a 15-minute yard, drawing his peers’ mockery and his brother’s concern. Through a series of freak contrivances—most prominently among them, getting sucked into the engine of a souped-up drag racer, fusing his DNA with speed-boosting nitrous oxide—Turbo ends up possessed of super-speed and out in the big, human world. He and Chet are picked up by a taco-stand employee and snail-racing enthusiast named Tito (Michael Peña), who shares Turbo’s propensity for dreaming big, and his burden of a spoilsport brother. Along with the multiculti proprietors of the Starlight Plaza, an economically struggling shopping center looking for just the sort of publicity a mutant racing snail would bring, Tito and Turbo conspire to enter the Indy 500, a decision that somehow makes sense in the context of a world where snail races are the recreation of choice among the Starlight Plaza employees.

While Turbo’s kinetic, 3-D-assisted racing sequences are thrilling, particularly when viewed from Turbo’s perspective, the film finds its heart in the parallel fraternal relationships of Turbo and Chet and Tito and his brother (Luis Guzmán), as well as the parallel found-family stories of the Starlight Plaza gang and the crew of souped-up racing snails they’ve adopted. This snail crew—headed up by Whiplash (Samuel L. Jackson) and including Smoove Move (Snoop Dogg), Burn (Maya Rudolph), Skid Mark (Ben Schwartz), and White Shadow (Mike Bell)—seem conspicuously merchandising-friendly, what with their collect-them-all series of personalized shells that evoke Fast And Furious-style street-racers. But they’re essential components of the snappy, unexpected humor that makes Turbo such a breezy ride. (In particular, White Shadow’s ridiculous nom de racing makes for one of the movie’s best recurring gags.) And while there’s never any doubt that Turbo’s racing idol, the conspicuously haughty IndyCar racer Guy Gagné (a perfectly smarmy Bill Hader), will turn out to be the most formidable obstacle between him and achieving his dream, Guy’s inevitable betrayal stings especially hard by contrast with the dogged optimism displayed by Turbo’s two adopted families, and in the way it echoes Chet’s lack of faith in his brother.

Turbo gracefully navigates its lumbering structure, selling the contrivances that drive the story forward via sharply realized dialogue, zippy action sequences, and smart use of compression. (A particularly delightful road-trip sequence set to The Jackson 5’s “Goin’ Back To Indiana” serves as both training and family-bonding montage.) And while parents in the audience may smirk knowingly at blatantly foreshadowing lines like “What if you wake up tomorrow and your powers are gone?”, such transparency is a small price to pay for the treat of Turbo’s action sequences, which make deft use of 3-D and bullet-time to sell the thrill of racing as something bigger than, as Chet snarkily describes it, “Left turn… left turn… ooh, another left turn!” There’s nothing remotely revolutionary about Turbo’s underdog-sports narrative, but that’s okay—it’s one of the sturdiest plots in film for a reason—and the film’s emotional beats are no less potent for being expected, thanks to the ground-level focus on the human-snail relationships that fuel them.