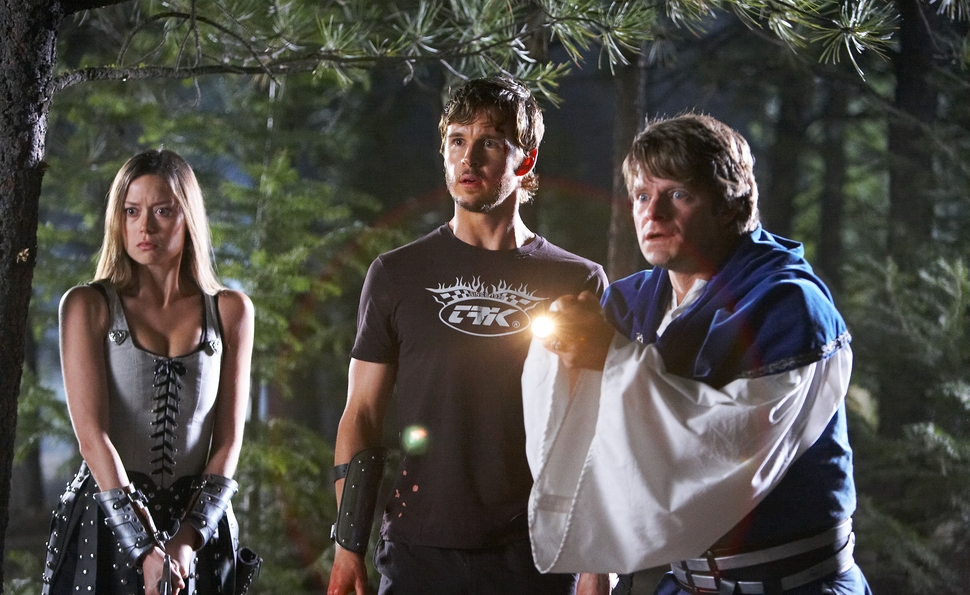 How to rate a movie that aims low and hits the mark? Should it be damned for its lack of ambition, or celebrated for what it is? In many cases, it comes down to goodwill. Are the movie’s modest goals a product of simple laziness, or amiable humility?

Knights Of Badassdom feels like the latter. The story of a group of LARPers (live-action role-playing, for the ComicCon-impaired) who face off against a real-life demon isn’t out to change the world, or even make much of a dent, but then neither are the people it’s about. Joe (Ryan Kwanten) seems pretty happy working at a garage, living in a room in the castle owned by his accidental-millionaire buddy Eric (Steve Zahn) and jamming in a black-metal band—sorry, formerly black-metal, previously sludge, now doom-metal. So it’s a major bummer when his high-school girlfriend Beth (Margarita Levieva) decides she needs to date someone who knows where his life is headed. Fortunately, Eric and his stoner buddy Hung (Peter Dinklage) have just to thing to cheer him up: a weekend in the woods with a bunch of like-minded geeks dressed in homemade costumes and wielding foam weaponry.

Although the LARPers remember the time Joe gave Ronny Kwok’s paladin demonic syphilis, he hasn’t kept up since his D&D days, and is skeptical of rejoining the fray, at least until he gets a glimpse of the “+3 ass” on Gwen (Summer Glau). Fortunately, apart from a tame close-up on Glau’s stats-inflating rear and a self-consciously gratuitous lesbian make-out scene, Chillerama director Joe Lynch is able to spoof geekdom’s sexism without indulging it, even though the demon that Eric’s wizard accidentally summons from a bonafide spell book does take the shape of Joe’s lingerie-clad ex.

Knights Of Badassdom builds many of its jokes around the distinction between when its characters are “in-game” and out: The pattern “Theatrically Heightened Statement Of Valor (sotto voce acknowledgement of mundane reality)” becomes awfully familiar after a while. There’s no way of knowing how much of the movie’s rhythmic monotony is the result of it being taken away from the director in editing; though Lynch won’t comment beyond the hashtag “#NotMyCut” and retweeting a writer’s disavowal of Knights’ jury-rigged epilogue, the movie’s 85 minutes feel both too short and too long, like an overgrown sketch or a hollowed-out story.

Perversely, Knights is only available for digital purchase, not rental, and critics weren’t provided with advance copies; the film was crippled by bad fan press surrounding the re-edit, and it’s as if rather than trying to nurse it back to life, the distributor has decided to put it out of its misery. But even while it’s apparently not what its creators intended, Knights Of Badassdom is perfectly enjoyable in a low-key way, with sharp performances—Jimmi Simpson is a particular delight as the formerly syphilitic Ronnie Kwok, now a slightly smug dungeon master—and a nigh-endless string of cameos from the likes of Joshua Malina, W. Earl Brown, Michael Gladis, and Danny Pudi. It has plenty of humorously over-the-top gore, and a knowing way around its subject, though its inside jokes are available to all. It’s hardly a masterpiece, but then, it shows no signs it ever wanted to be, and sometimes that’s a relief.