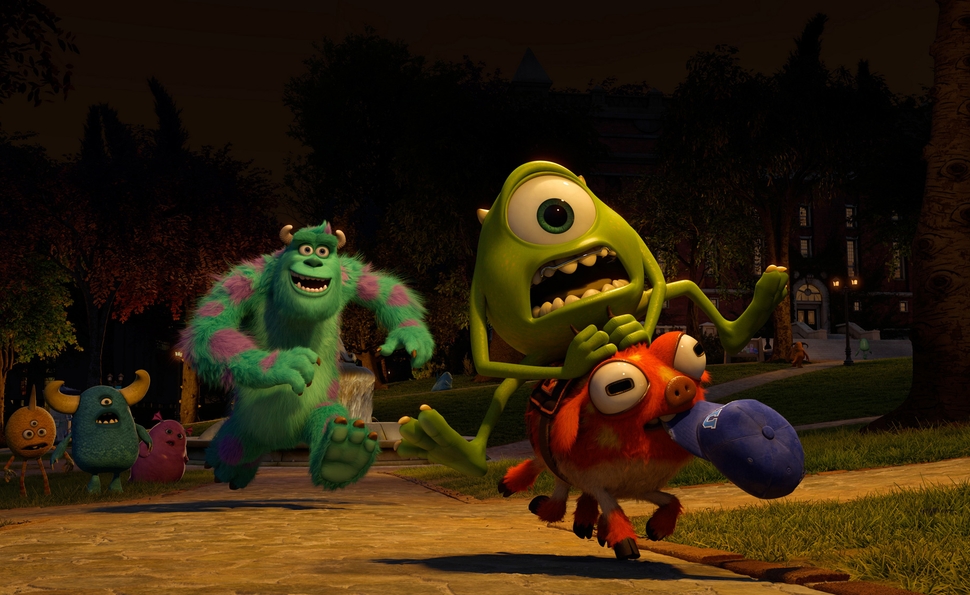 There’s nothing in Pixar’s prequel Monsters University to rival the joyous Looney Tunes energy of Monsters, Inc.’s world-of-doors sequence, or the powerfully sweet ending, but that isn’t entirely a bad thing. Where cinematic sequels, prequels, and spin-offs usually try to recapture the original’s formula, then pump up the size and intensity, Monsters University is distinctly its own movie, operating toward different goals. Instead of raising the stakes, first-time Pixar feature director Dan Scanlon and his co-writers (Monsters, Inc. veterans who also worked together on Cars) lower them, then look for the emotional resonance in their more sprawling story. And while the newer film is handicapped by having to set up Monsters, Inc., there’s still more conceptual tension in watching two raw, unsettled characters trying to build their own identities than there is in Monsters, Inc.’s story of happy, settled pals trying to get back to the status quo.

MU’s protagonists are completely different from the previously established versions, but they’re also entirely plausible college-aged iterations of the same individuals: young, naïve, idealistic, and certain they have their lives figured out. In Monsters, Inc., ambulatory green-skinned eyeball Mike Wazowski (Billy Crystal) is smug and stable in his job as support crew in a company that scares human children and harvests energy from their screams; in MU, he’s a wide-one-eyed dreamer, determined to become a “scarer” himself, and so devoted to this lifelong goal that he’s become a fussy academic grind. Blue-furred teddy bear James “Sulley” Sullivan (John Goodman), the warm-hearted soul of Monsters, Inc., is a smarmy, lazy jock, ready to coast through college on charm and the reputation of his famous scarer family. Taken together, Mike and Sulley are a snob-vs.-slob campus comedy all on their own.

Monsters University’s smartest conceit is the way the filmmakers turn it into a slob-plus-snob comedy by forcing Mike and Sulley to depend on each other in spite of their automatic enmity. They never go full-on Odd Couple, but their early mutual hatred provides plenty of fast-paced banter, and their unwilling cooperation forces them to assess each other over time organically. Their rivalry avoids the usual “slobs are good, snobs are bad” dynamic: They each have strengths and weaknesses, and forced exposure to each other lets them rethink their mistakes and reassess each other’s assets. The details of how they come to terms with each other, then come to enjoy their mutual dependance, are well-drawn and smartly realized. 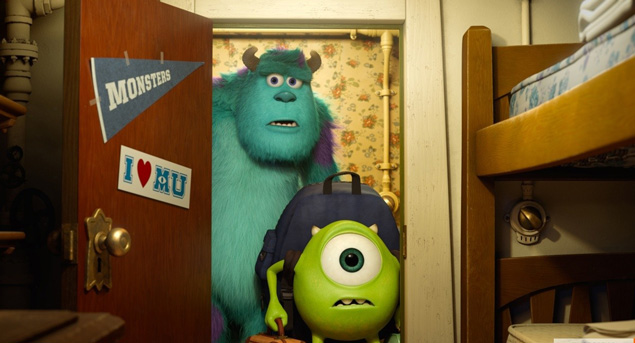 Still, their relationship is overshadowed by the film’s much larger, more standard snob/slob conflict. When a group of hapless, lovable losers (it’s a running joke that their frat, Oozma Kappa, anagrams as a middling “OK”) has to win a big school competition against an evil fraternity with a jerky jock leader (voiced by professional comedic lunk Nathan Fillion), the film becomes a standard underdog-sports-team story, with Mike as the coach whipping a bunch of unlikely dorks into shape. The competition revolves around entertaining, appropriately monstrous challenges like “avoid the multi-story tentacled librarian-beast that attacks anything noisy.” But it’s all hoary campus-comedy cliché, down to the cold, patrician Dean Hardscrabble (Helen Mirren) looking for excuses to kick the protagonists out of school. Given all the reliance on formula, the film doesn’t have many surprises, until the setup and the campus competition are over and a much more innovative third act begins.

Pixar’s strongest material always revolves around families, from the found-family dynamics of the Toy Story movies and Up to literal families with Finding Nemo, The Incredibles, Ratatouille, and Brave. Monsters, Inc. gets its best moments from Mike and Sulley’s comfortable, close partnership and Sulley’s deep feeling for a little human girl he accidentally adopts. Monsters University gets its own depth of feeling from the gradual bonding between Mike and Sulley, and the tremendous emotional payoffs as they finally start to work together. But where Monsters, Inc. was more Sulley’s story, with Mike as comic relief, MU is Mike’s story. It begins with his formative childhood trip to Monsters, Inc., where he first decides to become a scarer. It concerns itself more with his dreams and setbacks, and its final crisis and catharsis are largely his. That brings a solid sense of balance between the two movies, as they work best together to offer a richer picture of the two characters and their friendship.

But Mike’s story works primarily in relationship to the earlier film. It’s an adjunct rather than a stand-alone, and it presumes considerable knowledge of and affection for these characters. The prequel’s animation is brighter, more detailed, and more ambitious: Pixar has had a dozen years to innovate in its field since Monsters, Inc., and the monster world, already creatively detailed in the original, is now a glowing wonderland of jellybean colors, diverse characters, and playful sight gags. But apart from the minor shudders induced by the dean’s creepy-crawly bat-millipede design, MU doesn’t aim to be scary the way its predecessor did, and it lacks the heartstring-grabbing impact.

While the eventual rewards are considerable, they mostly come toward the end of the film, when MU momentarily sets all the extra characters aside and focuses solely on Mike and Sulley, and the kind of intense, meaningful relationship that usually matters to Pixar. Everyone who’s seen the first film knows what the prequel has to accomplish, and where it has to go, but that isn’t the issue: The problem is that it follows so many side paths to get there. It’s a strong look at the genesis of a satisfying partnership, but it could be stronger if it trusted that partnership to carry the story.

Note: Monsters University screens with a new Pixar short, “The Blue Umbrella,” a mini love story in which two umbrellas fall for each other, and an entire animate city conspires to get them together. Narratively, it’s disappointingly simplistic, and far too similar to Disney’s superior 2012 short “Paperman.” But the execution is remarkable: It’s a Pixar experiment in photorealistic animation, and it’s hard to believe there’s no live-action footage, given how well the visuals imitate film images of a dark, grubby, but secretly magical city in the rain. The fundamental idea that anything that looks remotely like a face is alive will probably have viewers looking at drainpipes and metal fixtures differently—and more appreciatively.