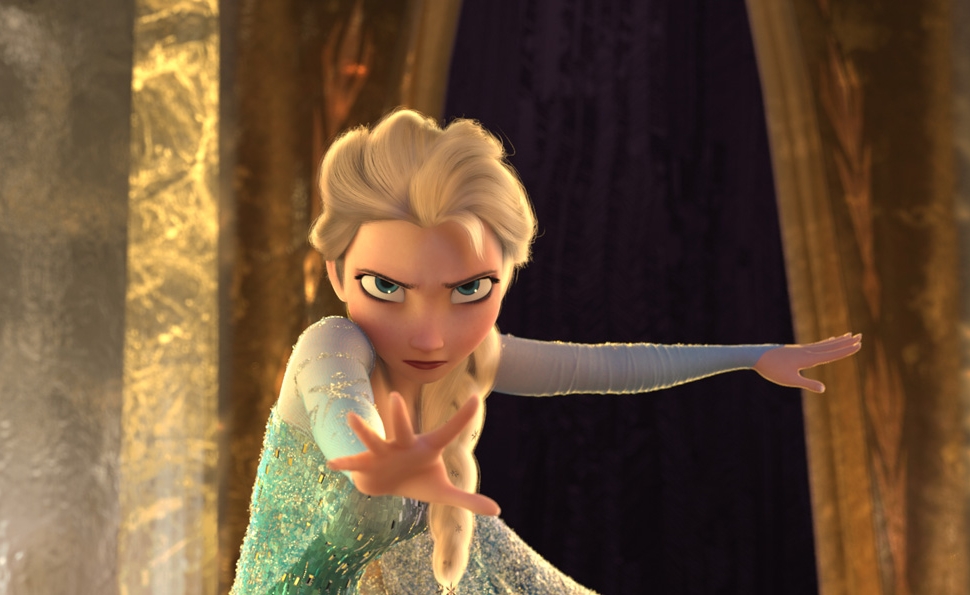 At this point, virtually every new animated feature from Walt Disney Studios feels like a conscious corrective for some past perceived failing. The Little Mermaid rescued Disney animation from the doldrums, Beauty And The Beast rescued it from a long series of stories about hapless damsels in distress, Aladdin rescued it from a long history of all-white protagonists. After that trifecta, many of Disney’s movies have been conceived around “firsts”: first black protagonist, first Asian protagonist, first Native American heroine, first Disney-handsome villain, first heroine who saves her prince instead of the other way around. While each new film has sparked its own share of complaints and controversies, at least there’s been a sense that the studio is actively looking to break new ground and escape past stereotypes. It also doesn’t hurt that the studio gets to leverage every new step into extra media attention by touting its newfound attention to inclusion, representation, and agency.

Frozen, for example, is the first Disney animated feature with a woman in one of the directors’ chairs, and perhaps not coincidentally, it’s the first that’s more concerned with a bond between sisters than with a hero-villain face-off, or a romantic relationship. Following closely in the footsteps of 2010’s Tangled, right down to the fraught family relationship, the character design, and the oversized quadruped who acts like a puppy, Frozen hits many of the same beats, and finds some of the same freshness in a complicated family dynamic.

Kristen Bell voices Anna, the younger of two princesses in a vaguely Norwegian northern kingdom. (The setting recalls Hans Christian Andersen’s “The Snow Queen,” the original source material for Frozen, though the final version of the film retains virtually nothing from his story.) As small children, Anna and her older, more serious sister Elsa (Broadway superstar Idina Menzel) are enthusiastic best friends, but as Elsa’s magical ability to create ice and snow grows out of control, their parents shut them away from the populace, both to hide Elsa’s power, and out of fear she might harm people—including Anna. Both girls grow up isolated, each suffering in different ways: Elsa lives in fear of herself and her abilities, while Anna no longer remembers Elsa has powers, and can’t stop mourning their lost closeness. At Elsa’s coming-of-age coronation, Anna meets the handsome prince Hans (Santino Fontana) and they fall for each other. Hearing about their engagement, Elsa gets emotional enough to lose control of her powers, and she flees into the frozen mountains. What follows from there is unique not just for Disney, but for American fairy-tale movies in general: an adventure without any obvious villain, and a big fantasy conflict that can seemingly be set right with one heartfelt conversation between entirely reasonable people who love each other and want what’s best for each other.

There’s much more to Frozen, involving a comedic talking snowman (Josh Gad), antisocial ice-cutter Kristoff (Jonathan Groff) and his dog-like reindeer partner, a huge family of trolls, and a bunch of big, beltable, Broadway-style songs. Much of it unfolds around story beats familiar from Tangled: Anna is just as isolated and overeager as Rapunzel, complete with the Disney-requisite song about her overwhelming desire to get out into the world. (See also: Tangled’s “When Will My Life Begin” and its many predecessors, from The Little Mermaid’s “Part Of Your World” to Hunchback Of Notre Dame’s “Out There.”) Kristoff is just as smug, capable, and reluctant to get involved with a hyper, naïve shut-in as Flynn Rider is in Tangled. Much of Frozen feels mighty familiar, right down to the character models: Young Anna is Vanellope from Wreck-It Ralph, facial tics and all, while teen Anna and Elsa are both Rapunzel with different hair. (As a lot of people have recently noticed, Disney’s CGI heroines pretty much have the same face.)

But the advantage to following Tangled’s lead is that director Chris Buck (Tarzan, Surf’s Up) and co-director Jennifer Lee (who gets sole screenplay credit, and also co-wrote Wreck-It Ralph) unfold the story with the lively pacing, banter, and carefully calibrated comedy/drama mix that made Tangled a hit. And the film does find fresh ground both in the Anna/Elsa relationship and in exploring how denial and repression have poisoned Elsa, whose mantra has become “Don’t feel—conceal.” When she finally lets herself open up for a moment, she gives the film its most powerful sequence with her joyous statement-of-purpose song “Let It Go.” It’s Frozen’s version of Menzel’s career-defining hit “Defying Gravity,” from her breakout role as Elphaba in Broadway’s Wicked.

With sequences like that on offer, it’s frustrating that so much of Frozen’s music is cute but unmemorable, saddled with clunky lyrics that sound like first drafts. (“Don’t know if I’m elated or gassy, but I’m somewhere in that zone / ’Cause for the first time in forever, I won’t be alone,” Anna sings, eagerly imagining the coronation ahead.) And after a chipper choral song from the trolls three-quarters of the way through the film, the songs dry up altogether. At its worst, Frozen feels clumsy, rote, or even pandering, in the case of that superfluous singing snowman, an adorable kid-pleaser with little story function except butt jokes and physical comedy. At its best, though, it breaks a little more new ground for Disney, escaping the yet-another-princess mode and finding new kinds of family dynamics to explore, and new ways to step outside the studio’s long-established boundaries.

Note: Frozen screens with a new Mickey Mouse short, “Get A Horse,” which shouldn’t be spoiled in any way for new viewers. Suffice to say it hearkens heavily back to Silly Symphony-era black-and-white Mickey Mouse cartoons, while making inventive, playful use of 3-D and modern digital animation. For what it’s worth, it was also directed by a woman—The Simpsons and Avatar: The Last Airbender veteran Lauren MacMullan—and Disney is billing her as the first solo female director on one of the studio’s projects.