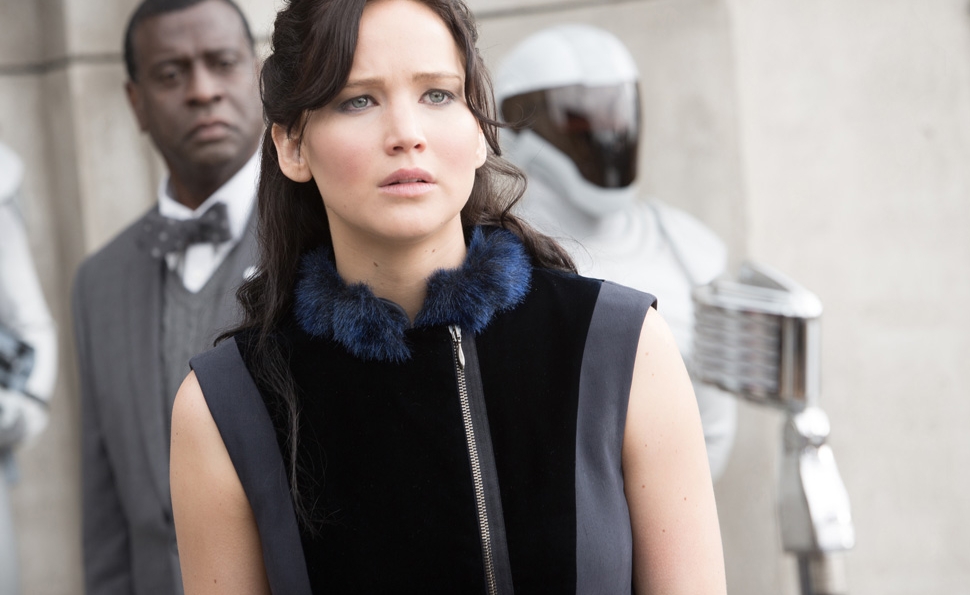 Blockbuster sequels can easily fall victim to the curse of “bigger but not better,”  by raising the stakes in ways that often undermine what made the original film work. Given that the stakes of the first Hunger Games movie involved children fighting to the death in a post-apocalyptic dystopia, the sequel would seem primed for just such an overshoot. But the second film in the mega-franchise, Catching Fire, not only succeeds in raising those stakes, it builds on its predecessor in a way that strengthens the foundation and lays the groundwork for the next level of the narrative, as laid out in Suzanne Collins’ bestselling young-adult book series. It’s a quintessential middle film, lacking both substantive setup and a satisfying conclusion—and it’s all the better for it, thriving in the tumultuous, incendiary stages of a brewing revolution.

That isn’t to say the nearly 150-minute film cuts to the chase. Like its predecessor, Catching Fire is divided almost evenly into preamble and main event, and that preamble has even more work to do this time around, justifying the events that conspire to bring the heroes of the last film, 74th Annual Hunger Games victors Katniss Everdeen (Jennifer Lawrence) and Peeta Mellark (Josh Hutcherson), back into the situation from which they improbably escaped last time. Picking up shortly after Katniss and Peeta’s victory at the Games, Catching Fire sends them off on a state-mandated “victory tour” that forces them to stare down the families and neighbors of their fallen fellow tributes in the midst of struggling with their own survivors’ guilt and PTSD. While touring the 12 districts of Panem—the would-be utopia that sprung from a post-apocalyptic North America—they see the seeds of rebellion they sowed when they gamed the Hunger Games taking hold in the disenfranchised populace, seeds the totalitarian Capitol attempts to uproot through increasingly hardline and violent means. Making good on the ominous final shot of the first film, Donald Sutherland’s President Snow returns as the soft-spoken face of the Capitol’s evil, threatening Katniss in no uncertain terms, and ordering her to play along with the bread-and-circuses ruse, or suffer the consequences. The consequences, it turns out, force her and Peeta to return to the hell they thought they’d escaped: another Hunger Games, this one a special 75th-anniversary edition that draws its tributes from the pool of existing victors, in a thinly veiled power move intended to show, in President Snow’s words, that “even the strongest cannot overcome the power of The Capitol.”

That’s a lot of work to get Katniss and Peeta back into a situation that could be viewed as a retread, were it not for the fact that the rebellion aspect both justifies the move and changes the dynamic of these Games significantly, and for the better. Catching Fire will hopefully help quiet those who decry The Hunger Games as nothing more than a Battle Royale ripoff, as it expands its focus well beyond the conceit of kids forced by the government to kill each other. It moves on to consider the sustainability of a system that engenders such execrable acts of entertainment—particularly when that system has also created a caste of celebrity victors who have benefitted from the system as much as they’ve suffered from it. The addition of previous, now-adult victors is a boon to Catching Fire, not only because it adds some welcome new faces to the already-sprawling cast—chief among them Jena Malone as the wickedly outspoken Johanna Mason and Sam Claflin as the roguish Finnick Odair—but also because it adds more texture and dynamism to a pool of competitors that previously came across as little more than chaff.

But the stakes in Catching Fire are higher not because of who’s competing in the arena, but what they’re actually competing against—not each other, but an unequivocally evil empire that has used them for pawns, and will continue to do so if left unchecked. They’ll do what they need to survive, but there’s more than survival at stake this time around, which changes both their approach to survival and its implications.

As Katniss, Jennifer Lawrence has a lot of emotional baggage to convey—including a love triangle with Peeta and her hunting partner/spurned love interest Gale (Liam Hemsworth) that’s rooted in complicated motivations far beyond the typical indecision and teenage lust. She does an admirable job of portraying someone who’s both a scarred survivor and a reluctant symbol. But Catching Fire is much more of an ensemble proposition than the first film, with Katniss serving as the nexus of schemes and factions more numerous and far-reaching than she can even really process. In addition to Malone, Claflin, and the other new tributes, Philip Seymour Hoffman provides a welcome wrinkle to the proceedings as the inscrutable Plutarch Heavensbee, replacing Wes Bentley’s highly sculpted beard as Head Gamemaker and President Snow’s main accomplice. The new faces seem to have inspired returning cast members to up their games as well: Both Elizabeth Banks, as outrageously festooned Capitol Representative Effie Trinket, and Stanley Tucci, as professionally ingratiating Hunger Games host Caesar Flickerman, find a welcome balance between chewing the scenery and conveying the creeping doubt of those aligned with the Capitol—all without being upstaged by their hilariously extravagant wardrobes and makeup.

Beyond the heightened story and performances, though, the whole hulking endeavor just looks and moves better than its predecessor, thanks to incoming director Francis Lawrence (Water For Elephants, I Am Legend), taking over for Hunger Games director Gary Ross. Lawrence made his name as the director of numerous high-profile, high-budgeted music videos and commercials, which might appear to be a good training ground for wrangling this high-profile, high-budgeted franchise. While a certain amount of bloat is unavoidable in a movie so beholden to fan expectations and blockbuster convention, Lawrence exhibits a simultaneous talent for fleetness and compression in dealing with Catching Fire’s many moving parts. He also has an eye that does better justice to the well-defined visual style of Collins’ original books than Ross’ more workmanlike take. He also brings a flair for suspense, bordering on horror, to some of the setpieces within the Hunger Games arena. The production design and wardrobe are flat-out gorgeous, befitting a franchise that’s made hundreds of millions of dollars, but also one rooted in the untenable schism between the haves and have-nots, illustrated via over-the-top consumption. It’s pretty, yes, but that prettiness has a point.

Catching Fire isn’t a true middle installment; the final book of Collins’ trilogy, Mockingjay, will be split into two films, per Hollywood’s recent pact to extend all young-adult franchises beyond their natural conclusion. But it follows the path of Collins’ second book almost to the letter, which means it functions as the middle of the trilogy in spirit, if not quite in artificially constructed sequence. And the film franchise blossoms in that book’s uncertain middle ground, exploring the implications and consequences of action, inaction, and deception, and exhibiting a willingness to embrace uncertainty and defeat that’s reminiscent of one of the all-time great middle installments, The Empire Strikes Back. It’s not just bigger, it’s better, and it bodes well for the future of the series, if not necessarily of its unlucky protagonist.