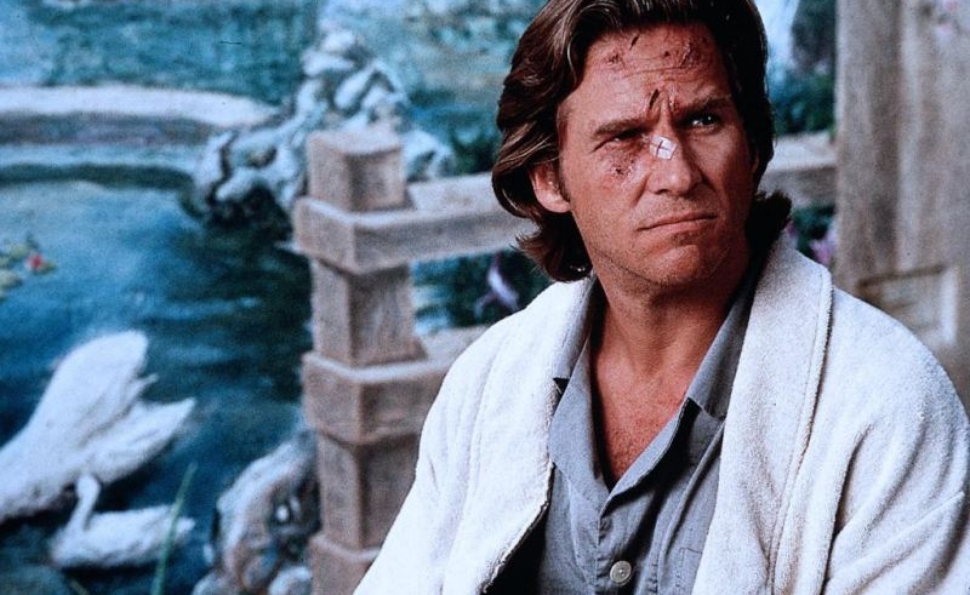 “You’re not dead,” Max Klein (Jeff Bridges) tells himself in a smudged motel mirror, shortly after stumbling away from a plane crash. As he walks away from the wreck, the camera settles on tiny details—a baby's empty slipper, an unbroken champagne bottle rolling across the scarred earth where his commercial flight landed and was ripped apart—until, as he passes the perimeter, someone asks him, “Were you in the crash?” and he answers, “No.”

Director Peter Weir lets the audience see the crash eventually, as Max gradually sifts through his near-death experience. But Fearless, which Rafael Yglesias adapted from his own novel, isn’t a movie about a traumatic event so much as about its aftermath, and the long, painful journey from Max’s motel-room epiphany to another, much later exclamation: “I'm alive!”

The difference between alive and not-dead seems like a semantic subtlety, or else the subject of some syrupy inspirational tract about senior citizens riding dirt bikes. But in Yglesias’ formulation, the difference comes down to fear. In Albert Brooks’ Defending Your Life, fear is what holds us back; people only regret the things they don’t do. But in Fearless, fear—not just overcoming it, but experiencing it—connects us to our deepest selves, and to each other.

Max Klein has no fear. To his way of thinking, he’s survived the worst there is—not only the bloody devastation, but the cold, hard proof that the universe plays by its own rules. Where the other survivors find closure, he’s closed off, his face frozen in a perpetual half-smirk as if he’s figured something out and is waiting for the rest of the world to catch up. The psychiatrist (John Turturro) the airline hired to counsel the survivors puts Max together with Carla (Rosie Perez), whose toddler son died in the crash, thinking that Max’s lack of affect and Carla’s impenetrable depression might spark something. But at first, he seems unable to fathom her grief, or at least incapable of saying anything to her that might actually help. Carla is a devout Catholic, and he goes with her to church, where she lights a votive to pray for her son's soul. But instead of talking to her, he unloads his newly formed theories on religious faith, not realizing that by the time he’s done, he’s turned his own reasoning inside-out:

“People don’t believe in God so much as they choose not to believe in nothing. Life and death: They happen for no reason. We think that people are born because their mothers wanted them alive, or because God needed another home-run hitter for the Giants. We think that we die because we eat red meat or rob banks. That way, even though we can never be good enough or careful enough to live forever, at least we can try. But if it makes no sense, if life and death just happen, there’s no reason to do anything.”

This is glib sophomore-year philosophizing, but it’s given force by the depth of Max’s belief—or rather, his determination not to believe. Facing his own fear, and living past what he accepted as the moment of his own death, has made Max feel invulnerable. He’s high on his own recklessness, wading into traffic or standing on the lip of a skyscraper’s roof, his arms outstretched and his face turned to the sky. It’s also cut him off from his wife (Isabella Rossellini) and son, the latter because he’s spending more time with an unaccompanied boy he led from the plane's wreckage.

To most of the world, Max is a hero: The Good Samaritan, as the media calls him, a moniker whose Biblical origins are entirely on-point. It was his voice, clear and calm, that helped passengers through the smoke and into a cornfield before what remained of the plane went up in flames. But Max won’t take credit for his good deeds, or even comfort from them, for reasons Fearless saves until the very end.

It’s hard to understand why Fearless—which, let’s be clear, is a straight-up masterpiece—has waited 20 years for proper home-video availability: Warner Archive’s Blu-ray marks its first release since the pan-and-scan era. Bridges’ performance ranks with his best, and Perez has never been better. (Benicio Del Toro can also be spotted as her weaselly husband, his voice a full two octaves higher than it is in the post-Traffic era.) It takes nothing away from Perez to say that viewers who watch the two interact closely will see Bridges giving her more than he takes, nurturing her character as well as his own.

Fearless has stray moments of glibness, as well as one truly intolerable character, an ambulance-chasing lawyer played by Tom Hulce who seems to start every other sentence with, “I know, I’m terrible, but…” (Hulce wisely makes him a bit of a klutz, so he’s more pitiable than enraging.) But even the comic relief doesn’t feel like a forced attempt to lighten the mood, so much as an acknowledgement that even at in its darkest hours, life can still be bleakly funny, like a champagne bottle rolling through a cornfield.