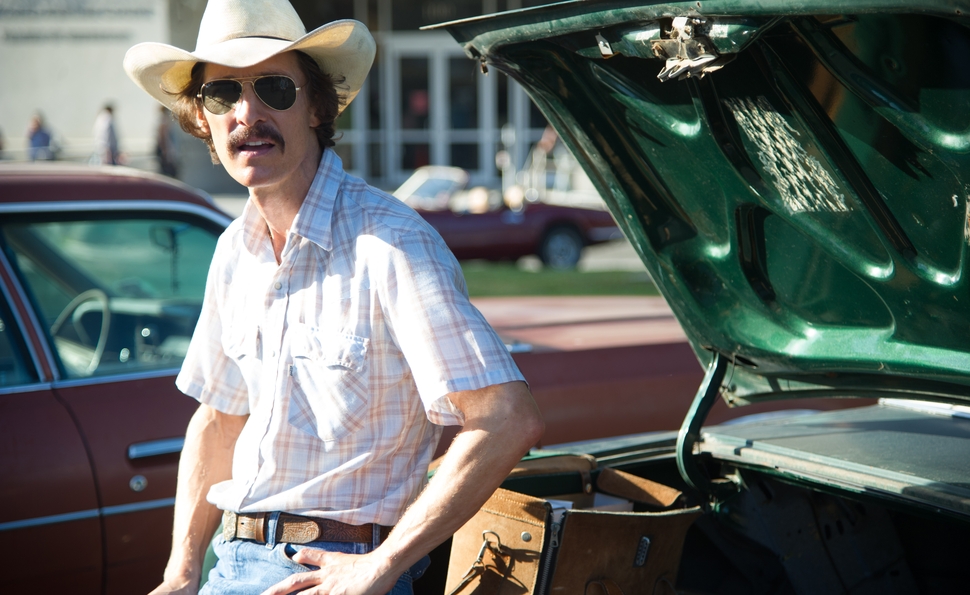 There’s something mighty familiar about the overall shape of Dallas Buyers Club, a based-on-real-life underdog story about an unlikely, colorfully flawed hero who took on the establishment to save lives. It most closely follows the Erin Brockovich pattern, while simultaneously drawing on familiar prestige staples from Philadelphia to Schindler’s List. As a film about a homophobic straight man navigating the AIDS crisis in 1985, when it was considered “the gay cancer” and HIV didn’t yet have a name, it resembles one of the many issue films where a white protagonist bears witness to (or helps avert) a crisis that largely affects people of color. Then there’s the physical-transformation element: To play AIDS patients, stars Matthew McConaughey and Jared Leto both starved off significant percentages of their body weight, whittling their bodies down to unhealthy, startling degrees. Any one of these aspects should be enough to sound alarm bells, suggesting a stunty film more interested in awards-mongering than integrity. But Jean-Marc Vallée’s film is more respectable than its tropes suggest. It’s a formulaic story that takes full advantage of these broad, familiar formulas to win viewers, but finds enough unique detail to retain its own identity.

McConaughey stars as Ron Woodroof, a hard-living good ol’ boy first seen taking bets on a bull-riding event at a rodeo, then fleeing when he doesn’t have the cash to cover those bets. Even his attempts to escape a murderous mob come with a casualness bordering on resignation; his choices in the moment suggest he’s been through this before, and is perfectly ready to do it all again tomorrow, between druggy parties with prostitutes, or randy rodeo hook-ups. Then an accident at his oil-field job sends him to the hospital, where a routine blood test shows he has full-blown AIDS; coldly clinical Dr. Sevard (Denis O’Hare) gives him 30 days to live. In the first of many tellingly bluff comments, Ron says he couldn’t have AIDS because he “ain’t no faggot,” and sashays away. But as his health deteriorates, he drops his denial and starts researching his condition. Before long, he’s schooling Sevard’s doctor underling (Jennifer Garner, in a thanklessly generic “stand around looking stricken and sympathetic” role) on the current state of AIDS research, and shouting down Sevard, who’s running trials on the new supposed wonder drug, AZT—in exchange for a healthy compensation for the hospital.

Dallas Buyers Club looks at the medical industry, and its intersection with the government, from an unquestionably judgmental angle. It unsubtly portrays Dr. Sevard and the medical community as too beholden to Big Pharma to explore any AIDS treatments that wouldn’t profit the company pushing AZT. And it further shows them as so lacking in empathy that a smarmy, self-satisfied homophobe like Ron is a more capable savior for the stricken. Devoted to his research, informed by personal experience, and lacking any drug-company obligations, Ron argues that AZT is being tested at lethal levels. On his own, he experiments his way toward a regimen of supplements and vitamins that keep him alive and raise his quality of life considerably. While facing constantly evolving persecution from the FDA, the IRS, the ATF, and the local cops, he starts smuggling in substances from Mexico and Japan, and opens a “buyers club” for hundreds of area AIDS patients—a legal workaround, since he isn’t technically selling them illegal drugs, he’s selling them club membership that gives them unlimited treatments.

From there, the film evolves from a beating-the-system drama into something more like a heist movie, as Ron magically morphs from a shit-kickin’, shit-talkin’, intolerant, ignorant hick into a medical and business mastermind, traveling the world in disguise, adopting a variety of disguises and characters, and running rings around the bemused government. Both poles of his personality are exaggerated and self-serving, while still as exciting as any good heist movie, and as satisfying as any good underdog story.

And yet, remarkably, the film avoids becoming a cartoon drama, in part by accurately tapping into the mixture of raw emotion and grim black humor that so often come with fatal illness. Vallée finds the balance between both without pushing for softer emotions. He never lets his protagonist complete the usual Oskar Schindler transformation into a weeping angel of mercy; Ron remains a tough, selfish asshole who hustles his way into helping other people in order to make the money he needs to keep himself alive, and to prove himself right and the medical establishment wrong. When Ron reluctantly partners with a flamboyant transsexual who goes by “Rayon” (Leto), he gradually wears the sharp edges off his homophobia, but only because day-to-day utility is more important to him than irrational hatred. The film doesn’t wallow in sentimental uplift so much as it grunts out a grudging tolerance for whatever works.

And while Ron and Rayon’s slow movement toward friendship follows an arc as predictable as sunrise and sunset, it also provides an acting showcase that helps ground the film. Leto is spectacularly committed to his fey but unwaveringly self-assured role. Given the freedom to play 10 different characters in one, McConaughey gives an outsized performance that brings a little charm and an immense amount of drive to his initially unlikable cowboy hero. Both characters are scripted (by Craig Borten and Melisa Wallack) as idiosyncratic and troubled in ways that make them more compelling, and more relatable, than conventional heroes. And Vallée gives the story a fleet frankness that keeps it away from maudlin excess. It relies on formula, but without underlining it. Dallas Buyers Club holds onto the details, like Ron’s snappish medical lectures and Rayon’s love of color, and uses it to build characters bigger than the clichés they inhabit. It’s a perfect example of how respect for real detail, and the complexity of actual people, can pull a teetering pile of tropes back from the brink.