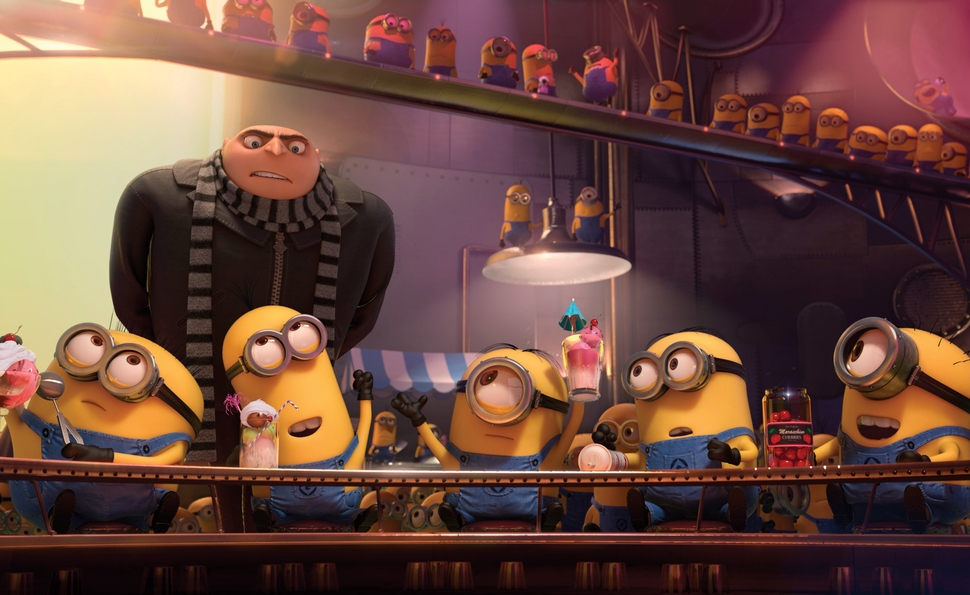 Pierre Coffin and Chris Renaud’s 2010 CGI movie Despicable Me was an enjoyable sugar rush of a movie with a sickly sweet sentimental center, but the breakout characters weren’t science-fiction supervillain Gru (Steve Carell) or the adorable orphans who reform him. The bulk of the attention went to the Minions, Gru’s yellow-skinned, nonsense-talking, comic-relief sidekicks. They became the collective face of the movie’s sense of humor, the anarchic spirit overlaying an otherwise-standard redemption story about a cranky old Grinch whose heart grows three sizes when he’s exposed to indomitable cuteness.

Even before the first movie came out, the marketers had a Minion-focused strategy in place, and with Despicable Me 2, that strategy has expanded considerably. Given the Minion-centric videogame spin-offs, theater PSAs, movie posters, teaser trailers, merchandising, ads for ancillary products, and even a Universal Studios Minion ride, the assumption seems to be that the public can’t get enough Minions. Despicable Me 2 sets out to test that assumption to its absolute limit.

This time out, Gru has reformed to the point where he’s trying to start a legitimate business making jelly, so he can raise his adopted girls, Margo, Edith, and Agnes (voiced, respectively, by Miranda Cosgrove, Dana Gaier, and Elsie Kate Fisher), in peace. Then, in a plot point borrowed from The Silence Of The Lambs, the Anti-Villain League recruits him to help locate a particularly threatening supervillain because he knows their personality traits and behavior; for fairly ridiculous reasons, this involves going undercover as the owner of a cutesy cupcake boutique in a suburban mall. (Imagine Hannibal Lecter helping Clarice by doing that.) At first, Gru resists and tries to stand by his mundane, idealized life, but in another familiar twist—this one from The Incredibles—he ultimately decides that civilian existence is just too boring, and that he misses the high-stakes adventures of his villain days. In a particularly Incredibles-esque touch, he’s hauled back in by an exaggeratedly toothpick-y pretty girl who gently implies his manhood is at stake if he doesn’t jump onboard.

So he eagerly tells his girls, “Gru’s back in the game, with cool cars, gadgets, and weapons!” But that line seems more designed to sell the movie in trailers than to fit the actual film. Despicable Me 2 does feature all three things, but almost none of them are Gru’s. In the first film, screenwriters Ken Daurio and Cinco Paul let Gru be a badass, in a rare case of consummate action-hero skills giving a character more nuance: He isn’t just a laughable bumbler, he’s capable and clever, and his high self-image isn’t deluded or hyperbolic. But Daurio and Paul limit Gru considerably in the sequel, where he’s ineffectual, hapless, fussy, easily distracted, or at everyone else’s mercy. While other characters get the real work done, he moons over capable AVL agent Lucy Wilde (Kristen Wiig), or plays creepy, furious Uncle Buck to Margo, who has actually dared to take an interest in a boy. He’s a defanged domestic, which undercuts the first movie’s idea that he’s happier as a dad than when he’s bad. 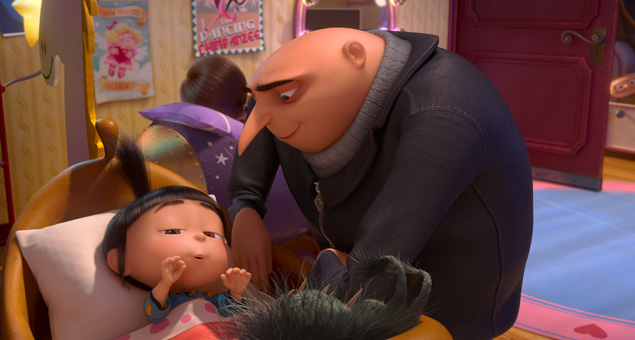 There are a wide assortment of other threads and bits of comic business throughout Despicable Me 2, especially involving the Minions, who steal or pad out so many scenes that the film would be little more than a short without them. The film features no fewer than three Minion cover songs sung in nonsense-babble, including All-4-One’s “I Swear” at a tender moment, and the closing “It’s the end, everyone dance!” number that’s become the standard ending move for CGI movies that have run out of ideas. And the movie’s eventual primary plot hinges heavily on the Minions, who run afoul of the villain Gru is supposed to be tracking down at the mall.

So for the most hardcore Minion-lovers, there’s plenty going on in Despicable Me 2: Minion slapstick, big Minion action setpieces, and plenty of time spent just watching Minions be Minions, squabbling or singing or snickering among themselves over anything that sounds like a fart or a mildly naughty word. Their appeal is understandable: They’re crazy children who pour on the wacky, harmlessly violent Three Stooges physical humor, but they double as Gru’s capable, loyal friends, so they can immediately transition to sweet or useful, as a scene requires. But a movie with so much Minioning that it dilutes or hijacks every other storyline seems like too much of a good thing.

Despicable Me 2 has its charms, in its spritely pacing, a rapid-fire gag-delivery system that hits as often as it misses, and especially in its innovative, expansive use of 3-D space. But even that gets Minioned up, particularly in the credits sequence where the Minions (as they did in the first film) goof around with effects that will only work for 3-D viewers. By the time they’re done blowing bubbles and noisemakers into the audience, the joke has worn thin. But for those who disagree, there’s plenty more Minion action coming in the 2014 prequel titled, naturally, Minions. Maybe once they have their own story, they can leave a little more room for the other participants in this franchise.