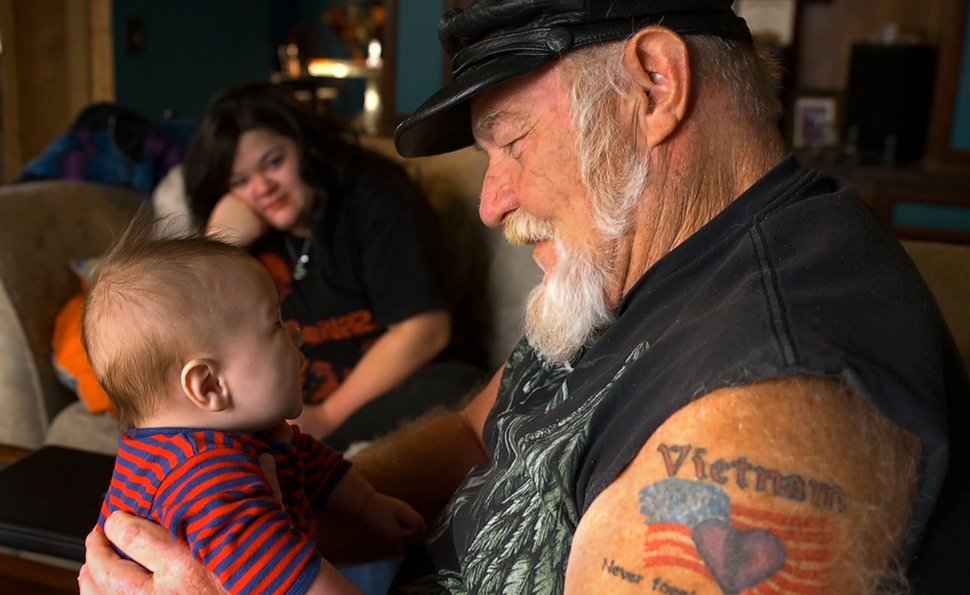 There are, at minimum, five different stories going on in Stray Dog. Debra Granik, director of the mesmerizing Oscar-nominated 2010 drama Winter’s Bone (Jennifer Lawrence’s breakthrough movie), met gruff biker Ron “Stray Dog” Hall while working on the film; he plays a minor role as Ozark drug supplier and patriarch Thump Milton. Fascinated by the microcosm of Americana she saw around Hall, Granik checked in with him repeatedly over the course of several years, as he married a Mexican immigrant, joined a cross-country bike trip from Missouri to Washington D.C., attended a series of military-veteran funerals, and more. The film that emerges from all these snippets of life feels disjointed and particulate, with people coming and going free of context, and events whipping by with baffling speed. There’s so much going on that the film feels like a hyper-extended trailer for a full season of a reality miniseries. That said, if Stray Dog were a trailer for a longer project, it would do a hell of a job of selling its product.

One thread of the film involves Hall’s past as a Vietnam veteran, and his present as a Patriot Guard member and informal therapy evangelical. He’s a big, chuckling white-haired bear of a man, with a rough sense of humor and a biker-gang wardrobe, but he breaks down in tears as he tells his counselor about atrocities he committed in the jungle—including cutting off and wearing a corpse’s ears—and he’s grave, gentle, and supportive when hearing other PTSD-stricken vets weep as they tell their own gruesome stories. His attitude—that it’s not his place to forgive himself—is unconventional, but winningly mature and self-aware. And as he attempts to atone for his past, Granik observes him at several veterans’ rituals, where it’s eerily possible to see the crisp young Marines under all the paunchy old men as they wheel, march, and salute in military style, at graves or at a POW remembrance meeting. (Hall was Army Corps Of Engineers, then infantry, but Marine gear seems to dominate at events he attends.)

But Stray Dog also focuses on Hall’s marriage, his attempts to learn Spanish to better communicate with his wife Alicia, and the struggle to bring his teenage stepsons to America. It deals with his work managing an RV park in a rural Missouri not unlike the one seen in Winter’s Bone, without the meth and threat, but with all the desperate poverty. It deals with his granddaughter, an independent but defeatist girl Hall can’t convince to go to college. It follows him on the annual Race For The Wall, a cross-country biker pilgrimage to honor fallen veterans at D.C.’s Vietnam War Memorial. Any of these arcs would make for a plausible film, and given Hall’s complicated, surprising persona—gruff but good-natured, bluff but emotional, opinionated but philosophical and open-minded—any of them would have been fascinating and revealing.

But by jumbling every possible aspect of Hall’s life together, Granik loses detail and focus where it matters. It isn’t always clear where he is during the events she observes, or how he’s reacting to what seem like major moments. A vet’s trip to deal with a dog’s swollen eye gets more screentime than Hall’s reaction when Alicia calls to say she needs to be with her sons, so she’s decided to stay in Mexico. There are no interviews, talking heads, or intertitles to mark locations, the identities of the bit players who flow through Hall’s life, or the passage of time as years go by. The result is a somewhat timeless piece, without an unnatural sense of forced or artificial narrative, but it also feels like Granik is too close to her subject to judge her material, and which moments have weight, or need explanation.

The film is full of funny sequences; some are wry, as when Hall reminisces about lifting his Vietnam squad members’ penises aside to burn leeches off their testicles, and the “You gotta do it for them so they’ll do it for you” attitude that came with the act. Others are lighter, as when Hall’s stepsons, trying to learn English via a bilingual dictionary, are baffled to find that “pussy” means “a small cat,” and wonder why Hall is so adamant about the importance of not being one. But even these moments have a continuity-free disconnect.

Random-access or not, Stray Dog is often powerfully moving, due to Granik’s intimate access to Hall and his family, and the overwhelming and openly expressed feelings on display. Whether Hall is replacing a rotted-out floor for a woman whose soldier daughter recently died, or confronting his granddaughter with, “You scare me, chile, ’cause I don’t know where you’re goin,’” he’s a solemn but expressive man who openly lives what he believes. Stray Dog is striking because the idea of a tough, aging biker behaving with fearless confidence is such a familiar media narrative, but nothing about Hall’s unique blend of humility and pride fits the stereotype. The film lacks the narrative tightness, stark beauty, and gripping intensity of Granik’s feature-film work. But it has much of the nuance, and the emotional impact. There are worse things to say about a documentary than “It leaves viewers wanting to spend much, much more time in its world.”