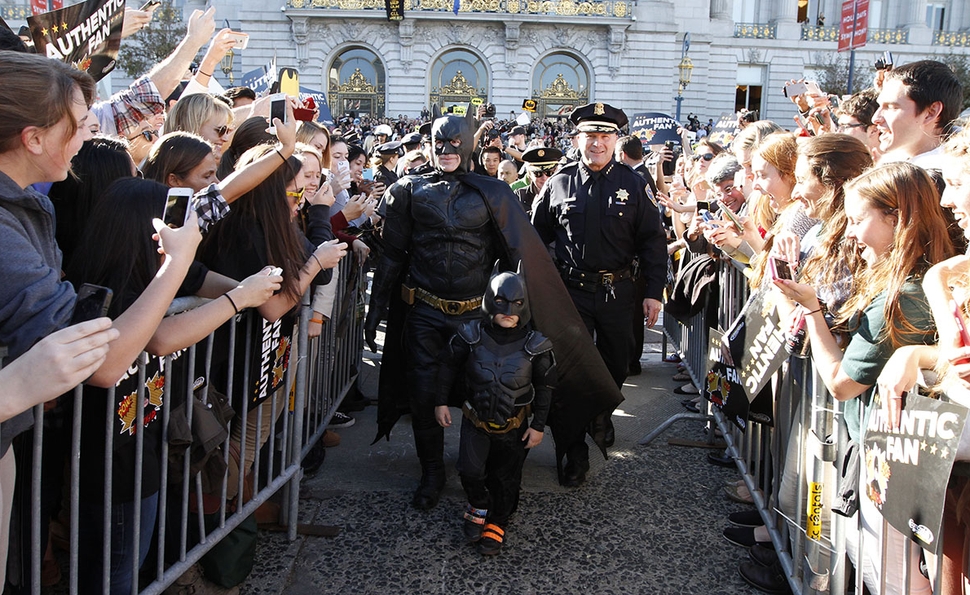 As a commercial for the Make-A-Wish Foundation’s charity work for desperately sick children, the cheery documentary Batkid Begins is unbeatable. Even as a pick-me-up in a field of frequently depressing and exhausting docs about how we’re running out of clean water, accessible oil, and time to change our wasteful ways, it’s refreshing and moving. And on purely stylistic grounds, it’s a fleet, upbeat film that gains a lot of power simply from up-close-and-personal access to a situation that hundreds of millions of people accessed from remote outside views. But director Dana Nachman and her co-writer, Kurt Kuenne, are so intensely bent on positivity that it’s hard not to feel a tiny smidgen of doubt. The film’s narrative doesn’t always match visible reality. Fortunately, the tension between those elements is as almost as compelling as the story Batkid Begins is consciously selling.

Social-media addicts may remember the Batkid story from 2013, when Facebook, Twitter, and hundreds of news outlets spread it to a reported 117 countries and possibly more than a billion people. Nachman’s documentary starts years before that, when 18-month-old Miles Scott was diagnosed with leukemia. His father Nick, a fourth-generation farmer, and mother Natalie spent the next several years fighting the disease; when the Make-A-Wish Foundation said Miles was eligible for a wish, his parents put off the process until he was 5 years old, finished with chemotherapy, and strong enough to enjoy the adventure. He proclaimed his wish was “to be a real Batman,” like his idol, Adam West. And then the wheels started rolling. Bay Area Make-A-Wish CEO Patricia Wilson built an elaborate plan to let Miles run around San Francisco for a day in a mini-Batman costume, confronting the Riddler and the Penguin. The Foundation put out a call for volunteers to form a crowd for Miles’ end-of-day heroism ceremony, but once social media and worldwide news networks got hold of the story, driven by a perfect storm of human interest, kid-cuteness, beloved pop culture, and an enviable fulfillment of a common fantasy, the entire business spiraled into something monumental and unpredictable.

Nachman and Kuenne make a few highly questionable decisions, particularly in presenting the Scott family’s backstory as an animated four-color comic that turns Miles’ diagnosis and his parents’ reaction into something glib, shrill, and laughable. But they get plenty of interview access with Nick and Natalie—a cute, personable, down-to-earth couple who express themselves with self-effacing good humor—and to Wilson, a challenge-oriented firebrand with plenty of ambition. And they have the bright idea of constructing Batkid Begins like a heist film, laying out the plan for Miles’ adventure in minute-to-minute detail, building up the stakes and anticipation for how it’s meant to work, before actually delving into process. Then they bring in charming supporting players like Eric Johnston, an acrobat and inventor who donned a Batman outfit to play Miles’ escort throughout the day, and Mike Jutan, a Lucasfilm software specialist who hammed it up as the Penguin. Their enthusiasm and creativity as they work out the details becomes immensely infectious.

And as more and more outsiders jump on board the project, the sense that literally anything might happen next keeps the story surprising. Batman Begins and The Dark Knight composer Hans Zimmer spontaneously composes and records a Batkid theme for the project’s video prompts. San Francisco’s mayor and police chief agree to play themselves in the story. The San Francisco Opera builds custom costumes for the adults, while a little boy with his own dad-made custom Batkid costume gives it up for Miles. The business becomes a day-long, city-wide LARP, with people flying in from around the country just to be in the massive crowds cheering Miles on as his motorcade zips from one planned event to another.

One quiet fly in all this ointment: as Batkid Day becomes a city-wide celebration of fantasy and fun, Miles himself seems nonplussed or even overwhelmed by a lot of what goes on around him. Johnston jokes at one point that they’re mounting an immense production where the star is 5 years old, has never rehearsed, and doesn’t even know he’s performing, and as the project morphs into a public-relations heyday, Miles seems determined to blow his cues. The movie’s most questionable moment comes when he flags midway through his day as a crime-fighter, and says he’s ready to go home. After some lip service about not pushing him, the adults charge forward with their plans. There’s nothing inherently wrong with that, any more than there’s a problem with parents pushing their children to continue enjoying a zoo outing when momentary weariness or kid-distractability interfere. Miles gets a second wind, as kids do, and moves on. But it’s hard to miss when the bystanders are more absorbed and engaged than their tiny hero of the moment. (If Julia Roberts’ planned Batkid fiction feature happens, that’s guaranteed to be the first thing that changes.)

Even with Miles hovering hesitantly as Johnston runs him through the program, the Batkid story is largely a blast. Nachman captures a wealth of adorable details: a “KEEP CALM AND GRANT WISHES” sign outside Wilson’s office, a hand-made cardboard “KAPOW!” a bike cop mounts on his motorcycle handbars, Johnston’s clever ad-libs whenever things go slightly awry. Miles’ adventures were heavily documented from a variety of angles, so the footage is simultaneously spectacular and intimate, with plenty of adorable-child moments. The film covers the big picture of how the events affected the city, but isn’t afraid to get granular, interviewing an Uber driver swept into the Batkid motorcade, or a policeman who’s delighted at the friendliness and cooperation of the Batkid crowds.

Still, the script is sometimes aggravatingly and unnecessarily forceful about trying to make all this bigger than it is. When Miles climbs stairs to chase the Penguin, the voiceover talks about him symbolically battling the demons of his illness. A coda about how a kid taught adults how to play again seems achingly on-the-nose. And the quiet question of how many of the high-profile participants saw an opportunity for free PR wouldn’t matter so much if the script wasn’t so relentless about how selfless and generous Miles’ adventure made everyone. Batkid’s story is fun in part because it’s so joyously frivolous. He’s cute because he’s a tiny version of a big thing. Trying to blow him up into something bigger than he is spoils some of what makes him special.