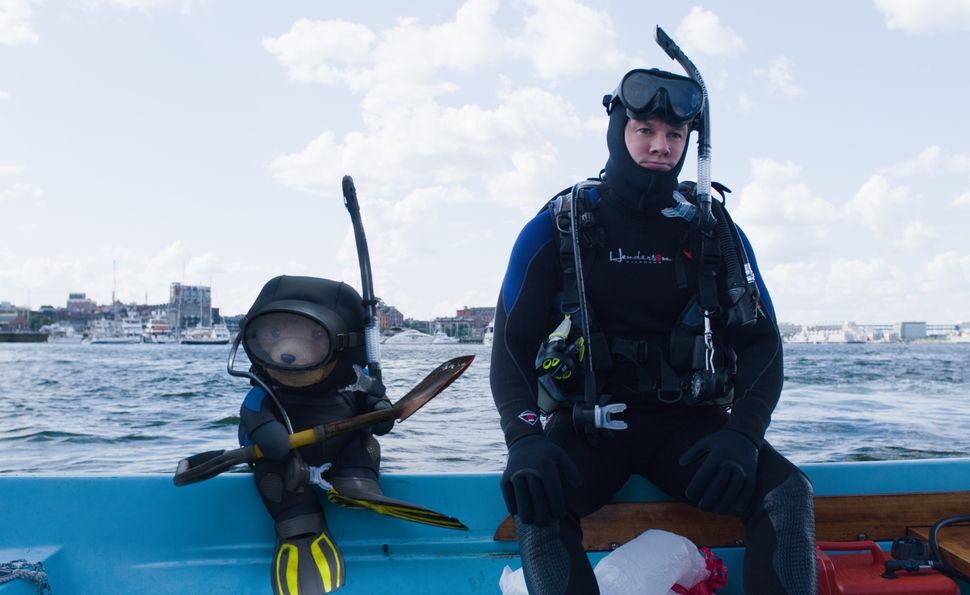 One of the cleverest jokes in Ted 2, the sequel to Seth MacFarlane’s hugely successful 2012 comedy Ted, is also one of the laziest. Seeking to cheer up in the wake of a major disappointment, rude-and-crude sentient teddy bear Ted (voiced by MacFarlane) and his best human, John (Mark Wahlberg), partake in one of their favorite pastimes: yelling out bad suggestions at the local improv. The two call out prompts like “Ferguson, Missouri,” “Bill Cosby,” and “the offices of Charlie Hebdo” to an increasingly frustrated and fearful group of improvisors, whom a delighted Ted admonishes to “make some fuckin’ comedy.” Coming from the pen of obstinately provocative writer-director MacFarlane, the point of the joke is clear: There are no taboos in comedy, at least for those capable of finding the humor in those taboos. That philosophy drives Ted, and all MacFarlane’s comedy to some extent, but the way the joke is executed in the film—with neither Wahlberg nor the CGI Ted in the static shot, their timely joke suggestions all dubbed in after the fact—speaks to MacFarlane’s corollary philosophy of always taking the easiest road, be it high or low, on the way to a punchline.

That sense of lazy audacity permeates Ted 2, which overextends its forebear’s hit-or-miss, bro-centric comedy, significantly weakening it in the process. Where Ted managed a respectable ratio of clever (or at least transcendently dumb) gags to lazy/offensive ones, Ted 2 is a repetitive, self-congratulatory slog, dragged down by a haphazard plot and the same third-act problems that ultimately sunk the first film. The fact that Ted 2 goes off the rails during its conclusion in the exact same way that Ted did speaks both to MacFarlane’s confidence in his ideas, and to his tendency to run those ideas into the ground. A few moments in Ted 2 benefit from that bullheaded assurance—an elaborate opening-credits song-and-dance number amplifies a conceit MacFarlane has used time and again in his series Family Guy and elsewhere.—but many, many more suffer from it.

MacFarlane’s screenplay (co-written, once again, with his Family Guy cohorts Alec Sulkin and Wellesley Wild) ostensibly ratchets up the stakes from the first film, which at its best functioned as a hangout comedy between two potty-mouthed, pot-smoking numbskulls. This time around, Ted has wed his gum-popping lady-love Tami-Lynn (Jessica Barth), and decides the best course of action for salvaging their increasingly troubled and contemptuous marriage is to have a child. (A patently horrible idea that Ted 2 seems to acknowledge it’s horrible, then goes through with it anyway.) After a few false starts involving adoption and artificial insemination—seemingly conceived with the end goal of subjecting Wahlberg to an elaborate semen-based indignity—Ted’s paternity quest hits a wall when he learns he’s “not a person” in the eyes of the law. He’s subsequently fired from his cashier job, his marriage to Tami-Lynn is annulled, and all his store rewards cards are revoked. So Ted, with John’s help, seeks out attorney Samantha L. Jackson (Amanda Seyfried, filling the wide-eyed cool-girl post Mila Kunis wisely vacated after the first film) to help Ted establish his personhood in the eyes of the law.

Ted 2 gets irredeemably muddled once Samantha enters the picture. As an ardent pothead herself (as well as a pop-culture naïf who facilitates lots of easy reference gags), she slots easily into Ted and John’s world of bong rips and banter. But there’s also the matter of Ted’s landmark civil-rights case to attend to, and MacFarlane’s script combines the two modes with all the finesse of Peter Griffin struggling to open some blinds. Setting aside the fact that Ted’s case opens the avenue for lots of uncomfortable comparisons between his struggle and those of black and gay people over the years—an avenue Ted 2 gleefully barrels down with little regard for tact or sense—the resolutely misanthropic, destructive behavior that forms the cornerstone of John and Ted’s friendship makes it all but impossible to root for their success or happiness. Ted 2 briefly feints toward acknowledging this fact, but backpedals so rapidly (and half-assedly) that it might as well have never happened. Ted 2 takes so much delight in being bad, it can’t pull off being good when it needs to be.

Ted 2 isn’t wholly devoid of laughs, or even brief flashes of brilliance. The MacFarlane Comedy Machine’s penchant for cut-away gags and pop-culture-based humor is on full display throughout the film’s draggy 115 minutes, but for every five reference-based jokes that miss, there’s usually one that hits. (An unusually subtle gag involves Patrick Warburton, returning as John and Ted’s friend Guy, roaming the halls of New York Comic Con dressed as The Tick. In a rare display of restraint, that’s never remarked upon.) But the movie makes no attempt to stretch itself, challenge its audience, or even function as a movie most of the time: As a director, MacFarlane gives Ted 2 all the visual panache of a traditional network sitcom, and the film’s plot is so muddled, it scans more like three half-hour episodes stitched together. Giovanni Ribisi’s return as the first film’s villain, Donny, seems ported in from an earlier version of the movie that was ditched, and no one thought to tell him.

It’s theoretically fine for Ted 2’s heroes to be offensive, lazy, dumb, sexist, and racist. Lots of movies, including the first Ted, have found value in that approach. But the writing and filmmaking around them needs to rise to a higher level in order to justify such cynicism. Instead, MacFarlane’s film sinks to Ted and John’s level and lower, shoveling shit at the audience and asking them to beg for more. Please, audiences, don’t beg for more.