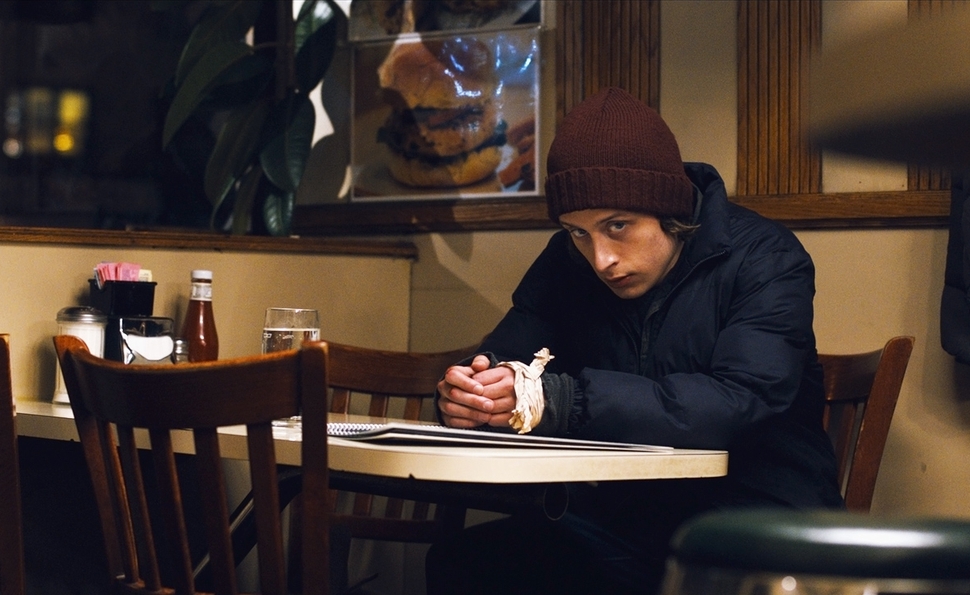 The wait for Gabriel’s release has to have been hard on first-time feature filmmaker Lou Howe and actor Rory Culkin. The film debuted at 2014’s Tribeca Film Festival as an indie looking for a distributor, but in spite of enthusiastic reviews, it wasn’t immediately picked up, and it’s languished on the shelf for more than a year. In part, that may be because of its uncomfortable, complicated subject, and its lack of a rousing feel-good ending. But it’s been a frustrating wait nonetheless, because it has such potential to be a name-making project. Culkin’s terrifically effective performance and Howe’s pitch-perfect writing and directing make Gabriel the kind of insightful, empathetic project that makes cineastes feel good about feeling bad.

The movie doesn’t bother with exposition or pointless “I know you know this, but I’ll tell you anyway” dialogue. It’s lean and effective, with nothing wasted. The title character (Culkin) is introduced on a road trip to meet a girl; it’s initially unclear who he is, who she is, or what he wants from her. Howe’s script simply watches Gabriel in action, and quietly makes it clear that he’s uncomfortable in his own skin, and perfectly willing to make others equally uncomfortable if that gets him what he wants. He’s needy and pushy, though with a puppy-dog sweetness that draws other characters’ sympathy, even when his behavior doesn’t necessarily warrant it. But his straight-arrow older brother Matthew (David Call) and his strained mother Meredith (Deirdre O’Connell) have lost patience with him, and even when they feel those sympathies, they try not to act on them. As the story develops (and it’s a simple story, so the less said about it up front, the more there is to discover), their complicated reactions to Gabriel reveal a vast inner conflict about him, and say far more about their shared history than explanatory speeches would.

Gabriel is in part a portrait of mental illness, inspired by the struggles of one of Howe’s longtime friends, but presented without dramatic fireworks, or one specific diagnosis that would prompt viewers to diagnose or pigeonhole Gabriel. Instead, Howe presents a simple conundrum: His protagonist wants different things than the people around him. His past leads them to limit him in ways that bring them into constant conflict, and his present situation makes it impossible for him to see their point of view. Culkin’s performance is stunning: Without showboating or grandstanding, he presents a kid who’s desperate but also doesn’t realize how desperate he is, and who’s simultaneously deeply sympathetic and horrifying in his inability to relate to anything outside of his obsessions. Gabriel makes dangerous, even cruel decisions without seeing how they affect other people, and their attempts to cope with him are heartbreaking. O’Connell in particular delivers a fantastic performance, walking the line between stifling her son and supporting him, engaging in tough love and trying to tamp down her love to do what she thinks is necessary.

Gabriel is a strikingly assured debut, but it’s particularly strong in the subtlety and nuance of its script. Howe’s family dialogues feel particularly plausible in a way that’s rare onscreen. There’s nothing stagey or presentational about the way these characters talk; Howe finds time for comfortably familiar in-jokes, and shows how they function as relaxing conversational grooves. In other similarly small ways, he conveys a sense of people actually talking to each other, instead of talking for a camera’s benefit. The production design is more stylized and noticeable: DP Wyatt Garfield gives the film a flat blue-grey tint, and the costuming and production design follows suit, turning Gabriel’s world into an endless progression of grey cars and houses, drab clothes, and withered winter trees. Howe frequently pushes his camera in close, for painfully intimate examinations of Culkin’s pale, hectically flushed skin and wounded eyes, but the film isn’t so stylized as to be distracting.

Gabriel’s story is simple, but the emotions behind it are endlessly complicated. All the characters are driven by visible hungers: for normalcy, to be liked, to be safe, for answers, for goals. But they rarely lay these hungers out nakedly for each other. The film feels voyeuristic in the best way, because the audience has a chance to get in close and see what drives Gabriel and the people around him, and why there’s no possible way for them to all get what they want. It’s a small, cloistered, quiet drama, and a deeply personal one. It’s also an unsettling, uncomfortable one. But when discomfort is this well-executed, it becomes its own form of comfort—the feeling of being in good artistic hands.