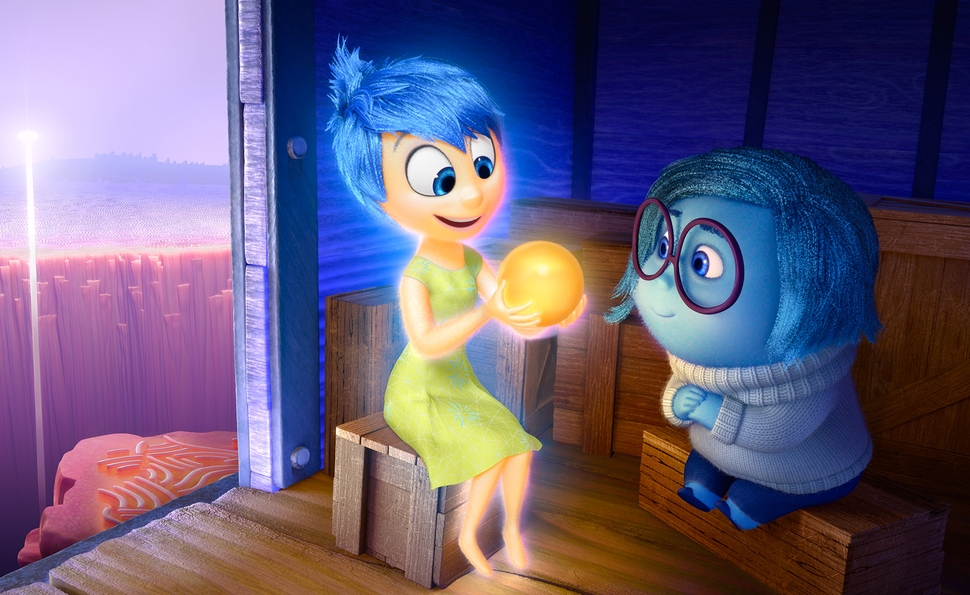 Over the course of a few relatively breezy minutes at the beginning of Inside Out, Pixar vet Pete Docter, co-director Ronnie Del Carmen, and Docter’s first-time feature co-writers Meg LeFauve and Josh Cooley establish a simple scenario. Their protagonists are anthromorphized versions of emotions inside the head of a 11-year-old girl named Riley. Five stylized, colorful characters—Joy, Sadness, Anger, Fear, and Disgust—represent Riley’s emotional response to events around her. As the emotions come into conflict, they negotiate, deliberate, or simply shove each other aside, and step up to take turns at the control panel of her mind.

The idea of personifying aspects of the human experience to show how feelings and intellect conflict isn’t new: Plenty of other creators have played with it in the past. But while other Pixar productions like the Toy Story movies, Monsters, Inc., and Up (the latter two directed by Docter) have stood out in a crowded animation field for their innovative ideas, what really distinguishes Pixar films is the way they take surprising narrative risks and dig deeply into painful emotions that most kid-friendly films strive to avoid. Inside Out does it more literally than other Pixar films, but it does it magnificently. There are endless comedic possibilities in the scenario of five demanding emotions fighting for dominance, and the film periodically toys with those possibilities to lighten the mood. But mostly, it uses the setup to explore why emotions exist, how they change as people grow up, and how a simple surface reaction might come from complicated inner conflict. Inside Out has a rich, unpackable story. But like all Pixar’s best films, it’s fleet and accessible, trusting the audience to keep up with an adventure that unfolds at a breakneck pace.

Docter and his team make keeping up easier by establishing a clear visual language early on. Each emotion has its own distinctive color: Joy (Amy Poehler) is an effervescent sprite with a yellow Tinkerbell glow. Sadness (Phyllis Smith) is a glum, depressive blue. Anger (Lewis Black) is fiery red, Disgust (Mindy Kaling) is sickly green, and Fear (Bill Hader) is a faint purple. As Riley has experiences and creates memories, they manifest as glowing spheres, each loaded with a little video clip of the memory, and tinged with the color of the emotion most associated with it. As memories build up in the control room throughout an average day, it’s easy to see from the color of the shelves whether it’s been predominantly a happy day, a glum one, or a confused mix of different emotions. And certain core memories, stored in a special area, are associated with “personality islands”—elaborate mental worlds built around key experiences with special meaning.

As the film begins, with Riley and her parents (Diane Lane and Kyle MacLachlan) moving cross-country for her dad’s latest career opportunity, Riley’s life has largely been upbeat. But the move is a disappointment, and Riley feels isolated from the friends, family, and hobbies that gave her life meaning. Perky Joy has her hands full trying to put a brave face on events, and keeping the other emotions at bay. She’s sweet enough, but also bossy, demanding, and even selfish, after 11 years of stability and deference from the others. Then an accident pulls Joy and Sadness out of the control room and into the depths of Riley’s mind. As they struggle to return, Fear, Anger, and Disgust necessarily take over.

It’s best not to focus too much on the absolute mechanics of key emotions getting yoinked off into the obscure parts of a girl’s brain due to a plot-oriented misadventure. Much of the story works beautifully as metaphor: When Anger and Disgust desperately try to emulate Joy, for instance, the result is adolescent sarcasm. And while Joy fights to keep Sadness out of Riley’s mind, the repression seems to just make Sadness more pervasive. The more literal aspects of the story, involving a lot of physical running around amid memories and jokey mental constructs like a Train Of Thought and the scary basement of the Subconscious, get fuzzier and harder to reconcile with the metaphor. The film skims lightly over questions of where the balance of control lies between Riley and her emotions. (But then, philosophers have grappled with understanding the balance between the mind and the body for centuries; it’s no wonder a 94-minute animated film doesn’t handily solve the conundrum.)

The filmmakers deliver all the expected elements of an animated adventure: There’s a lot of running and tension, with an imposed looming deadline. There are also enough surprises, wisecracks, and visual jokes to mostly keep the tone light when it’s appropriate. (A gag involving a persistently annoying memory-sphere—a gum-commercial jingle that keeps finding its way up to the control room—is a particular highlight. So is the entire movie-studio mechanism that produces dreams: Watch for posters touting past nocturnal productions like Something’s Chasing Me and I Can Fly!) But the script makes the stakes bigger than whether one 11-year-old can learn to be happy again. Joy and her fellow emotions conflict on how to react to Riley’s circumstances, but they all care deeply about her, and worry about where she’s headed. And through their passionate concern, Docter builds the audience’s deep engagement with how Riley feels, how she expresses it, whether she can make herself understood to other people around her, and where her feelings take her.

Part of the miracle of Inside Out is how rapidly and well it establishes its inner world, to the point where throwaway gags become plot-relevant and insightful. A brief look inside the heads of Riley’s parents reveal that Sadness rather than Joy is at the controls in her mom’s head, while her dad is overseen by Anger. It feels just as significant that her mom’s emotions work together quietly and thoughtfully, while her dad’s emotions treat Anger like a drill sergeant keeping everyone in line. The film’s innovation isn’t in creating an inner world, it’s in using the production design to elaborate on it without exposition, and in turning every variable and divergence into a clever point of characterization that reveals salient new information.

But the other half of the equation lies in the film’s ultimate goals. Like so many Pixar films, Inside Out uses a rambunctious, chaotic adventure to shape a story about growing maturity and understanding. In a deeply evocative way, it’s about coming to terms with sadness (or in this case, Sadness) and still moving forward. And it draws on recognizable, relatable experiences and feelings cleverly, in a way that isn’t entirely tied to a single age or experience. Pixar vets will remember the profound emotions brought up by the opening sequences of Up, the final scenes of Toy Story 3 and Monsters, Inc., and so many other watershed moments in the company’s library of films. Inside Out not only evokes that profundity of emotion, it does it with emotions capable of examining their own response. The emotional control room isn’t a new idea. Inside Out just manages the most ambitious and expressive version of that idea to date.

Note: Inside Out screens with a deeply oddball musical short, “Lava,” about a lonely volcano pining for a lover. Or more precisely, as the lyrics put it, “someone to lav-a.” It’s mighty pretty in the animation, it lays on the wistfulness as thick as a lava floe, and the Hawaiian-style ukulele tune is repetitious and bouncy enough to become an earworm. But even leaving aside the standard-issue gender dimorphism in animation—for some reason a male volcano can be shaped like a barely anthropomorphized mountain, but a female volcano has to be tall and thin and have long “hair” and a rounded, pretty face—the story doesn’t make a whole lot of sense. But hey, at least those sad volcanos get to date each other, right?

GoWatchIt: Buy. Rent. Stream Inside Out